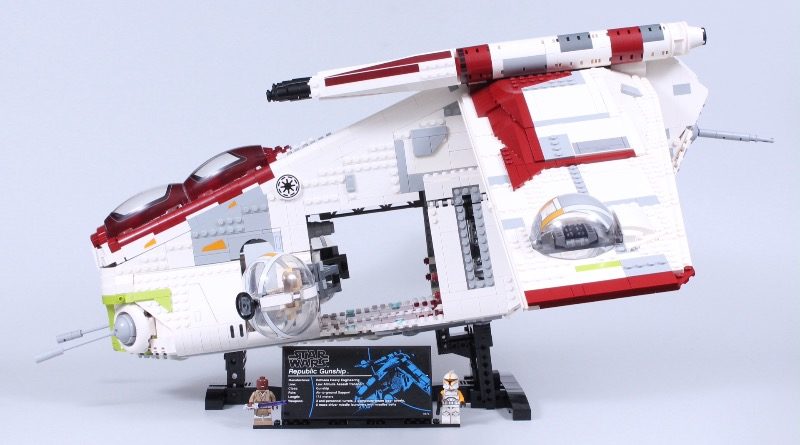 The long-awaited 75309 Republic Gunship is finally here – but does the first LEGO Star Wars UCS set based on a prequel trilogy vehicle since 2010 deliver everything we’ve been asking for?

More than 30,000 fans are responsible for ensuring 75309 Republic Gunship would land on shelves in 2021, having voted in droves for the iconic troop transport in a LEGO Ideas poll last February.

A potential UCS TIE Bomber and UCS Nebulon-B Frigate will have to wait: this is the time of the prequel trilogy kids, who grew up enthralled by George Lucas’s adventures in CGI and are now presumably ready to throw down big, LEGO for Adults-sized budgets on LEGO Star Wars sets.

75309 Republic Gunship is the first real opportunity we’ve had to do that – so with the weight of 30,000 fans’ expectations on its shoulders, can it live up to the hype, and kick-start a new wave of Ultimate Collector Series sets based on The Phantom Menace, Attack of the Clones and Revenge of the Sith?

Probably the biggest challenge in realising any LEGO Star Wars ship that regularly commands a £100+ fee in UCS scale is, well, figuring out that scale without entirely blowing the budget. Given the last playset version of this ship came in at £109.99 / $119.99, that could easily have happened with 75309 Republic Gunship, in an effort to really and truly set it apart from its minifigure-scale predecessors.

But credit to designer Hans Burkhard Schlömer: he’s managed to keep the price from ballooning to 75192 Millennium Falcon and 75252 Imperial Star Destroyer levels, while still delivering a ship that goes above and beyond the scale of previous Republic Gunships and, in doing so, feels very worthy of that Ultimate Collector Series badge.

It’s hard to get a sense of that scale from the box alone, though: once again, the muted 18+ packaging really undersells one of the LEGO Group’s most expensive sets, and the awkward angle of the main image doesn’t really help. For a better idea of what to expect from the sheer size of 75309 Republic Gunship, look to the photos in this review (and even the official lifestyle images).

Part of what makes that scale so deceptive is that this Gunship uses exactly the same ball-joint pieces for its forward turrets as the minifigure-scale versions. As Hans told us in a recent roundtable interview, there’s a very specific reason for settling for those same elements, and they’re embellished with curved bricks to communicate the scale.

But given those turrets are one of the first things your eye is drawn to when taking in the Gunship’s box art, nobody’s going to judge you for underestimating the size of this set. Just make sure you do know what you’re getting yourself in for, because it’s an absolute beast. (You’re going to need a bigger boat shelf.)

Refreshingly for a LEGO Star Wars UCS set, the early stages of the build are surprisingly Technic-lite. Recent models including 75252 Imperial Star Destroyer and 75275 A-wing Starfighter have relied heavily on a core Technic frame to support the weight and stability of their outer shells, but 75309 Republic Gunship instead falls back on a traditional (and welcome) mix of plates and bricks.

That’s not to say it’s entirely absent of Technic, and in fact what little there is actually has an even greater role to play in realising the structural integrity of the Gunship. The troop bay is entirely hollow, which means the bar that runs along the top of it has to do a lot of very literal heavy lifting in supporting the ship’s enormous wingspan.

Somewhat ironically, that Technic segment is actually the least sturdy part of the construction process. Once the core bar is in place, you’ll need a delicate (yet somehow simultaneously firm) touch to continue building up and around the rear of the fuselage. It’s a challenging moment in what’s actually a pretty challenging build on the whole, well worthy of that 18+ tag (even while the LEGO Group is adamant it doesn’t denote difficulty).

There are some tricky angles involved in adding various sub-assemblies, for instance – the underside of the wings springs to mind, and that’s a particularly cumbersome section given most of the Gunship is already in place by that point. It’s not often you’ll need to get up and walk around a set, but you might find yourself doing so here. (Boat tiles on the base do make it easy to rotate if you’re space-conscious, but, you know, you probably shouldn’t be buying this if that’s the case.)

The difficulty involved in assembling 75309 Republic Gunship is really just reflective of the achievement in engineering that it represents, though – there’s comparatively so little Technic across its 3,292 pieces, with most of its weight supported by just a handful of beams and axles. It’s a refreshing approach for a UCS set, so perhaps fitting that it’s been applied to the first prequel trilogy vehicle in this subtheme since 2010’s 10215 Obi-Wan’s Jedi Starfighter.

But a UCS model can’t rely entirely on size and structural integrity to impress: it also needs to convey the shape and detail of its source material, and it’s difficult to find points where 75309 Republic Gunship doesn’t do that (while also bearing in mind that LEGO is an artistic medium, and this is therefore an interpretation of its subject matter, rather than a literal scale model).

On the contrary, it’s littered with intelligent and innovative techniques that add depth to not only the build experience, but the finished model, too. Stepped curved elements convey the incremental slope seen on the nose of the real deal (or fictional deal, maybe); the ammunition belts in the top of the ship rotate in tandem; and the gunner seats in the extending bubble turrets may just surprise you in how they first come together, and are subsequently rotated into position.

Speaking of those bubble turrets: they represent perhaps the biggest design choice in 75309 Republic Gunship, which is to say that it’s based on the in-universe version of the ship with partially-closing bay doors. The forward doors are replaced by the swinging turrets, as per 7163 Republic Gunship and 75021 Republic Gunship – and in direct contrast to 2008’s 7676 Republic Attack Gunship, the only one based on The Clone Wars TV series.

It’s a smart decision, because while the fully-closing doors are undoubtedly more satisfying to look at, the bubble turrets (which are printed, by the way – just like all the windscreen elements here) make for a more interesting and varied build experience. The only downside is that it exposes the bare anti-studs on the inside of the ship’s tail ramp, which are a real sore spot when viewed from certain angles.

That tail ramp is also really the only place where gravity hasn’t quite been conquered: it clips in place fine enough, but either because the quality of those clips in our review copy were worse than usual, or the assembly of plates is too heavy, our ramp has proved prone to falling down repeatedly.

A final tiny point of contention lies in the missile chutes that sit atop the Gunship. They’re the last part of the ship to come together, and for the most part, they’re a reasonable facsimile of what they’re supposed to represent – at least within the existing part palette. They’re a little too angular, and the transition towards the black pieces at the end is a little too severe, but we can’t think of a better way to achieve their conical shape at this scale.

More frustrating are the stickers required across them, which are a real pain to align; and the force required to connect them to the rear hull, which is facilitated by three Technic pins on each side. Snapping them in place without breaking either the chutes or the ship gives you a real sense of achievement, but only because it’ll take you a few tries.

Those really are very minor gripes, though, in what’s otherwise a very satisfying, authentic and accurate rendition of the Republic Gunship in LEGO bricks – without a single new moulded element required.

For the fans who have relentlessly requested Phase 2 Commander Cody and/or Jedi Bob for the past 17 months, seeing Mace Windu and a Clone Trooper Commander sitting on 75309 Republic Gunship’s stand will probably be pretty disappointing.

But it shouldn’t be: this isn’t a set you’re buying for the minifigures, and locking incredibly popular characters behind a £329 set designed for display would have been the wrong move. Instead, the Star Wars design team has very smartly included two minifigures most of us can live without (if the Gunship isn’t otherwise high on your wish list), but are still a great bonus in their own right.

That said, Jedi Bob would have been a perfect meta addition to 75309 Republic Gunship precisely because nobody’s buying it exclusively for the minifigures, and a hint of hardcore fan service therefore isn’t going to put off casual buyers who would have preferred a named Jedi. C’est la vie.

That’s hopefully enough to show that the old metric of price-per-piece doesn’t really matter much anymore: the Star Destroyer includes enough huge elements that its price has been bumped up significantly in comparison to the A-wing, or even previous UCS sets. So while 75309 Republic Gunship feels pretty reasonable on paper at 3,292 pieces for £329.99 / $349.99 / €349.99, that’s not the whole story.

The question is: does it feel like good value when all’s said and done? The more relevant stat to consider when asking that question is the set’s wingspan, which measures a whopping 74cm. It’s a great marker for just how much space you’ll need to accommodate 75309 Republic Gunship, and therefore more indicative of how far your money has gone by the time you place those minifigures on the stand (the final touch in the instruction manual).

You won’t quite realise it as the nose and fuselage come together, but when the first one of those wings is clipped into place, any qualms over the value of 75309 Republic Gunship will instantly melt away. Any prequel trilogy fans who’ve been relishing a UCS fix in the face of constant original trilogy vehicles won’t regret coughing up full price for this one.

It’s for all those reasons that 75309 Republic Gunship stands so distinctly in the current portfolio from a galaxy far, far away, and why – even with a couple of minor visual gripes, and the absence of Jedi Bob – fans of prequel trilogy vehicles (and we are out there – at least 30,000 of us!) should be more than satisfied with what’s arguably one of the most anticipated LEGO Star Wars sets of all time.

How long does it take to build LEGO Star Wars 75309 Republic Gunship?

You’ll spend roughly the entirety of Season 6 of Brooklyn Nine-Nine, or roughly six and a half to seven hours, putting together 75309 Republic Gunship.

How many pieces are in LEGO Star Wars 75309 Republic Gunship?

How much does LEGO Star Wars 75309 Republic Gunship cost?