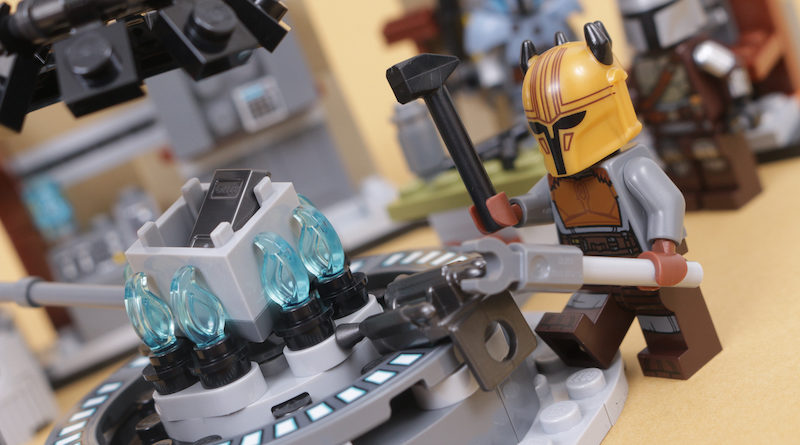 On more than one occasion during the first season of The Mandalorian, the Armorer’s forge proved to be a central location to the development of both character and plot. It’s the location where Din Djarin’s payment of Imperial-marked beskar is melted down and his new armour is forged. It’s also where he seeks council with the Armorer herself on what to do and where to go in the moments he is otherwise lost, and it’s a location tied to some strong imagery and a memorable action scene during the first season’s climax.

In short, it’s a place forged into the minds of anyone who has watched The Mandalorian (which is probably most of us, according to Disney+ statistics), packed with story, action and character – and so, a perfect location to be put into a LEGO set. Does 75319 The Armorer’s Mandalorian Forge deliver the goods, then?

Yes, quite simply. It may be a quick build to put together for more experienced LEGO fans, and for others the initial focus may purely be on the three minifigures included (two in particular), but it’s a model that is full of detail and charm.

That begins with the central section to the set, the forge itself, complete with the blue flame furnace. The somewhat complex shape of the station has been skilfully captured in LEGO form and somewhat surprisingly with not many bricks at all, while (if you can survive applying them) those four curved stickers add a nice visual element to the overall effect. Something to not overlook with the design here is how it is built at minifigure height – the Armorer can actually stand next to it and look reasonably in proportion to how she does in the show. It’s a small thing, but one that not every LEGO set gets right.

There’s little that 75319 The Armorer’s Mandalorian Forge doesn’t get right, to be honest. The forge extends out to include the table set-up where Mando and the Armorer sit and talk, and that in turn is connected to the two parts of wall included within the model.

With a bigger budget, of course we could have built a more complete room, but for just two walls included, a sense of shape, structure and flavour to the location is captured very well, thanks to the muted colour scheme and some choice parts usage. In the show, the forge is a dark, dingy but active area of Mandalorian work, and that’s exactly how the LEGO set feels.

There are also so many details dotted around the two walls that at once keep the build from getting boring and add far more playability to the set overall than otherwise expected. These include some stickered panels, a plain metallic dark grey Mandalorian helmet (perhaps a call-back to the first version of the Mandalorian we had in minifigure form), the Mandalorian insignia above the doorway, and the hologram brick of a chunky-looking Mandalorian.

The three minifigures included are certainly central to 75319 The Armorer’s Mandalorian Forge’s overall appeal, primarily for the exclusive duo of the Armorer and Paz Vizsla. Both are designed with such credible detail that they just ooze that indescribable mix of authenticity and appeal that makes them so immediately collectible for any Star Wars fan.

In the box art, the print on the Armorer’s helmet does admittedly look a little off, and, whilst it looks a whole lot better in real life, there remains a slight issue to be had in the use of the same helmet mould that has been used for Gar Saxon in 75316 Mandalorian Starfighter (a set we also happen to love and have reviewed here).

For the Armorer, the horns sit too large and slightly out of place. It’s an issue that could have been offset with a slightly higher and larger print of the visor of the helmet, for proportionality and overall placement, even if that would have then taken away from the accuracy of said print. Using the same moulded helmet as for Gar Saxon is where the issue is, and it can be quite easily overlooked on an otherwise exceptionally-designed LEGO Star Wars minifigure (like pretty much all of them at the moment…).

Paz Vizsla is the third minifigure in this summer 2021 wave of LEGO Star Wars sets to use the shoulder pad piece to bulk up his appearance. Coming in sand blue with some excellent printing, it’s quite remarkable how effectively the piece works in adding real size and weight to any minifigure’s appearance, and it works perfectly to capture the bulkier frame of the character as per his appearance in the show. His giant backpack and blaster are also finely – and quite simply – captured too.

Meanwhile, there’s also the small matter of the Mandalorian himself, aka Din Djarin. We are verging into Jack Sparrow territory here, with the one design of the character now appearing in multiple LEGO sets. This time at least he comes with a dark metallic grey jetpack, to help differentiate him from his brothers.

Much like the first version of his minifigure coming with his helmet in that same colour, you can’t help but wonder why the jetpack doesn’t come in light metallic grey, to better match his Beskar armour. The answer will be budget-related, but it does feel like one area where 75319 The Armorer’s Mandalorian Forge makes a trade-off.

How’s the quality of his helmet printing this time? He’s still looking a little short, to be honest. The print needs to be raised ever so slightly so that his eyeline is at a more credible level. When it is lower, even by the tiniest amount, it has the effect of making Mando look short.

As a trio of characters, they are all directly tied to the location of the forge, given one moment when the Armorer intervenes when there was otherwise rising tension between Mando and Paz, reminding them both of ‘the Way’. And they also serve as nice additions to the collection of Mandalorian Tribe members that started with last year’s 75267 Mandalorian Battle Pack.

There’s little to question the logic or fairness behind pricing 75319 The Armorer’s Mandalorian Forge at £27.99 / $29.99 / €29.99. It delivers a decent piece count, three minifigures (two of which are exclusive) and a collection of neat details and extras dotted throughout what is a credible LEGO representation of a recognisable and key location from The Mandalorian.

75319 The Armorer’s Mandalorian Forge isn’t the most perfect LEGO Star Wars set releasing as part of the summer 2021 collection, but it does have a lot more going for it than a set of this size and price really should. In fact, there’s little to find fault in.

Three desirable minifigures – including two very exclusive and brilliantly-designed ones – would ordinarily be the only reason to pick up a set like this. Instead, they serve merely as the icing on the cake, with 75319 The Armorer’s Mandalorian Forge packed with all the play, detail and authenticity any fan of The Mandalorian would hope for.

How long does it take to build LEGO Star Wars 75319 The Armorer’s Mandalorian Forge?

75319 The Armorer’s Mandalorian Forge is a relatively small LEGO Star Wars set and takes less than half-an-hour to put together.

How many pieces are in LEGO Star Wars 75319 The Armorer’s Mandalorian Forge?

There are 258 pieces in 75319 The Armorer’s Mandalorian Forge, including three minifigures for The Armorer, Paz Vizsla and the Mandalorian.

How big is LEGO Star Wars 75319 The Armorer’s Mandalorian Forge?

75319 The Armorer’s Mandalorian Forge measures 18cm long and also 18cm wide, while at its tallest point – which is the furnace itself – it comes in at 9.5cm high.

How much does LEGO Star Wars 75319 The Armorer’s Mandalorian Forge cost?