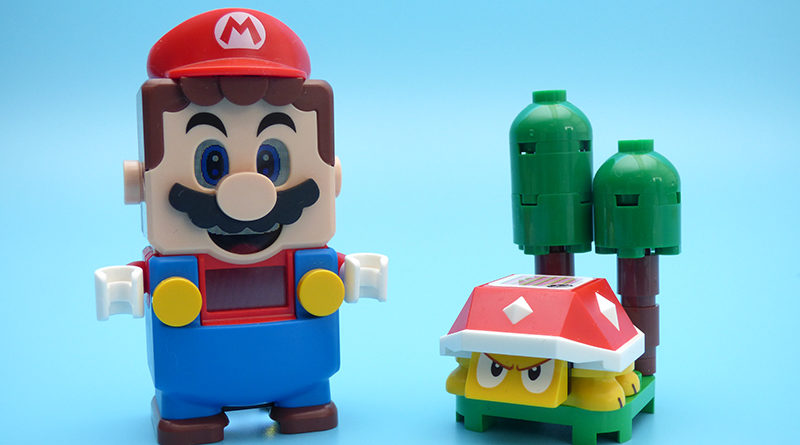 As part of the LEGO Super Mario theme, there is a new series of blind bags that will launch alongside the rest of the sets on August 1. Each blind bag includes a buildable bad guy with a scannable code, so that builders can add more villains to their layouts for Mario to conquer. There are 10 different enemies to collect – Paragoomba, Fuzzy, Spiny, Buzzy Beetle, Bullet Bill, Bob-omb, Eep Cheep, Blooper, Urchin or Peepa.

LEGO Super Mario products only work with 71360 Adventures with Mario Starter Course – although these bad guys can be collected separately, the reactive Mario figure will respond when bounced on their scannable codes.

A nice touch in 71361 Character Packs is that the various characters are exclusive editions – The Goomba, for example, has a different expression to the one included in the Expansion Sets.

This review copy contained Spiny and the essence of the character is captured perfectly. It’s all in those angry eyes! The construction is ingeniously simple, using two of the new feet pieces to give him four legs and the new moulded armour piece in red. Both the feet and armour feature on a lot of the bad guys throughout the theme.

As with the Power-Up Packs, a platform is also included, which is handy for those looking to make huge levels and wanting every piece they can get.

For those who take a deep dive into this theme, collecting the blind bags will be a no brainer. Mario fans will also be keen to take this opportunity to pick up some cute LEGO representations of their favourite characters. If Spiny’s anything to go by, these will capture the classic Super Mario enemies in a uniquely LEGO way.

71361 Character Pack will be available from August 1 at LEGO.com. You can help support Brick Fanatics’ work by using our affiliate links.