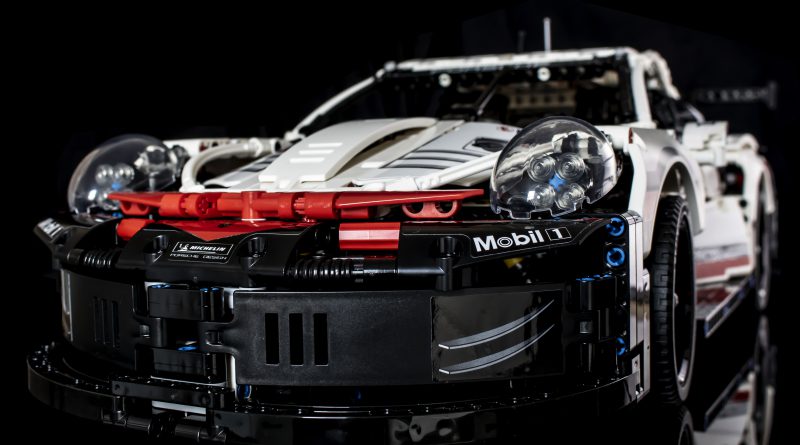 Following in the footsteps of 2016’s 42056 Porsche 911 GT3 RS, 42096 Porsche 911 RSR is the latest Technic Porsche 911 available to fans. It is smaller than the previous model, with only 1,580 pieces compared to 2,704 but comes in a more authentic racing colour scheme of white, red and black complete with racing decals. Play features include a working six cylinder engine,  suspension, steering and authentic interior details including a map of the laguna racing circuit inside the driver’s door. 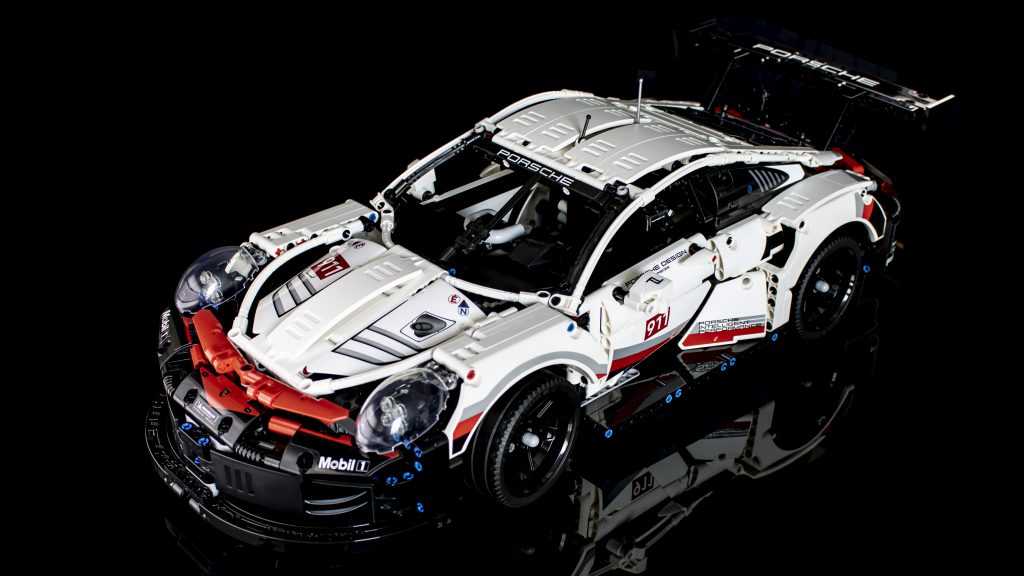 Having started this review series as a LEGO Technic virgin, I have worked my way through eight of the nine sets in this current wave. With my skills honed I now feel I’m ready to tackle what surely is the showcase set of this year’s Technic sets – but have I saved the best until last?

The box is huge, suggesting this is going to be a pretty complex and engrossing process. The box art shows the supercar racing around a circuit, presumably Laguna. On the reverse there is a photo of the Technic Porsche alongside it’s real life counterpart along with some stats about top speed, horse power and engine size.

Inside the box is a whopping 13 bags, all unnumbered of course, a very sizeable instruction manual, fifty two stickers spread over two sheets and four sizeable tyres, which help give some indication of the overall finished size of the model. As an interesting aside, it is worth reminding readers that the LEGO Group is the largest tyre manufacturer in the world.

Even without methodically separating everything, sorting out the pieces that will build 42096 Porsche 911 RSR took time and this is a set that requires a lot of space. It either needs to be tackled in one sitting or have a designated area to leave everything mid-build. This is definitely not a set for a very casual or easily deterred LEGO fan.

As with most LEGO Technic sets, the build begins with construction of the chassis, steering mechanisms and six cylinder engine. Some nice techniques and interesting parts make this section an enjoyable experience. I particularly like the four light bluish grey steering joints, as I can see a use for these in a few upcoming micro builds I have planned.

During the early stages of building 42096 Porsche 911 RSR there are some fairly complex sub assemblies that go together to form a pretty sizeable frame, certainly much, much bigger than any of the other eight sets in this wave. The assembling of the replica six cylinder engine and steering mechanics are pitched at just the right level of complication. Younger builders will find it a challenge while still being enjoyable and it helps serve a good introduction to the world of automotive engineering.

With the large frame completed, it is onto the body work and this is where the build really starts to shine. Some cleverly angled connections help create the sleek curves of the supercar. The body work is made from a mix of panels and wheel arches with stickers used to add detail. The wheel arches are actually printed, and despite the amount of stickers used throughout, those included help add more layers of authentic detail to the model.

The doors on 42096 Porsche 911 RSR are smartly designed, as is the front wing – both are very satisfying to put together. The skirting around the front really helps give the model shape and it is at this stage that it starts to take on the recognisable form of a Porsche.

The dashboard and interior utilise some great parts, and clever angles are created using and a mix of Technic and regular system bricks. The front panel, roof and boot are equally enjoyable to construct although the rear assemblies require some incredibly precise and fiddly stickers to be placed on.

Each sub assembly is a pleasure to construct despite the fact that on more than occasion there are some really fiddly connections that require a little patience and a lot of dexterity. Although the finished model has lots of symmetry, nothing ever feels repetitive due to the way the designers have planned each step. This is by no means a quick build and there is a real sense of achievement once it is completed.

42096 Porsche 911 RSR is not a set sold on its play features. While they all work perfectly fine and include opening doors, front steering, suspension and replica six cylinder engine, it is how this set looks on display that is the main selling point. Be prepared to make some room on the shelf though, the finished model is very big at nearly half a metre long. It looks absolutely incredible from every angle though, with a stunning amount of detail everywhere you look.

The colour scheme, coupled with the stickers, creates a realistic looking racing Porsche and the designers have done an incredible job of capturing the unmistakable look of a Porsche 911. I particularly love the look of the headlights at the front and I discovered that small LED lights – the kind usually used for small wedding decorations – fit perfectly inside the bubble canopy, adding even more realism to the model.

It is a little strange for the LEGO Group to have released another 911 set so soon after 42056 Porsche 911 GT3 RS, but I actually think this is a marked improvement thanks to some new additions, notably the updated colour scheme, headlights, windscreen and interiors.

This is definetely not a set for first time Technic builders, a set this size could easily feel daunting due to the piece count, sizeable manual and building techniques. If you are a Technic fan and enjoy fairly complex builds, that lead to an incredible looking final model, then this is a highly recommended set.

Having finished building all nine Technic sets from the 2019 launch wave, 42096 Porsche 911 RSR is this my personal favourite of this current wave? Probably not. It’s certainly a beautiful looking thing, oozing with style, and the build is incredibly deep but there are more fun sets out there and for me that should always be the at the forefront of LEGO.

42096 Porsche 911 RSR is available now at shop.lego.com. You can help support Brick Fanatics’ work by using our affiliate links.