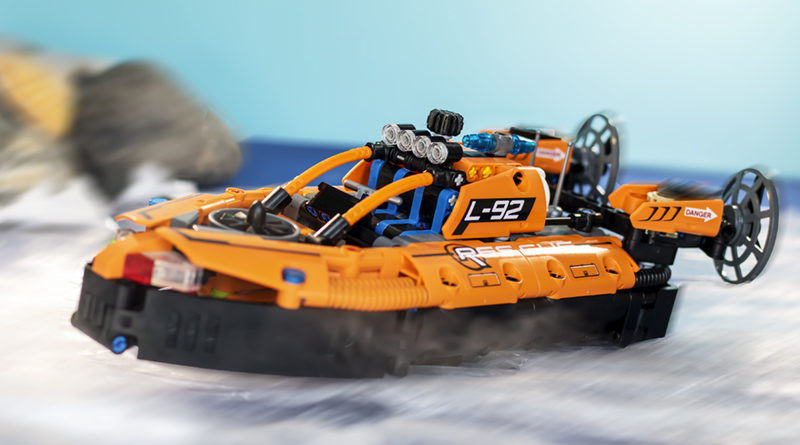 Hovercrafts have been a staple of the Technic theme for nearly three decades, so 42120 Rescue Hovercraft has a lot to live up to. But can it honour that LEGO legacy with fewer than half the parts of its immediate predecessor?

There are no two ways about it: hovercrafts are awesome, plain and simple. They float on water, they drive across land, they can hover over mud, ice or pretty much any other surface they want. The LEGO Group clearly agrees, as there’s a long history of Technic hovercrafts dating back to the first, 8824 Hovercraft, in 1993.

The most recent release, 42076 Hovercraft, weighed in at twice the price and more than twice the parts of this latest entry, but also had a more industrial feel, whereas 42120 Rescue Hovercraft looks sleek, fast and vibrant, just like the real thing. Will that make it good enough to sail away with your money, or will it sink without a trace?

42120 Rescue Hovercraft comes in a fairly large box, but contains surprisingly few bags. Three mid-sized bags and a small sticker sheet are all that’s needed to build the rather striking orange and black hovercraft.

The first task is to assemble the inner gear system that makes up the model’s main function, the rotating fans at the rear of the craft. It’s a fairly straightforward mechanism, constructed from two 12-tooth bevel gears on either side and a central 12-tooth gear. This is then connected to two wheels, which are disguised in the middle of the hull, using a long Technic axle. When pushed along the ground the wheels turn, rotating the rear fans in conjunction with one another. It’s a simple gear system but looks excellent once completed, and gives the model some great functionality.

Adding to the play features are two smaller wheels attached further along the framework. Unusually for a Technic model of this size there’s actually a lot of movement to these bottom wheels, allowing the craft to be steered both to the right and left. It’s a nice touch and also a very satisfying component to piece together.

With the inner framework finished it’s on to the job of building the lower bodywork. It’s predominantly built using curved black 3×7 panels around the sides and stern, which do an excellent job of recreating the hull thanks to their curved shape. The front bow is a separate sub-assembly using larger 3×13 panels. It’s a little fiddly to connect to the main body, but once it’s on the full size of the hovercraft takes shape. It’s smaller than expected, especially when looking at the box art and the size of the box. However, once fully constructed the final model feels sturdy and solid and the size doesn’t really matter.

With the lower hull complete, the last stage to assemble is the upper bodywork, with a number of sub-assemblies again required to complete the shell. The use of Technic panels and hose pipe pieces gives the craft an authentic look. These elements are a striking orange, which is not only accurate for a sea rescue vehicle, but complements the black underneath really well. Further detail is added through the use of stickers. Unusually for a Technic set there aren’t that many stickers to apply. The craft’s number, a control unit and ‘rescue’ decals are all that’s needed to decorate the final model. The stickers add a lot to the final look, but they do require a little concentration to line up properly.

The final level of detail comes from a number of regular System pieces, and demonstrates some neat parts usage. Fencing swords are used for antennae, trans-green and trans-red 1×1 slopes are used for lights and 1×2 trans-blue cones represent the onboard siren.

Despite its size, 42120 Rescue Hovercraft is a very compact and sleek vessel. The hull sits slightly off the ground, giving it the appearance that it’s really hovering. There are also a decent amount of functions built in, which really elevates the model to something better than expected, with full left and right steering, rotating rotor blades and – as a nice touch – a rotating siren connected to the rear fans.

It’s a satisfying model to build and really fun to play with.

The last Technic set to have been released with a figure was in the year 2000, so unless you haven’t bought a Technic set in over 20 years it’ll come as no surprise that this section of the review won’t have much content.

42120 Rescue Hovercraft retails for £29.99 in the UK. It’s a fair price but feels ever so slightly high, and we’re talking mere pounds here. If the set was around the £25 to £27 mark it would be amazing value for money. Having said that, when you take into account that the same parts can also be used to build a twin-engine airplane as the set’s B-model, this suddenly becomes a lot more attractive even at full price. For our friends across the pond, the retail price of $29.99 is absolutely faultless.

42120 Rescue Hovercraft is a really, really solid set. The finished model is one of the most complete Technic sets to have been released in a long time – there are no gaps or framework exposed; it feels solid and colourful; the functions look excellent when in motion; and the build is very satisfying without being overly complicated (this is aimed at 8+, after all). If it was just that little bit cheaper it would be perfect, but as it stands it’s still brilliant. And remember, hovercrafts are awesome, so you really can’t go wrong with this one.