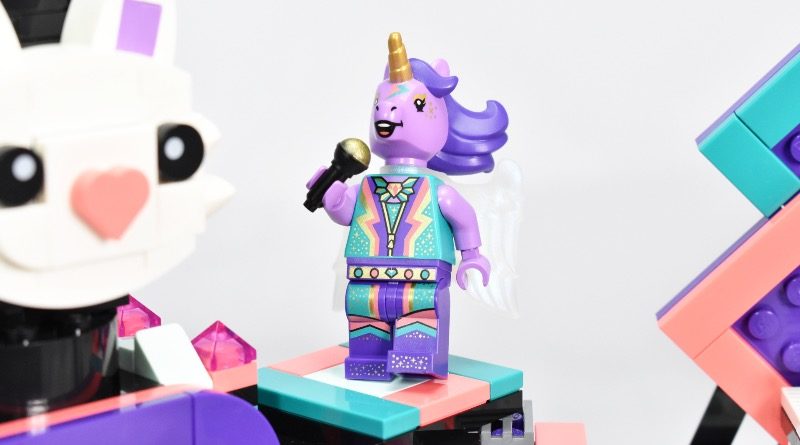 43113 K-Pawp Concert sets the stage for a physical LEGO VIDIYO experience, offering the opportunity to get musical with its minifigures without the accompanying app.

VIDIYO’s first wave of sets lacked much in the way of a traditional building experience, instead relying on their minifigures to interact with an augmented-reality app to combine digital and physical play. The second wave now pulls some of that digital world into reality with physical builds – including 43113 K-Pawp Concert’s vibrantly-coloured stage setup. But is this a gig worth attending?

The building process won’t pose any kind of challenge to experienced fans, taking around 30 minutes to complete in total across four numbered bags. As the build is almost symmetrical, there’s a hefty amount of repetition, but you’ll still find moments to enjoy – particularly with the giant, brick-built unicorn and cat heads.

Following suit with other second-wave VIDIYO sets, these heads are able to turn on a rotating 4×4-stud base, offering multiple display options. The cat head is less impressive than the unicorn head in pure build terms, but actually looks better from the front of the stage, as the white assembly offers contrast to the set’s otherwise vivid neon colour scheme.

In fact, where its colours are concerned, 43113 K-Pawp Concert arguably makes 43115 The Boombox (review) seem tame by comparison. It’s a lot to process, but if you’re a fan of the LEGO Group’s neon hues – and their liberal application across this second wave of VIDIYO sets – you’ll be very happy with what 43113 K-Pawp Concert brings to the table.

More than just its bright colours, though, this is as close to a realistic and traditional manifestation of the theme’s ‘stage’ aspect – which was previously locked away behind the accompanying augmented-reality app – as you’ll find. There’s plenty of space to pose the three included minifigures, and the angles incorporated into the build add depth and dynamism to the display.

Hidden away behind the impressive number of platforms is a very welcome sight: a place to store three of the extra BeatBits included in the set. Another 12 of the remaining 14 printed 2×2 tiles can be placed on the scanning base that’s bundled in with every VIDIYO set as a means to interact with the app, although given the minifigures can be scanned in without it, it does feel a little superfluous.

The selection of three minifigures across 43113 K-Pawp Concert are a solid extension of the build, adopting a similarly flashy appearance and embracing a similarly distinct colour scheme. They’re arguably also the highlight of the set – a running theme across VIDIYO – each containing unique, stand-out features.

Bunny’s printed guitar, Flying Unicorn’s wings and headpiece and Kitten’s unique moulded head-and-hairpiece are all brilliant additions to any minifigure arsenal, while all three characters maintain the aesthetic established across the wider range of VIDIYO sets to ensure some cohesion for those picking up the entire wave.

That’s partly due to the fact that so many of its 514 elements are tiny tiles and plates, but also because the build doesn’t feel particularly involved. The end result, however, does go some way to redeeming the set’s value, offering a distinctly physical space in which to play with and display the included minifigures – regardless of whether you connect to the corresponding app.

43113 K-Pawp Concert finally realises the core experience of any music-driven theme in bricks, offering up a physical concert stage for your growing VIDIYO minifigure collection. It’s not perfect – the symmetrical build isn’t hugely entertaining, and the vivid colour scheme will likely prove polarising – but it’s another sure step forward for a much-maligned theme that’s really only just beginning to find its feet.

Please support Brick Fanatics by purchasing your LEGO products through our affiliate links.

How long does it take to build LEGO VIDIYO 43113 K-Pawp Concert?

43113 K-Pawp Concert takes around 40 minutes to build, offering a sandbox of neon parts to play with along the way.

How many pieces are in LEGO VIDIYO 43113 K-Pawp Concert?

43113 K-Pawp Concert consists of 514 pieces, coming in as one of the mid-ranged sets from the second wave of VIDIYO releases.

How much does LEGO VIDIYO 43113 K-Pawp Concert cost?

43113 K-Pawp Concert retails for £44.99 in the UK, $49.99 in the US, and from €49.99 in Europe. It’s a relatively fair price for the final product, but given precedent set by previous VIDIYO products, you can probably safely wait out a discount.