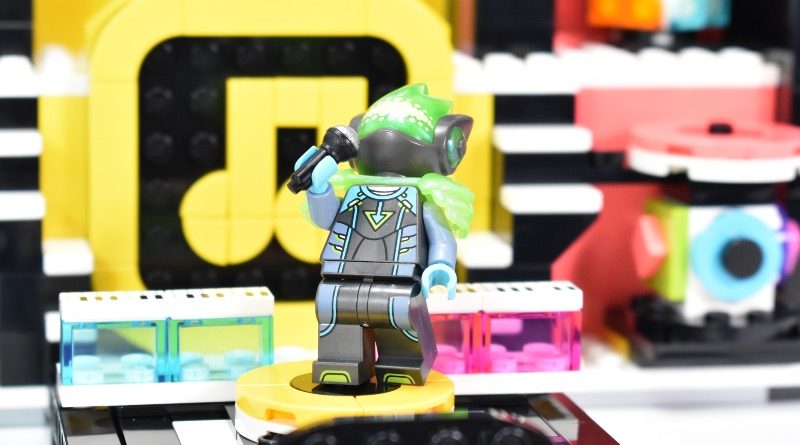 LEGO VIDIYO kicks things up a notch with 43115 The Boombox – but can it offer a course correction for this much-maligned musical theme?

LEGO VIDIYO’s 43115 The Boombox is currently the largest set in the augmented-reality theme, containing a total of 996 pieces. Compared to other LEGO themes, that doesn’t seem all too impressive – but it does represent a step in the right direction following the first wave of LEGO VIDIYO sets, which consisted entirely of BeatBoxes and Bandmates.

This new music video theme launched back in March to a mixed critical reception, but this second round of sets – headlined by 43115 The Boombox – may go some way to repairing the damage done by the initial threadbare wave.

As previously mentioned, this is the largest set from the LEGO VIDIYO theme, but it doesn’t boast an overly impressive piece count. Admittedly, a fair amount of larger pieces are used – which explains the slightly-larger-than-expected build – but that doesn’t mean a lot of smaller pieces are included as well.

There are a couple different ways to display this build, either as a stage, or a simple (whilst still vibrant) classic boombox speaker. These two options are highly appreciated for a couple of reasons – for one, who doesn’t like choices when it comes to displaying your LEGO sets? Second, it allows for more compact storage, while also keeping all the removable details of the stage – such as the multiple small speaker builds – in a secure and sealed place.

The building process is simple and doesn’t contain any hugely interesting techniques, but it’s still pretty compelling and rewarding to put together, by virtue of being spread across seven numbered bags. There are multiple, smaller builds that are added on to the main boombox speaker, such as a sofa and a bunch of speakers and lights.

This did end up getting a little repetitive and fiddly at times, due to there being multiple identical speakers covered in small 1×1 pieces. However, it’s well worth pushing through the slightly repetitive nature as the reward is an eye-catching and interesting build.

We were also pleasantly surprised by the fact that there were no stickers included, as you might expect from a set of this size. There aren’t many printed pieces included, either (at least beyond the BeatBits), but they don’t feel missed, as 43115 The Boombox has otherwise taken the approach of simply mixing in as many colours as possible.

While it’s light on complex techniques, there are still some amazing details and clever use of pieces dotted throughout this build. For instance, the bright yellow music note slapped in the centre makes effective use of tiles to create almost perfect proportions.

It’s not all good news: the stripped-down version of one of the BeatBoxes feels pretty superfluous in the context of the rest of the set, while the extraordinary use of colour can be a little overbearing for older builders. VIDIYO is targeted at kids first and foremost, however – so even though its sets are getting bigger, they still aren’t designed to be amazing display pieces that adults can proudly place on a shelf.

When testing the build in the LEGO VIDIYO app, we were left slightly disappointed. The app itself largely hasn’t changed since its launch and many of the initial complaints are still valid, such as not being able to customise your band’s name, limited sharing functions and so on.

If anything, it was actually worse for 43115 The Boombox: even though the purpose of this set is to give you a ‘stage’ for your music videos, it was almost impossible to place the minifigures on the actual build as the app seemed to have a hard time establishing its LEGO surfaces. Whether that will change when this set launches proper on June 1 remains to be seen.

You’ll find four minifigures in the box, including an Alien, Leopard, Vampire and Fairy. Those basic names bely their intricate designs, though, as all the minifigures each have their own stand-out feature: the Fairy has a suitably printed wing piece; the Vampire has an impressive torso and leg printing; the Leopard has a new headpiece; and the Alien also has a printed and moulded headpiece.

The Alien minifigure will, without a doubt, be among the most beloved LEGO VIDIYO characters to date. It comes with a spiky, bright green headpiece, green shoulder pads and nicely-printed torso and leg pieces, including one of the most seamless printing transitions across any LEGO minifigure in recent memory.

43115 The Boombox is the largest of all the LEGO VIDIYO sets to date, and is priced at £89.99 / $99.99 / €99.99 for 996 pieces and four exclusive and high-quality minifigures. Despite the apparent value from a price-per-piece perspective, however, the build is a little lacklustre – and combined with the still-janky app experience, you might be better off waiting for a discount on this one.

Has 43115 The Boombox magically fixed all the complaints people have with the VIDIYO theme? In a word: no. Many of those criticisms focus on the app rather than the sets, so a single model would have a tough time addressing them – but for the leap forward this set represents next to the initial wave of BeatBoxes in both size and build, it’s a much better sign of what LEGO VIDIYO is capable of.

How long does it take to build LEGO VIDIYO 43115 Boombox?

It takes around two hours to build 43115 Boombox. Seven numbered bags are included, and each bag can take anywhere from 10 to 20 minutes to complete.

How many pieces are in LEGO VIDIYO 43115 Boombox?

43115 Boombox measures 16cm tall, 23cm long and around 8cm wide when in the compact display state.

How much does LEGO VIDIYO 43115 Boombox cost?