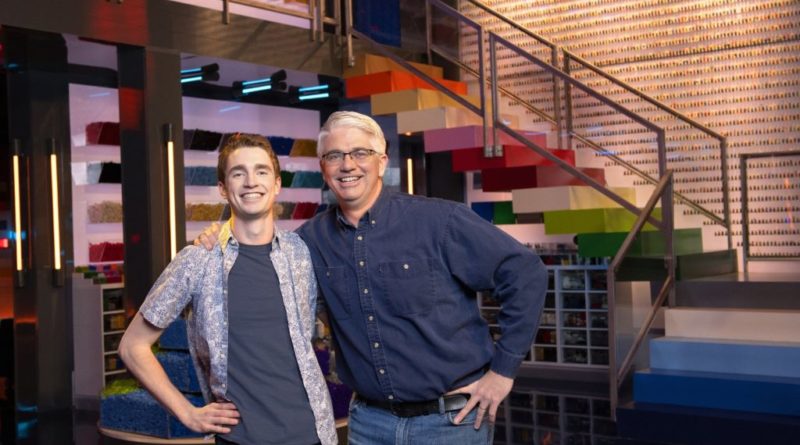 Meet father-son-partnership Tim and Zach ahead of their time as LEGO MASTERS USA contestants during the show’s second season.

This year, 24 contestants in 12 pairs will compete in LEGO building challenges for the chance of winning a $100,000 cash prize, the ultimate LEGO trophy, and the grand title of LEGO MASTERS. The first episode airs on Tuesday June 1 at 8:00pm ET / 9:00pm PT on FOX.

Before the second season kicks off, we had the chance to catch up with all 24 contestants. Let’s hear from Tim and Zach.

What were the roles like between you on the show, as father and son?

Tim: There are different seasons in our lives. When he’s a child, you do have that father role, but now that he’s 18, he’s matured out of that role. There’s a little bit of experience, so I can use that experience when I’m teaching, but there’s a lot more respect going on. It’s really more based on our areas of expertise.

Tim: It was surreal for me. Obviously, it’s overwhelming. All the way through, before you get there, you pinch yourself, and then you get in there, it’s the lights, the cameras, the action. We’re in the deep end. But for me, more important than ever, it was the fact that I got to spend it with Zach. As we go through our seasons in life, he’s a senior, he’s graduating, he’s 18. It was truly an honour to spend multiple weeks with him in all of the aspects of what we were doing.

Zach: I was super excited. We started meeting all the other contestants. Everybody was awesome and we were hyping each other up. We had such a good time.

Tim: He’s usually an introvert, so it was kind of surprising.

How was it different from building at home?

Zach: It’s very different because they throw you into a room where you don’t know where everything’s at. They just hand you a book of all the parts that are here.

Tim: It’s overwhelming. You’re talking 5 million bricks. There’s so much. We’ve worked with our own processes of sorting and it’s just different.

Do you have a go-to technique when building?

Zach: I put cheese slopes on everything. I don’t know why, I just do it. I don’t think I’ve built any build in a long time that didn’t include a good amount of cheese slopes. I just like how they look. It rounds it off nicely.

Tim: It’s almost like a finishing touch. It makes it look solid and sleek. It’s probably our signature.

What was the set that got you hooked on LEGO?

Zach: One of the Endor ones, maybe from 2008. The one that folds into three parts and it had the two-toned Ewoks [8038 The Battle of Endor]. I remember saving up all my money and it took me weeks to save up enough money, and then it was the first big set that I bought.

Tim: My hook wasn’t necessarily a set, which is interesting. The first thing that got me into it was buying 100 pounds of bulk LEGO. Then all of a sudden, we have all this bulk LEGO and we could do whatever we want with it.

What would you like the audience to take away from your time on the show?

Tim: This is really close to my heart, the question I’m really thankful you asked. It’s one of the passions I have. I love LEGO and the way it connects us, but the passion of my heart is to portray that parents can be involved in their children’s lives. You just have to take the time and be connected.

If you show up in your kids’ lives, you can have healthy relationships. You can have a really healthy, strong bond. My hope and my prayer is that people will see that, take it to heart, and be inspired to spend time with their kids, whether that’s connecting through LEGO or something else.