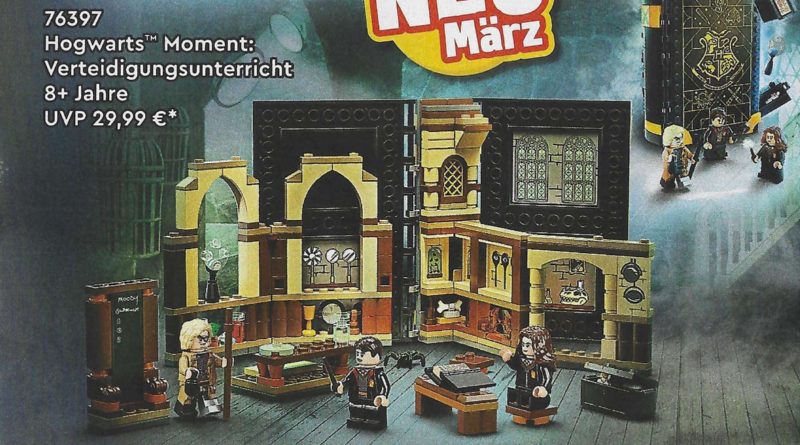 The Wizarding World classrooms first debuted earlier this year, with sets including 76382 Hogwarts Moment: Transfiguration Class and 76384 Hogwarts Moment: Herbology Class. Billed as ‘portable playsets’, each one contains several smaller builds – desks, benches, and so on – that can tuck away inside a closing book.

StoneWars has now retrieved scans of the official LEGO catalogue for the first half of 2022, revealing two new additions to the Hogwarts Moments range – and another expansion to the modular Hogwarts introduced this summer, through the likes of 76386 Hogwarts: Polyjuice Potion Mistake and 76389 Hogwarts Chamber of Secrets.

The two new classrooms are 76397 Hogwarts Moment: Defence Class and 76396 Hogwarts Moment: Divination Class. The former is built around a black book cover, and includes minifigures of Mad-Eye Moody, Hermione Granger and Neville Longbottom, while the latter is purple, and comes with Professor Trelawney, Harry Potter and Parvati Patil.

Both of these sets will retail for €29.99 in Europe, so expect a price tag of £27.99 in the UK and $29.99 in the US, matching this year’s Hogwarts Moments sets. Their set names may not be final for now, however, given they’ve just been loosely translated from the German LEGO catalogue.

Finally, the third set joining the already-revealed 76399 Hogwarts Magical Trunk in 2022 (so far!) is 76398 Hogwarts Hospital Wing, another boxy addition to the modular Hogwarts line launched to celebrate the theme’s 20th anniversary. The 510-piece set includes the main trio of Harry, Ron and Hermione, along with the first-ever minifigure of Madam Pomfrey. It’s due to retail for €49.99 in Germany.

All three of these sets are slated to launch in March alongside 76399 Hogwarts Magical Trunk. Keep an eye on Brick Fanatics for confirmation of their international pricing.