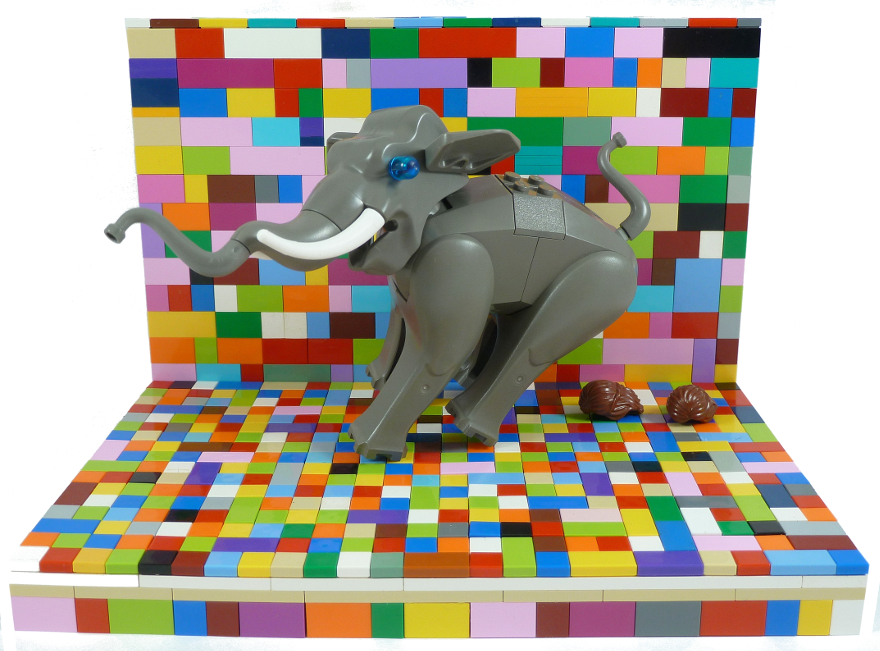 It’s Sunday once again so time for another of my MOC Corners. This week’s ramblings are about what I think is the best creature LEGO created: The Elephant. As you can see from the pictures below I’ve used it in quite a few of my MOCs, but strangely this beautiful creature only ever appeared in two sets, both from the 2003 Adventurers Orient Expedition range. Specifically ‘The Elephant Caravan’ (7414-7) and ‘The Scorpion Palace’ (7418-1). As it only made these two brief appearances it’s rather hard to find and is rather expensive if you do hunt one down (pardon the pun). It comprises of 17 parts and comes in both light and dark grey (Part elephant1c01 Dark Grey) (Part elephant1co2 Light Grey).

The first build George the older of my elephants appeared in was this rather funky number entitled” Colourful Number Two” I’d already done a colorful number one the week before I had been reading a lot of Elmer The Patchwork Elephant to my son at the time so I think it may have subconsciously twisted my mind, hence the poor photoshopping !

The next to follow was this and as you can see the Woodoo Ball “1001” I spoke about last week makes an appearance, it does gives him a certain angry look ! By the way this is Keith the other of my Elephants he’s a little less house trained than George so doesn’t appear in many of my builds. This one was entitled “Don’t Step On My Banana’s” Keith did have to have a little anger management training after this.

This one well I think it may have been created after Keith had gone off the rails So as you can see it affected both George and myself !

I’d built a Moc based on a 1900 Century Gentleman’s club and taken a few photo’s when I heard the saying “There’s An Elephant In The Room” quoted whilst listening to the radio so thought one would be a nice addition to the build so added the other angry Keith.

I then added George and some croissants which seemed to have a calming affect on Keith.

Lastly a Simpsons build When they were first reveled The Simpsons minifigures didn’t really appeal to me I vowed that I wasn’t going to buy any ………. Yes I got sucked in and bought the lot I think it’s going to be the same with the Disney Series as well, anyway I did buy them and used them for a few builds some based on the adventures of everyone’s favourite shopkeeper Mr Apu Nahasapeemapetilon.

Everyone need’s a Lego elephant in their life If not send it my way !