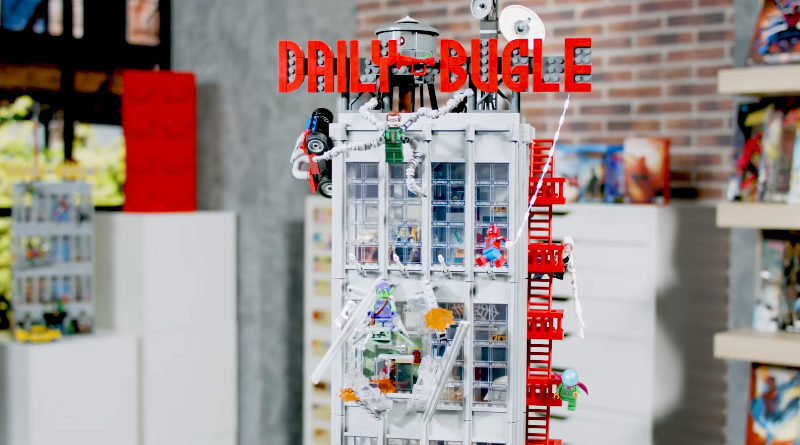 The LEGO Marvel 76178 Daily Bugle designer video not only includes designer insight, development details and more, but also an early design of the build with many notable changes.

Following on from the video’s release yesterday, an early concept model of the set has been spotted amongst the background details, but what exactly has changed in the design of 76178 Daily Bugle?

The most obvious difference is at the top of the build with a bright yellow sign instead of the red version that crowns the building now. However, the build for that section looks to be the same between them otherwise. This is something that LEGO designer Mark Stafford has commented on, meaning this build was likely the intended design up until the last second of development.

The taxi was still included at this early stage, because what would a New York skyscraper be without one? It also seems that the initial Daily Bugle took up the entire baseplate rather than leaving space for an alley on either side. It could be that the latter was decided to help isolate the model when placed beside other modular buildings.

The minifigure selection doesn’t appear to have changed but we at least know that at one point during development, a total of 60 were up for inclusion. The development model also appears to be shorter than the final build with a smaller ground floor, though perhaps the extra pieces taken from the side were used to expand the lobby’s height.

LEGO 76178 Daily Bugle is available now from the official online store as the biggest Marvel set to date and you can enter the latest LEGO Ideas contest to be in with a chance of winning it and other Spider-Man prizes.