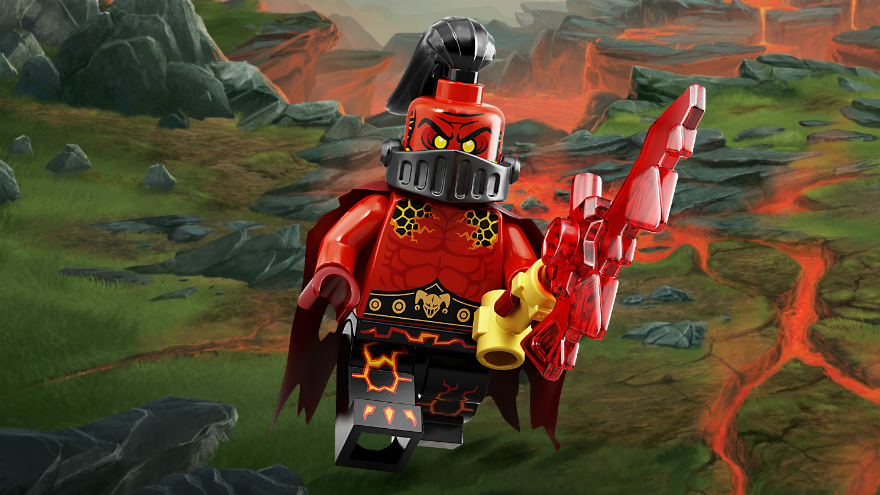 Are you loving the new Nexo Knights theme? It seems to be more popular then most of us AFOLS expected. LEGO are really throwing everything including the kitchen sink at the new theme. The minisite is a hub of info including the next wave of villians that will appear in wave 2 of the new theme. I’ve got to say the characters are very eye-catching and highly appealing. Heck they even based one on me which I’ve thrown in for fun hahahaha 😉 Here is a closer look at them:

The Flame Thrower is a feared lava soldier. His inside is one big inferno of fire that he can shoot out at the enemy at any time. If you don’t like heat and flames, stay away. The only way to defeat this fiery fellow is to douse him in water and he will go back to the Book of Monsters to be ignited again.

When you want to conquer the world with an army of monsters, you need a good general to command them. General Magmar is the greatest strategist, warrior and cook the Book of Monsters has ever produced. He talks in big words and fights the big fights. Too bad he rarely wins…

Whiparella is so scary she even frightens the Book of Monsters. She is shaped like a snake, has a whip that will call out your deepest fear and her Spidergloblins turn into that fear. Her only personal fear is being called ‘Whimparella’ – which, of course, one of the knights does constantly.

You don’t want to hug this monster. Flama is a molten mass of liquid lava and you would vaporize in just a moment. Usually seen in cohort with her rock brother Mouldron creating havoc somewhere. Together they are the Hot’n’Heavy twins that deliver a 2-for-1 offer on destruction.

Burnzie is a big, bad monster. He has yellow gleaming eyes, a mouthful of sharp teeth and spooky, downward pointing horns. If you point an ordinary sword at him, he will spurt magma fumes on it, to make it go red-hot in an instant. And he is pretty good at bowling.