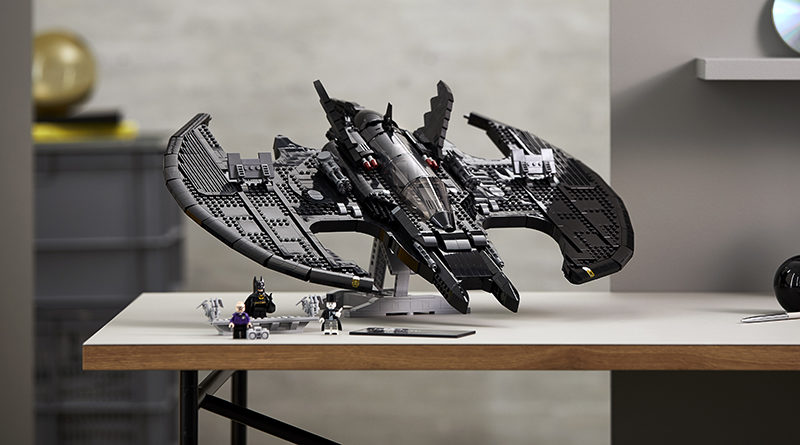 To celebrate the imminent launch of LEGO Batman 76161 1989 Batwing, Brick Fanatics traces the history of the LEGO Batwing.

76161 1989 Batwing may be the biggest LEGO Batwing yet, but it’s not the first. If you can believe it, that honour belongs to a model that’s now 14 years old. And since then, we’ve had no fewer than 16 different LEGO interpretations of the Caped Crusader’s plane.

The original Batwing arrived in 2006 in 7782 The Batwing: The Joker’s Aerial Assault. Its design was emblematic of the time, prioritising size over detail or rigidity, with huge wedge plates and slopes recreating that recognisable Bat-silhouette. A Technic cannon built into its rear provided some serious firepower, and for a first effort, this was pretty decent.

Surprisingly, that was the only proper Batwing to come out of the original Batman theme, which ended in 2008. Four years later, the Caped Crusader was back with a bang – and he had his fellow DC superheroes in tow.

Even with Superman, Wonder Woman et al on board, that inaugural DC Super Heroes wave focused predominantly on recreating the 2006 Batman line-up. That meant another pass at the Batwing in 6863 Batwing Battle Over Gotham City.

This smaller rendition pared back the craft’s size, but was sturdier for it. And it retained the all-important resemblance to the Bat-insignia, which most versions of the vehicle have been modelled on since Julian Caldow revolutionised the Batplane’s design in 1989.

That summer, Chris Nolan overhauled the Batwing’s design – and name – in The Dark Knight Rises. The LEGO Group’s own version of The Bat arrived in 2013 in 76001 The Bat vs. Bane: Tumbler Chase. Just like in the film, this model was a marked departure from all Batwings before it, and remains an odd but fascinating curio in Batman’s arsenal.

Its innovative design clearly inspired the LEGO design team, though, because 2014 brought us another wildly different interpretation of the Batwing in 76013 Batman: The Joker Steam Roller. This unusual aircraft used its wings to pincer minifigures, which we’re sure would be quite graphic in reality.

Both Juniors and polybag versions of the Batwing also launched that same year, but 2015 passed by without a single iteration of the vehicle. Thankfully, Zack Snyder came to the rescue in 2016 with Batman v Superman: Dawn of Justice. The LEGO Group produced three sets based on the polarising follow-up to Man of Steel, including 76046 Heroes of Justice: Sky High Battle.

So, another set, another alternate take on the Batwing. Perhaps more than any other, though, this DC Extended Universe ship shared its DNA directly with its corresponding Batmobile, right down to those unique cockpit elements.

What followed was the biggest year for the Batwing (and LEGO Batman) yet. The LEGO Batman Movie arrived on screens in 2017, and brought with it a cornucopia of Batsuits, Bat-villains and Bat-vehicles – including four different Batwings.

Okay, so one was a polybag, one was a LEGO Dimensions mini-build, and one was simply a detachable part of 70917 The Batmobile. But 70916 The Batwing remains one of the best Batwings to date, largely thanks to the striking shaping of its wings.

Taking inspiration from Caldow, 70916 apes the Bat-logo – but not that of Tim Burton’s Batman. Instead, it recreates The LEGO Batman Movie‘s brick-built insignia, and does so with considerable heft. At the time, it was the biggest and bulkiest Batwing to date.

The LEGO Group then scaled things back again in 2018 with 76111 Batman: Brother Eye Takedown. That set’s Batwing arguably did a lot with a little, capturing the Bat-shape with minimal fuss. Unfortunately, the bulging cockpit mostly ruined the sleek aesthetic it was aiming for.

For the past two years, though, the company’s attention has been squarely on Burton’s Batman, and Caldow’s Batwing. 2019 brought us a minifigure-scale version in 76120 Batwing and The Riddler Heist, and it wouldn’t be crazy to call it the definitive incarnation. The size, shaping and scale are all spot on, so if you don’t have room to display its recently-announced bigger brother, it’s definitely the one to go for.

But if you do have the space to accommodate it, 76161 1989 Batwing is shaping up to be the biggest and best Batwing yet. For the proof, just check out our in-depth review ahead of the set’s VIP release on October 21.

And while you wait, here’s five things you probably didn’t know about the Batwing, and the five most valuable Batman minifigures.

To continue to support the work of Brick Fanatics, please buy your LEGO Batman sets from LEGO.com and Amazon using our affiliate links.