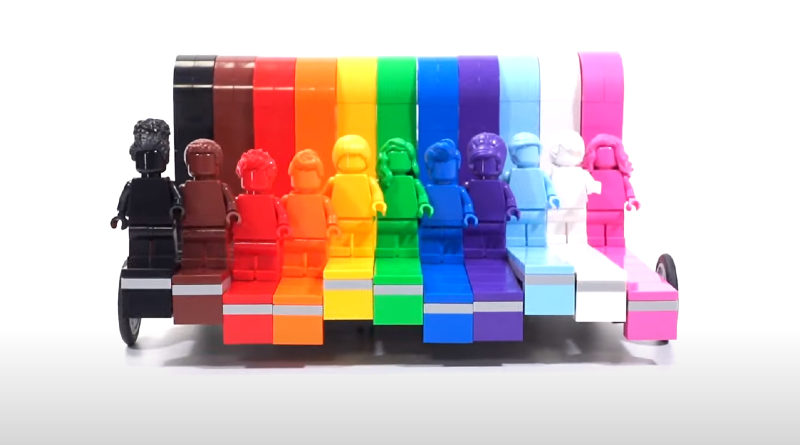 Builders are continuing to show their appreciation of LEGO 40156 Everyone is Awesome with the latest interpretation reimagining the LGBTQIA+ set as a moving model.

Yoshihito ISOGAWA is the mastermind behind the remixed LEGO build which uses a copy of 40516 Everyone is Awesome combined with a variety of Technic pieces and Power Functions motors to transform the initial build into a parade float.

Whilst the idea of having the static rainbow move with the help of some motorised wheels may not sound all too exciting on its own, the addition of each colourful stream raising and lowering independently makes for a mesmerising effect when on the move.

With the added movement to the model, certain elements of the original design lend themselves well and don’t prevent the motors from moving the model forwards. One of these is the position of the minifigures who are able to move up and down without colliding with one another thanks to how they are placed in the original design.

LEGO designer for the set, Matthew Ashton even commented on the creation via Twitter, stating “Oh my goodness! Now this is awesome!”. He appears to be impressed. It’s not the first time a builder has put their own spin on the new model as another has applied a superhero overlay to the LGBTQIA+ set

LEGO 40516 Everyone is Awesome is available now from the official online store, but certain regions may not be stocking the set at all. The LEGO Group have commented on the global availability issues as legal obstacles block sales of the model.