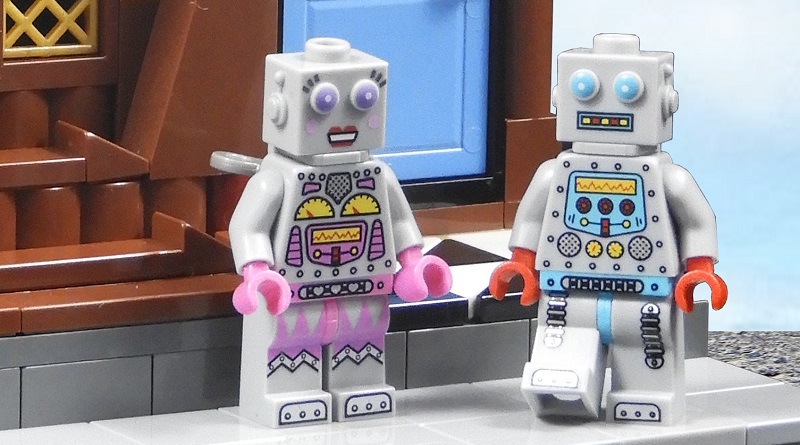 Taking inspiration from a handful of 16×16 thin base plates and the wonderful world of Collectible Minifigures, Justin Winn presents Minifigure Street

With the varied characters of the Collectible Minifigures (CMF) series providing plenty of inspiration, I decided to build a series of six modular houses for six distinct pairs of minifigures. Each build starts with the same template so that the houses can be fixed together to form what I have named Minifigure Street.

Taking the concept one step further, I spent some time in a popular graphics editor to render the images as if they were real LEGO sets. Enjoy!

The first three builds feature the Caves, the Discos and the Ogres.

The Robots are a quirky couple who are fixated on all things clockwork. They commissioned this timber and cog build which was designed based on original sketches that Mrs Robot produced when she was in art college. Mr Robot has a small workshop in the roof space where he tinkers with old watches, spending hours on getting them functional again.

Clockwork Robot (CMF Series 6) is one of my all time favourite minifigures – it’s simply perfect. The head and key parts compliment the fantastic print design and the use of red hands is inspired.

No prizes for guessing who lives here! Spooky Boy and Spooky Girl are siblings who enjoy all things eerie and scary. Their house includes gargoyle statues, bats and a pet spider who spends most of his time scurrying around the modest balcony spinning webs.

This may be my favourite house on Minifigure Street. Spooky Girl was released first as part of CMF Series 12 followed by her monochrome counterpart in CMF Series 16. I love the roof parts which are taken from 9468 Vampyre Castle set, part of the LEGO Monster Fighters theme which also featured the much sought after 10228 Haunted House.

Ho Ho Ho! When they’re not in the North Pole making plans for Christmas, Mr and Mrs Claus spend time in suburbia and own a small property on Minifigure Street which they use to relax and recharge ready for their peak period.

There have been various versions of Santa over the years, across numerous sets and advent calendars including a Santa who appeared in CMF Series 8. Mrs Claus is a little harder to get your hands on – this version is from 10245 Santa’s Workshop. Olaf makes a guest appearance in the build and he sees rather excited about the present that’s dropped at his feet.