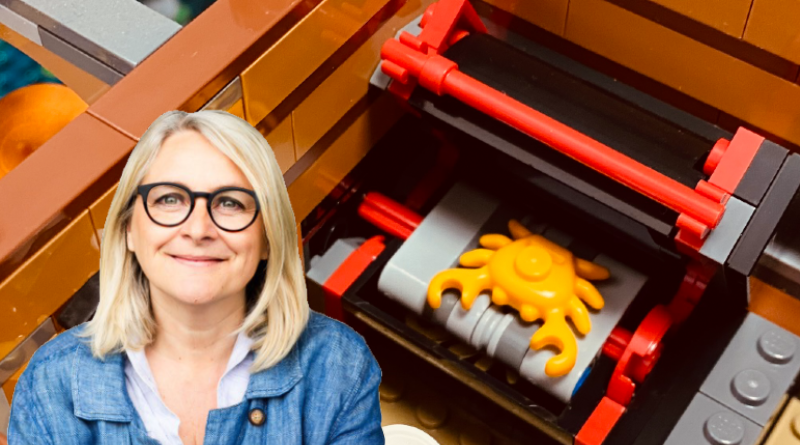 There are so many things to be excited about when a brand new LEGO set lands: what pieces are coming, are there bits you’ve never seen before, are the bricks a colour you love, is there going to be a new way to build a light or a shop till? (I sometimes think this is a secret internal challenge among LEGO designers.) It goes on and on, but the sharpest of thrills must be reserved for the holy grail of all LEGO sets: the glorious moving part.

I’m going to pause here, because I’m not talking about Technic sets. I know. I know. For some of you this will be akin to telling you I’m not that mad on sausages (this is an outrageous lie) or pies or cream, but LEGO vehicles of all kind leave me a bit… cold.

There are exceptions – I will concede that the VW Campervan is a thing of joyous beauty, the ejector seat in 10262 James Bond Aston Martin DB5 is super impressive, the Disney train surprised me with how much I enjoyed making it and 10261 Roller Coaster – despite the repetitiveness of the build – was magnificent at the end. But they’re not, in the main, my bag.

What I’m talking about are the unexpected moving parts that have climbed the mountain of whimsy and planted their flag firmly at the summit. So, this week I am embracing the moving parts that make me laugh or gasp or (and this really is the cup that floweth over) do both.

Encased in the chimney stack, this wonderfully simple bit of design allows you to drop a waffle straight into a waiting pan. This set also has a trio of collapsing bunks to get those pesky elves up and at ‘em, but it’s the waffler dropper that gets the big thumbs up from me.

It is the greatest moving part in any LEGO set and I will accept no arguments on this. You’re just going to have to accept it. The nefarious Crab Chef may be up to no good, leaving false moustaches underneath toilets, but it’s his ability to take a pale raw crab and turn it into a lovely red cooked one that will have even the most cynical non-LEGO fan making “oooooh” noises.

I mean, natch, it’s a moving sushi bar for heaven’s sake. What’s not to love?

It’s the third moving part outing for 70620 NINJAGO City (rightly so), and it’s the cash dispenser that actually dispenses cash. For popping eyes and wow factors, this one is right up there. Yes, I will take $100 of your LEGO money, thank you, and no, I do not need a receipt.

So simple, it almost hurts. But when you realise what the mysterious hole in the back wall is actually for, you can’t help but yelp for joy.

Excuse me? The LEGO designers factored criminal activity into a modular building? Of course they did. Where have you been? How soon you forget the shady barber right next door to the detective’s office. This, to my mind, is where the designers of the modular buildings excel – creating stories in the build – and in 10251 Brick Bank, they hit it out of the park. Not only is there the most exquisite launderette bumping up against the bank, but you can launder your plastic LEGO cash straight into the vault.

A Super Mario game, in tiles, moving in front of your very eyes. It’s like you’re watching a magic trick. It’s no trick, it’s a piece of LEGO genius, that’s what.

I could go on and on, but let’s give shout-outs to the lift from 10273 Haunted House, the rotisserie from 70657 NINJAGO City Docks, the exploding jail cell wall in 6755 Sheriff’s Lock-Up, the kicked chair in 70840 Welcome to Apocalypseburg and last but not least, the sliding bookcase in 76052 Batman Classic TV Series – Batcave that reveals two poles for Dick and Bruce to slide down.

Moving parts are the nuggets of joy that elevate any set. More please, LEGO. Let’s get moving.