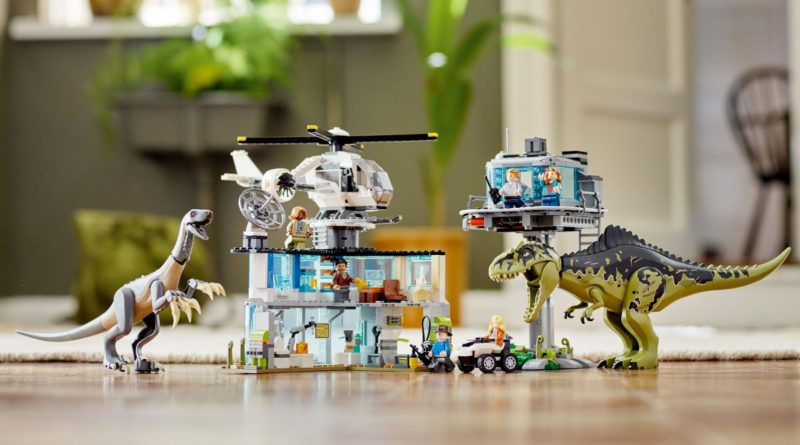 76949 Giganotosaurus & Therizinosaurus Attack – a large set in the LEGO Jurassic World theme – has been discounted in the latest Zavvi LEGO offers.

Taking inspiration from Jurassic World: Dominion, 76949 Giganotosaurus & Therizinosaurus Attack offers an impressive laboratory scene and a pair of fearsome dinosaurs. The set’s large size means a high RRP of £119.99. However, Zavvi are now offering it for £97.99 – a saving of £22.00.

This set includes two buildings, a pair of vehicles and two dinosaurs – as well an impressive minifigure selection. The main lab includes equipment like an egg incubator, chunks of amber, computer screens and a charging station for an electric ATV. The watch tower, meanwhile, features a collapsible balcony – allowing you to simulate dino damage.

The helicopter in the set features a removable equipment station and seating for one pilot. New character Kayla Watts is provided for this purpose, alongside characters like Owen Grady, Claire Dearing and Dr Wu. Jurassic Park alumni Alan Grant and Ellie Sattler round out the cast, and may prove enticing to older LEGO fans.

Of course, the dinosaurs themselves may be the biggest draw. The Giganotosaurus and the Therizinosaurus tower over the minifigures and offer several points of articulation. Large claws can be found on the Therizinosaurus, and their position can be adjusted.

If you’re a Jurassic World fan, this is an excellent set to add to your collection. Delivery within the UK costs £1.99, although international shipping is available for £3.99 to the US.