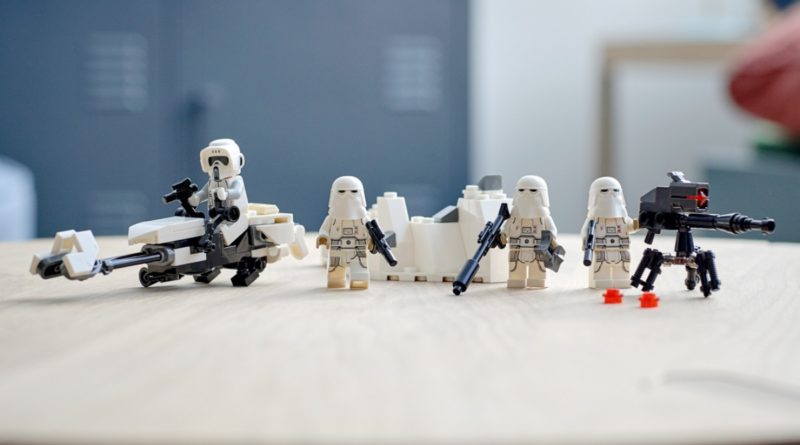 With the official reveal of LEGO Star Wars 75320 Snowtrooper Battle Pack, we’re taking a closer look at what’s included in the set.

75320 Snowtrooper Battle Pack should be a welcome (if more expensive) addition to any LEGO Star Wars fan’s collection and the perfect compliment to 75313 AT-AT. Included in the set are three Snowtroopers, an all-new Hoth Scout Trooper, Hoth speeder bike, E-Web blaster and a snow trench. At first glance all of the minifigures may appear to have been released before, but looks can be deceptive.

It’s also interesting to note that the E-Web heavy repeating blaster included in the set is actually a slightly different LEGO build from the one found in 75313 AT-AT. While the tripod base is the same, a muzzle piece has been changed and a stud launcher is attached to the back of the cannon.

The Hoth Scout Trooper is unique to this set, with grey sections replacing black on the main body and legs, grey arms instead of black and the minifigure has white hands. The Hoth speeder bike appears to be the exact same build as the two included with 75313 AT-AT, but whether you want to try and squeeze another of those into your walker instead of more Snowtroopers is up to you.

75320 Snowtrooper Battle Pack will be available to buy from January 1, 2022. Be sure to keep an eye out for our full review of the new LEGO Star Wars set next month.