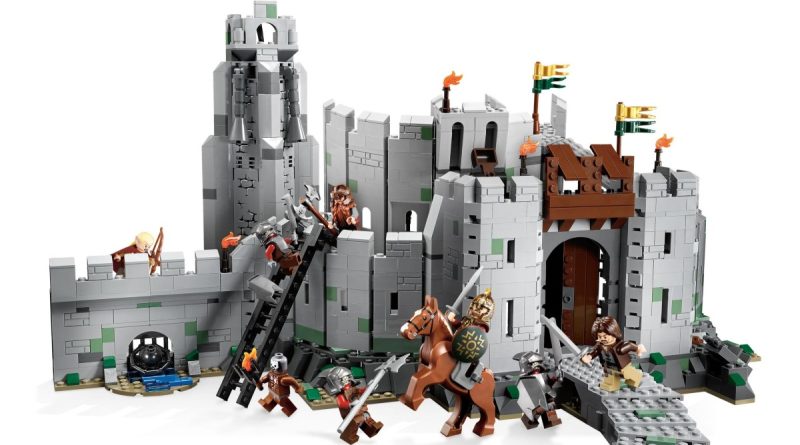 With The Rings of Power now streaming, we’re looking back at the retired LEGO The Lord of the Rings and The Hobbit themes to see which sets are the best.

Middle-Earth is back on screens with the debut of The Lord of the Rings: The Rings of Power on Amazon Prime this past weekend. The LEGO Group’s familiarity with this franchise runs deep with themes inspired by both The Lord of the Rings and The Hobbit, though they have not been active for a while.

To remember the legacy of LEGO The Lord of the Rings and The Hobbit, let’s look back at six of the best Middle-Earth LEGO models and what makes them stand out against other fantasy themes.

Arguably the most peaceful of the LEGO The Lord of the Rings and The Hobbit sets is 79003 An Unexpected Gathering, capturing the idyllic nature of hobbit-holes, homes for Hobbit housed under a hill with round doors, windows and other circular features.

Unfortunately, we never saw a full Rivendell model in LEGO The Lord of the Rings with 79006 The Council of Elrond being the only brick-built representation of the Elven town to date. Still, it manages to feature the iconic arches and architecture that make Rivendell recognisable.

LEGO 79018 The Lonely Mountain stands out from the rest of The Hobbit models, not for its build or its minifigures, but for the massive Smaug figure, forming one of the strangest Benedict Cumberbatch LEGO figures ever.

The design team used several specialised elements to bring Smaug to life in bricks and he’s likely one of the reasons why 79018 The Lonely Mountain fetches prices of over £400 on the aftermarket as there’s simply no LEGO dragon quite like Smaug.

When you search for LEGO The Lord of the Rings online, you’re almost certain to find 10237 The Tower of Orthanc as the theme’s largest set – by any metric – recreates the imposing tower standing tall at 73cm high.

Using 2,359 pieces, including a light brick, 10237 The Tower of Orthanc isn’t like any other fantastical LEGO set. The build has such an iconic and menacing design that sets it apart from any other official LEGO towers on the market. The minifigure selection, as well as Treebeard, also assist in this matter.

LEGO The Lord of the Rings managed to sneak a big figure into the theme thanks to the cave troll in 9473 The Mines of Moria. This model depicts the ancient realm of the dwarves and a location that appears once more in The Rings of Power.

Though the set doesn’t quite manage to capture the sprawling nature of the mines, 9473 The Mines of Moria stands out compared to other Castle mine models such as 7036 Dwarves’ Mine for its grounded and more realistic design, and the cave troll certainly helps too.

One of the most recognisable LEGO The Lord of the Rings sets is 9474 The Battle of Helm’s Deep, depicting the fortress in bricks using 1,368 pieces. However, it’s not quite as unique as it once was thanks to the recent release of 10305 Lion Knights’ Castle, which shares many architectural elements such as the ramp and rocky base. Despite this, 9474 The Battle of Helm’s Deep represents one of the best LEGO castles to date and it can even be combined with 9471 Uruk-Hai Army for a bigger battle.

Though not exclusively featured in the set, the minifigure accessories such as the printed helmets are desirable and may have assisted in getting this set to prices of over £500 on the secondary market.