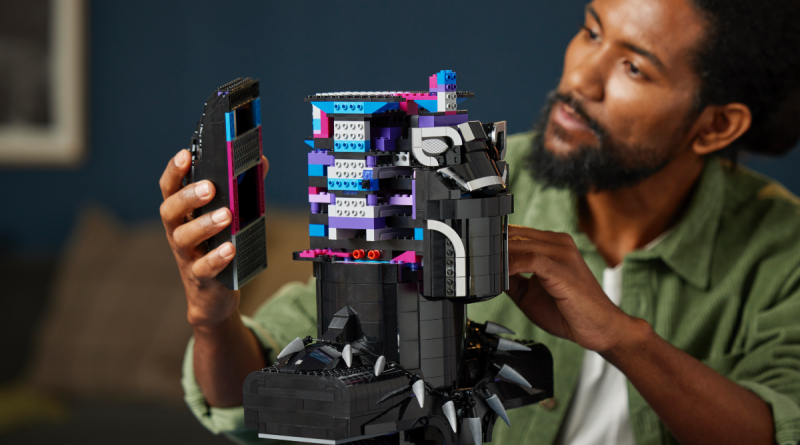 The reveal of 76215 Black Panther in the LEGO Marvel theme hints at even more expensive models in the years to come.

76215 Black Panther is an impressive addition to the LEGO Group’s slate of Marvel models. It depicts the costume of Wakandan hero Black Panther, complete with mask, necklace and clawed gloves. Product images show off the set’s many thoughtful details including drum-lacquered silver elements, transparent purple highlights and removable hands.

In terms of value it’s not too unreasonable; it only just goes over the 10p per element ratio, which is what we use to gauge a set’s worth. But it’s still a hefty chunk of change, and reflects a steady trend upwards in LEGO’s price and potential.

Through themes like LEGO Star Wars and LEGO Marvel, the LEGO Group has produced a number of helmet and mask models designed for display. We’ve already speculated that 76215 Black Panther could lead to more models of this ilk in other themes. But its presence also suggests these models could become more and more detailed, with few checks on either pricing or scope.

In the last couple of years, we’ve moved from simple models like 76165 Iron Man Helmet to this fully-featured Black Panther counterpart. It’s not a stretch to imagine something even more ambitious in the next few years: a complete upper torso, for instance. Or even – at the extreme end – a fully brick-built person available for purchase.

Admittedly, such a model may present insurmountable financial and logistical challenges. But we can’t overlook the fact that LEGO sets have gone to places we’d never have predicted in our youth. The most extreme example of this idea is 75313 AT-AT, released as part of Star Wars’ Ultimate Collector Series.

There has to be a ceiling for how much the average consumer will spend on a LEGO set; for most people, their ceiling is far below 75313 AT-AT. But that set’s existence doesn’t make it clear where such a ceiling actually exists. 76215 Black Panther – and the sets that may follow it – lends support to the idea that ceiling is much higher than we might think.

Of course, what could bring that ceiling crashing down is our interest in the licences being modelled. Many of the LEGO Group’s more expensive models take their cues from heavy hitters like Star Wars and Marvel. While neither of these IPs are going anywhere, it’s possible that franchise fatigue could set in and our interest could wane. If that happens, the LEGO Group may not wish to commit to such massive models going forwards.

It’s also possible that poor sales of this particular set may nip this strand of LEGO set in the bud. However, with Black Panther very popular at the moment – and a new Black Panther movie on the horizon – that seems like a long shot.

For now, then, we’re left wondering what the next step forward in LEGO models is going to look like. With LEGO as popular as it’s ever been, it’s almost certainly on the horizon.

76215 Black Panther will be available for purchase from LEGO.com on October 1.