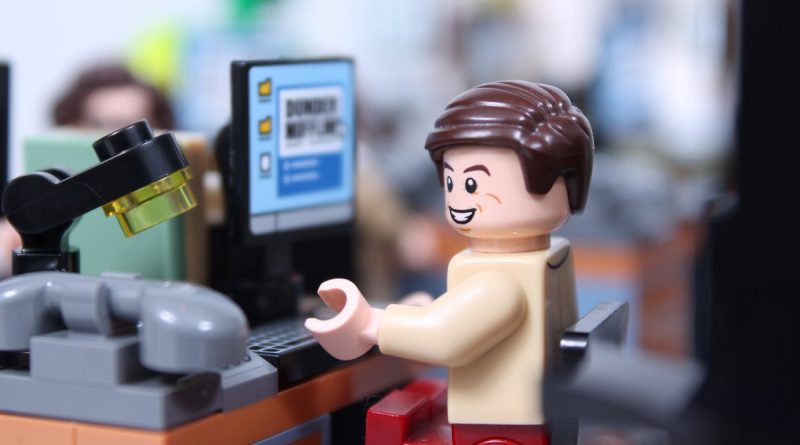 Looking to fill the gaps in LEGO Ideas 21336 The Office’s extensive minifigure line-up? Here’s how to build your very own Andy Bernard minifigure using existing pieces.

Probably 21336 The Office’s biggest omission as far as its characters are concerned – though the LEGO Group does have an official reason for leaving him out – Andy Bernard became a regular on the US sitcom in Season 3, portrayed by Ed Helms. The reception to Andy was mixed: some have described him as the show’s funniest character behind Steve Carell’s Michael Scott, while Vulture named him one of TV’s most annoying characters in 2011.

Whatever your thoughts on Andy Bernard, he played such a prominent role in The Office that no LEGO set based on the show is really complete without him. Fortunately, all the pieces we need to build an effective minifigure of the Nard Dog are already out in the wild – and relatively easy to come by. This design comes courtesy of reddit user CaptainRex831, who wasted no time in assembling Andy when 21336 The Office was originally revealed.

While the dark brown hair and dark red legs are pretty generic, and therefore more likely to already be in your collection, the head and torso are character-specific. You’ll find the head in two classic Ghostbusters sets – used for Ray Stantz on both occasions – and on a SHIELD agent in Marvel’s 76036 Carnage’s SHIELD Sky Attack, while the torso belongs to Ross in 21319 Central Perk.

None of these pieces are particularly expensive to obtain: the head can be had for as little as 80p new on BrickLink, while Ross’s torso is actually even cheaper at 64p (at the time of writing). There’s a chance the price of that piece will increase once 21319 Central Perk retires later this year, but the set has been out for so long that it’s hard to see it skyrocketing.

All in all, you’re looking at around £1.76 for all four elements in new condition on BrickLink (before shipping), which makes adding this minifigure to your copy of 21336 The Office a no-brainer. Throw in an acoustic guitar – or, if you’ve got 71033 The Muppets’ Kermit, a banjo – and you’ve got the perfect Andy Bernard minifigure, ready to punch a hole in the wall of Dunder Mifflin.

Check out our full review of 21336 The Office here, and consider supporting the work that Brick Fanatics does by purchasing your copy using our affiliate links. Thank you!