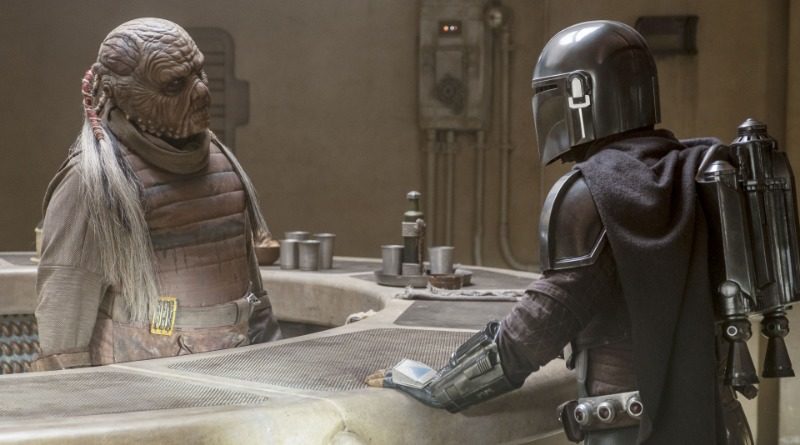 The second season of Star Wars: The Mandalorian has finally arrived. Brick Fanatics recaps the first episode through a LEGO lens, with the sets, builds and minifigures you’ll need to recreate it at home.

The Mandalorian’s second season opened with an epic part-western, part-Kaiju tale, as our legendary gunslinger faced off against a Krayt Dragon on the sands of Tatooine. The Marshal is a perfect example of what’s so great about the show, effortlessly blending genre, character development and world-building against the backdrop of an involved story and intense action.

And that’s all well and good. But what you really want to know is: how easily can I recreate this episode in LEGO bricks? The LEGO Group has only released five sets based on the show so far, and only three of those have been in minifigure scale. But as we’ll see, The Marshal’s focus on Tatooine complements the wider LEGO Star Wars portfolio perfectly.

The episode opens on a mystery planet, as Mando continues his quest to return The Child back to the Jedi. This stage of his search apparently involves grilling John Leguizamo’s one-eyed alien Gor Koresh for information on other Mandalorians, in a sketchy-looking arena that sees Gamorreans engaged in mortal combat. While the LEGO Group does have an official Gamorrean minifigure, it last appeared in 2013’s 75005 Rancor Pit, so you’ll need to head to the secondary market to grab a pair.

Koresh eventually points Mando in the direction of Tatooine, so the dynamic duo hop back in the Razor Crest to continue their journey. As you’ll probably have guessed, that means you’ll need a copy of 75292 The Mandalorian Bounty Hunter Transport, but that really feels like a prerequisite for any LEGO The Mandalorian action. Not only do you get Mando’s ship, but you also get Din Djarin himself, plus The Child and a couple of season one regulars, Greef Karga and IG-11.

Heading back to Tatooine means returning to locations and characters established in that first season, including Amy Sedaris’s Peli Motto and her gang of pit droid mechanics. Mando had a change of heart towards Star Wars’ androids in Chapter 8, and he even allows them to fix up the Razor Crest. Happily, the LEGO Group seemed to predict Motto’s return, as this year’s 75279 Star Wars Advent Calendar includes a minifigure-scale pit droid. Motto is also in possession of what appears to be R5-D4, the astromech droid with a famously bad motivator, which you’ll find in minifigure form in 2014’s 75059 Sandcrawler.

The show then continues to build on Tatooine’s rapidly-expanding lore by whisking our heroes to Mos Pelgo. Erased from maps of the planet following a post-Empire power struggle, the tiny town is little more than a single street of buildings. Helpfully, the LEGO Group has just released the perfect set for that: 75290 Mos Eisley Cantina. The side builds included in the massive LEGO Star Wars model are really the perfect starting point for recreating Mos Pelgo.

Our heroes hop on Mando’s personal speeder bike to reach the practically-abandoned town. Alas, 75292 The Mandalorian Bounty Hunter Transport omits Din’s ground vehicle, so we’ve put together our own version instead. Look out for instructions soon.

Finding a lost town isn’t easy, so Mando and The Child seek directions from a clan of Tusken Raiders. We’ve had plenty of Sand People minifigures over the past few years, but your best option is probably 75265 T-16 Skyhopper vs Bantha Microfighters. That’s because it also includes the LEGO Group’s first and only Bantha (even if it is in Microfighter form), of which there are many in this episode. Hopefully their prominence will finally persuade the company to release a moulded minifigure-scale Bantha in the near future.

We then meet the episode’s eponymous Marshal, played by Timothy Olyphant – and wearing Boba Fett’s armour. There’s obviously no shortage of Boba Fett minifigures out there, although with the imminent retirement of 75243 Slave I – 20th Anniversary Edition, there are actually none on the market right now. Of course, the Marshal only has Fett’s helmet, jetpack and breastplate, so we’ve altered our own Boba minifigure to match.

Mando and the Marshal almost come to blows over the outlaw’s misguided cultural appropriation, but they’re interrupted by an enormous Krayt Dragon racing beneath the town’s shifting sands. That sets up the episode’s action-packed climax, but first, we get a flashback that has some serious synergy with the LEGO Star Wars line-up. The Marshal’s tale of his struggle against the Mining Collective involves a cameo appearance by the V-35 Courier Landspeeder, which has just debuted in LEGO with 75290 Mos Eisley Cantina. This scene also throws up another reason to pick up the long-retired 75059 Sandcrawler, as the Marshal recalls how he purchased Fett’s armour from the Jawas.

This story is regaled from the seat of the Marshal’s speeder bike, which looks to have been appropriated from Anakin Skywalker’s podracer. Even if it isn’t that exact engine in-universe, the design is definitely close enough to warrant picking up 75258 Anakin’s Podracer – 20th Anniversary Edition to fashion your own.

The Marshal now runs Mos Pelgo, but the Krayt Dragon could ruin all that, so he enlists Mando’s help in exchange for the armour. The rest of this chapter focuses on the incredible showdown with the legendary Star Wars creature, which we’ve unfortunately never seen in LEGO form. The beast’s size suggests we probably never will, either, so this is one you’ll probably need to tackle yourself.

The episode closes with a guest appearance from a very familiar face for Star Wars fans: Temuera Morrison, the actor who portrayed Jango Fett and the Clone Troopers in the movies, presumably now playing an aged – and very much still alive – Boba Fett. The new Clone Trooper face in 75280 501st Legion Clone Troopers is probably a good starting point for recreating this new version of the iconic bounty hunter, but fingers crossed we see an official minifigure down the line.

There might only be five official LEGO Star Wars: The Mandalorian sets so far, but at least for this first episode, the wider line-up of sets is almost uniquely positioned to recreating the action-packed events of The Marshal. That’s obviously aided by the season leaning into some classic Star Wars locations, characters and motifs, so we’ll have to wait and see if the rest of the season plays out the same way.

For now, you can catch up on the first episode of The Mandalorian’s second season on Disney+. And for convenience’s sake, here’s the full list and images of sets we mentioned in this list that are available to buy right now (or should soon come back into stock):

You can help support Brick Fanatics by ordering them from LEGO.com using our affiliate links.

One thought on “Building The Mandalorian in LEGO bricks: Chapter 9”