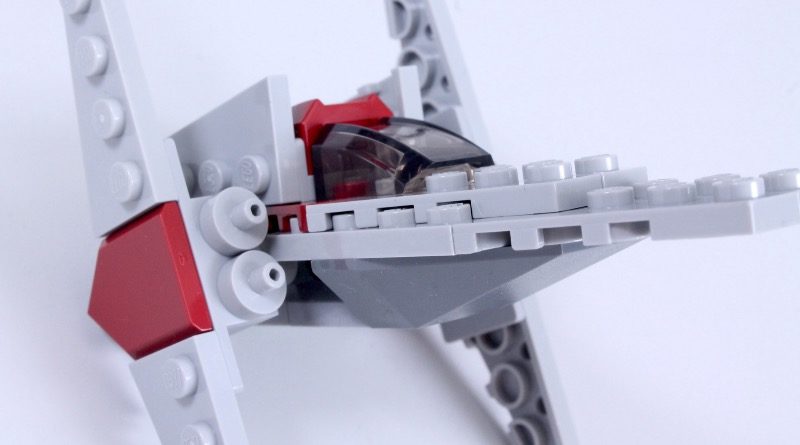 This month’s edition of the official LEGO Star Wars magazine brings us our first rendition of a certain Revenge of the Sith set since the heady days of 2014.

75039 V-wing Starfighter was the last time the relatively-obscure Republic ship – which appeared on-screen in Episode III for just a few seconds – graced LEGO Store shelves. Since its cinematic debut in 2005, the fighter has popped up across other Star Wars media including video games, novels and comic books, cementing its legacy in the wider ‘Wars pantheon.

And while all that might not be enough to bring it back in a System theme consumed by constant X-wings and Landspeeders, it is enough for the LEGO Group to justify offloading even more dark red elements through the Star Wars magazine’s foil-bagged freebies – which have recently included similarly-coloured mini models of Obi-Wan’s Jedi Interceptor and an A-wing Starfighter.

This version of the V-wing makes clever use of modern LEGO parts, including pentagonal tiles and 1×1 round tiles with shafts, for a surprisingly authentic recreation of the craft in just 45 pieces – including its folding wings, which act as landing gear in-universe.

The lack of forward landing gear does see the ship tilt forward slightly when the wings are folded down, while a couple of trans-clear elements to display it in flight would also have been appreciated. But you can’t really complain at just £3.99, which is the cover price for Issue 70 of the LEGO Star Wars magazine.

You can grab your copy right now from all good supermarkets and newsagents. Next month’s issue will keep the mini model party going with a tiny buildable TIE Bomber.