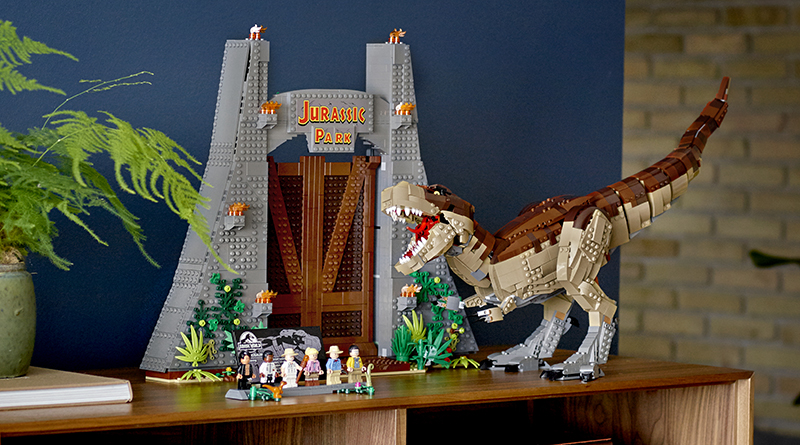 In an exclusive interview, LEGO Senior Model Designer Mark Stafford reveals how he researched LEGO Jurassic World 75936 Jurassic Park: T. rex Rampage and explains why it does not include a vehicle

Sometimes there is a LEGO set that is so pleasantly surprising when it is seen for the first time that the first instinct is to tell everyone about it. Everyone. But for those few who were at the LEGO Fan Media Days at the LEGO Group’s headquarters in Billund, there was to be no telling about LEGO Jurassic World 75936 Jurassic Park: T. rex Rampage.

Based on a sketch model that the LEGO Group’s Mike Psiaki had sitting around, the model was developed into a fully-fledged set by Senior Model Designer Mark Stafford. Evidently excited to be sharing his project for the first time, he explained to Brick Fanatics how he brought the cinematic icon to LEGO life.

What reference material did you use?

All the way through designing it I was looking at the movie, but I also pulled reference from the web – from the original Jurassic Park they have released a lot of stuff. I actually had some at home already, I had the portfolio of prints and that is really where the colour scheme came from. When you back to those original CG stills that showed the t. rex in white light – it is never really seen in white light in the movie – it is almost in these LEGO colours. The striping is very subtle but it is there, so I wanted to get the striping in to make it more interesting to build. I could have built it all in dark tan, but it would have been quite dull I think at that point. I was trying to bring some interest to the shaping with the colour.

How happy were you with the final proportions of the model?

It is pretty close. There were compromises when trying to make sure that the legs were in the right place on the body – they drifted forwards at one point. This Jurassic Park t. rex has become so iconic in people’s heads, if you see another t. rex that isn’t quite at those proportions, it looks wrong and it is the same with the LEGO version, it just looked wrong when the proportions changed. 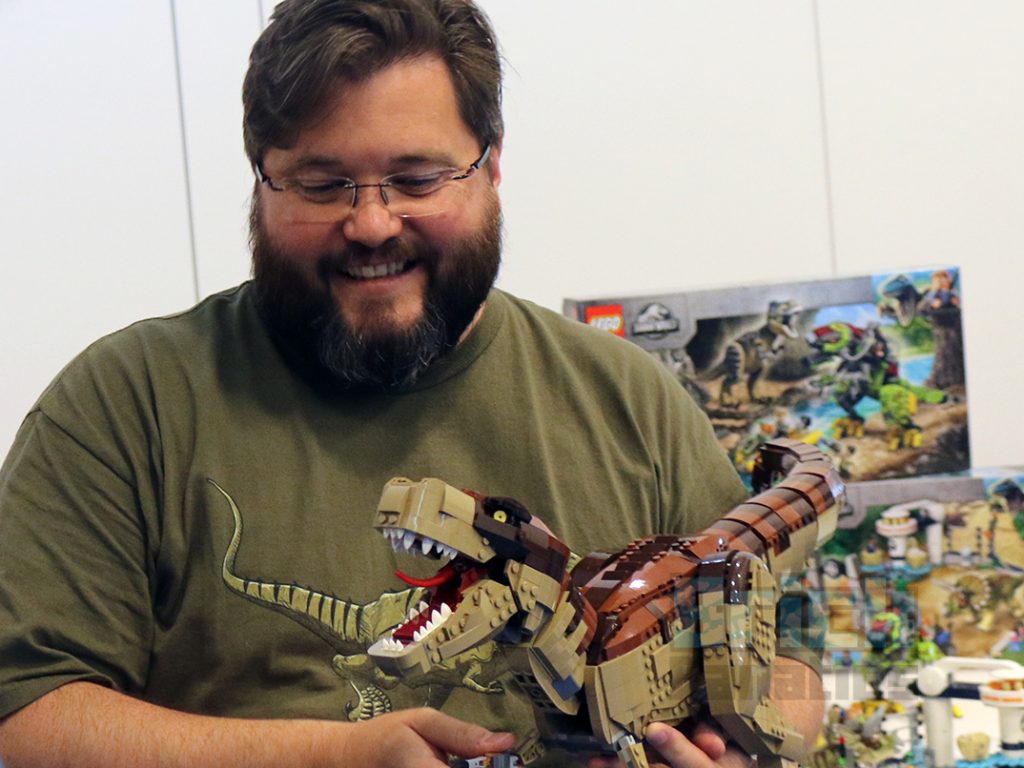 To produce a dinosaur build at this size, you stepped away from minifigure scale.

This is a much bigger scale than minifigure, it is one of the reasons there is no jeep or Ford Explorer here – the minifigures on the stand it is like a bonus thing, they are not to the right scale of the t. rex. The t-rex is twice the size it should be – our original t-rex is the right size, the clip together one. Any car we did, you would really want the scene where it is chasing the jeep down the road, but that car would be too big for minifigures, and without the figures in the car there is no jeopardy, there is no interest.

Then we put the vignettes in the back, to say, “by the way, we love the movie”. There are some minifigure scale aspects here hidden away at the back of the gates.

Were you tempted to include either of the cars?

One day we want to do the Explorer and Jeep, but for now there is legal issues around who we pay our licence to. I don’t know all the details around that, but it is hanging around at the back of our mind. We have quite a few versions sitting around, hoping they will be useful. This dinosaur is a great example of that, it was sat around from 2012 until 2018 before anything happened with it – so it is just the way it goes.

How did you choose the minifigures who are included?

Which are the most iconic figures? We are missing the kids but they were in a Jurassic Park set last year. I am gutted we don’t have Genarro here, the lawyer, and we don’t have the hunter, played by Bob Peck. Muldoon is probably my favourite character. He has my accent, I am from East Yorkshire and that is where he is from. I have got his gun cabinet in here, so if we ever get a chance to come back to Jurassic Park again and I have any say I am pushing for Gennaro and Muldoon. Then run out of characters from the original Jurassic Park because everybody else is evacuated from the island and it is just about the threat to these characters.