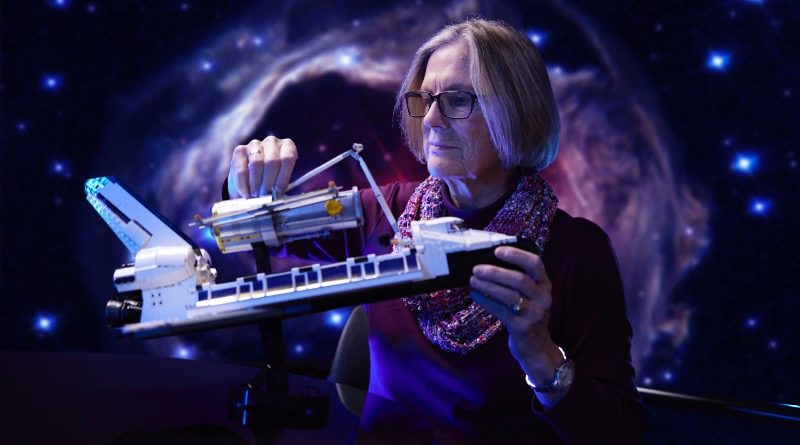 April looks sure to be a relatively quieter month for new LEGO releases than March, but there are still some heavyweights to watch out for – including five brand new 18+ sets.

The LEGO Group took the unusual move of splitting its usual winter wave into two halves for 2021, which meant dozens of new products launched on March 1. By contrast, only eight or nine sets are currently on the cards for April – although we’re sure the LEGO Group will have plenty of surprises in store beyond these already-confirmed releases.

For now, though, here’s everything we definitely know is launching this month, plus one educated guess.

The LEGO Group’s latest journey into the stars is anchored around the Space Shuttle Program’s 35th mission, STS-31, which saw Discovery deploy the Hubble Space Telescope. 10283 NASA Space Shuttle Discovery includes all the elements you need to recreate that 1990 mission in style, a feat also helped by the record number of drum lacquered silver pieces in the box.

If you’re a LEGO VIP, the latest Ideas set has already been available to you for a couple of weeks. But if, for whatever reason, you haven’t signed up to the LEGO Group’s loyalty program – and you really should, at least if you like free stuff – 21326 Winnie the Pooh can now be yours, too. The 34th LEGO Ideas release comes courtesy of fan designer Ben Alder, who took Brick Fanatics on a tour through the Hundred Acre Wood to discover the secrets behind his dream LEGO set.

The next series of Collectible Minifigures will launch on April 26 for the welcome price of £3.49 / $4.99 / €3.99. Early reports indicated 71030 Looney Tunes would see the blind-bagged characters rise to $5.99 in the US, but the LEGO Group has now confirmed that their price will remain consistent with 71029 Series 21.

Two brand new additions to the LEGO Star Wars Helmet Collection will debut on April 26, but you can actually pre-order them from LEGO.com right now. 75304 Darth Vader Helmet and 75305 Scout Trooper Helmet come in as the largest and smallest sculpts from a galaxy far, far away to date, and stick very closely to the Imperial theme set by last year’s models. If you haven’t pre-ordered them already, act fast: we wouldn’t be surprised to see these sell out straight away.

The LEGO Group’s range of buildable Star Wars characters expands to encompass a familiar foe from The Empire Strikes Back later this month with 75306 Imperial Probe Droid. Launching on April 26 alongside the two new helmets (see above), the 683-piece set will retail for £59.99 / $59.99 / €69.99, and can be pre-ordered from LEGO.com right now.

US fans can get their hands on 76199 Carnage a little earlier than everybody else, with the sinister symbiotic sculpt available to order at LEGO.com from April 11. The rest of us will have to wait until May 1 to get our hands on the madcap Marvel character’s bust, but in the meantime, 76187 Venom will be bringing another type of carnage for everyone starting April 26. It seems safe to assume that both are a nod to September’s supervillain sequel Venom: Let There Be Carnage.

LEGO Marvel is hoping to mech your month with the release of a single set containing two new superhero suits of armour, one for the web-slinging Spider-Man and another for the nefarious Doctor Octopus. 76198 Spider-Man & Doctor Octopus Mech Battle is the latest in the LEGO Group’s range of Marvel mechs and will release on April 26, just in case the three sets from earlier in the year weren’t enough to suit your mechanical tastes.

The Dark Knight himself is next up for the LEGO helmet treatment as the Caped Crusader’s cowl is recreated with 410 bricks, ready to pair with other superhero helmets. As the first DC LEGO helmet, 76182 Batman Cowl will launch on April 26 displaying the iconic visage of one of the most recognisable superhero on any shelf, desk, or anywhere that needs the protective gaze of Batman.

Two new toys will be joining Batman’s ever-expanding garage with one revisiting a classic series, and another introducing younger builders to Gotham City’s many friends and foes. Both 76188 Batman Classic TV Series Batmobile and 76180 Batman vs. The Joker: Batmobile Chase will be available on April 26.

The majority of the LEGO Minions theme has been in limbo since Universal pushed Minions: The Rise of Gru back from its original 2020 release date – first to 2021, then again to summer 2022. The LEGO Group has clearly decided that enough is enough, however, and will finally offload its inventory of 75550 Minions Kung Fu Battle, 75547 Minion Pilot in Training, and 75546 Minions in Gru’s Lab from April 26. (That’s shaping up to be an expensive Monday.)

Update: All three Minions sets have now been delayed again to May 24.

April’s US LEGO Store calendar gives precisely zero hints to any early VIP releases this month, but the rumoured LEGO Marvel Daily Bugle is said to be launching in either April or May. A wise bet would be a VIP release for the former and a wide release for the latter, following in the footsteps of early-access sets like 10295 Porsche 911 and 21326 Winnie the Pooh – but that’s if the set exists at all, of course…