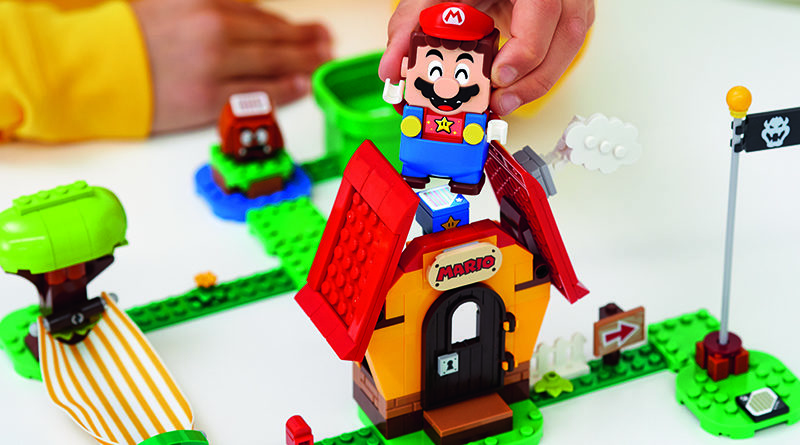 LEGO Super Mario is set to launch on August 1, bringing the beloved video game franchise to the physical world. Fans will be able to build a level and then, using the unique interactive Super Mario figure, play through the level to see if they can beat the boss and earn coins.

In the first part of an exclusive interview with Brick Fanatics, LEGO Design Manager Jonathan Bennink and Marketing Director Christian Munk reveal how the collaboration between the LEGO Group and Nintendo came about, leading to the first decisions about what LEGO Super Mario would be.

Jonathan: Four years ago my boss at the time asked, “do you want to be on the Nintendo project?” and I said “yes, of course”. That was a very easy answer. The conversations actually started half a year earlier, around 2015 I think, when the management of both companies met up and talked. There were a lot of things in common, both of the brands make family friendly products, quality is high on the agenda and they both make light hearted toys or games.

They decided that they wanted to work together and they gave me and my team one brief, and it was to make something that only LEGO and Nintendo could do together. So when you look at it, that’s a LEGO product, that’s a Nintendo product, but it can only come from these two brands together. That also meant that we needed to have a digital aspect in there because we know Nintendo is exceptionally good at making interactive experiences and digital experiences, so by having some sort of digital component to the play we would also be able to leverage their competencies.

We came up with a buffet of eight ideas and six or seven of them had this digital component in them. These ideas were voted on by management of both companies, and they actually voted on this little brick, this guy [gestures to LEGO Mario] size, that had a little display just drawn on it. He was a Mario figure but interactive and that got the most votes.

We took that back to Billund and made a prototype of it. Nintendo also made a protype of it and we had our first Mario in digital form with a display, speaker and RFID chip underneath so he could recognise bricks and we just instantly fell in love with this little interactive guy. From there on we said anything we do will be around him.

It sounds like Nintendo were not just licensing partners but real collaborators on this project.

Jonathan: That’s been a super interesting journey. Nintendo made a prototype because they are just really good at all those digital devices with screens in it and they had a bunch of parts lying around. That’s why they made the first prototype, theirs was a little bit different to ours, but I think all in all it was finding the balance between them.

We have been working with the brick for a long time and then having the opportunity to do something digital, we sometimes went a bit too far. Our protype was mainly about motion games where you could run around the room and jump to get coins, really fun stuff but then when we presented it back to our management, they were like “yeah, cool, but where’s the LEGO DNA here? Where are the bricks?” “He has studs on his head.” They were like, “no, that’s not good enough.” [laughs]

Then Nintendo on the other hand, they really love the brick and creativity so they would always push that agenda. I think the final product has ended up really nicely in the middle where there is a lot of Nintendo DNA here, with Mario being alive and reacting and having those famous sound effects.

But there is also LEGO DNA at the core of it because after that rough patch that we had, with management saying “where are the bricks?”, in one of the online brainstorms we came up with the idea of the start and the finish. And that anything you build in between out of LEGO bricks is a level. This was also the time where we added the colour sensor to it and this meant that Mario didn’t just react to the RFID bricks but also any other bricks, because he can read the basic LEGO colours. Now the whole level became interactive. Then we came up with the idea of collecting coins and you can get coins from jumping on the enemies, from beating the challenges. We added a timer to it, you can get blocks that will give you a little bit more time, for example on the Piranha Slide where you spend a lot of time balancing, you want more time. That is how it evolved into what it is now.

Christian: I think we have a unique partnership with Nintendo. This is a LEGO line and the LEGO development process but this has truly been cocreated together with the partner – three times a week we are having Skype calls with Nintendo, they have been helping us as Jonathan said with the tech part and also with the game part, what makes this fun for kids to play, so it’s a good Nintendo and LEGO experience. It’s all about being creative, so what we are hoping is the kids will create the coolest and wackiest creations possible and then play them out to see how many coins they can collect.

Check back next week for the next part of this exclusive interview feature.