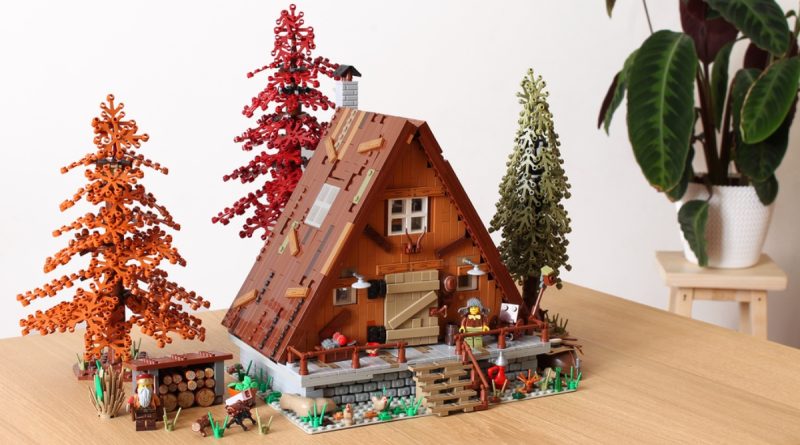 The next LEGO Ideas set is rumoured to be Andrea Lattanzio’s A-Frame Cabin, but it’s unlikely to make it to shelves without a few changes along the way.

No LEGO Ideas set is released exactly as it’s submitted to the crowdsourcing platform: instead, once it’s racked up 10,000 votes from the community and been given the green light by the review board, it must undergo rigorous testing to ensure it meets the LEGO Group’s stringent design standards. That can often mean subtle amendments, as in 21336 The Office, or drastic design changes, as we’ve seen recently with 21337 Table Football.

For Andrea Lattanzio’s A-Frame Cabin, which is thought to be the next LEGO Ideas set – numbered 21338 and launching in January or February 2023 – we hopefully won’t see too many alterations, as the original design is a real thing of beauty. But with one eye on previous LEGO Ideas sets, and the wider LEGO portfolio, here are five changes we reckon are inevitable…

The autumnal trees that surround Lattanzio’s cabin are wonderful, but we’re not so sure they’ll make it through to the final design. The LEGO Group has a history of simplifying particularly complex build techniques for a wider audience (often in the interests of making them stable and easier to put together) – 21325 Medieval Blacksmith springs to mind – so we’d be surprised to see the trees make it through unchanged.

Lattanzio uses LEGO elements in unique ways throughout his build, and one nice touch is on the stairs leading up to the cabin. These loosely rest 1×3 tiles printed with a wood grain and silver nails pattern – seen in sets like 75980 Attack on the Burrow and 21310 Old Fishing Store – to create a weathered, haphazard aesthetic.

Not fully attaching elements is a technique we’ve seen in previous LEGO Ideas designs, like Clemens Fiedler’s Medieval Blacksmith, but the LEGO Group has generally always replaced it with an assembly that’s easier to build. We’re therefore expecting the same to happen with the A-Frame Cabin. Unfortunate, but it makes sense.

Lattanzio’s concept includes two minifigures with unique designs, billed in his backstory as brothers. To give the final A-Frame Cabin more universal appeal, however – and to remove the need for an extended backstory to understand its minifigures – we can see the LEGO Ideas team swapping them out for more generic LEGO City-style characters.

21338 A-Frame Cabin’s is rumoured to retail for $179.99 in the US. Based on recent LEGO prices, we’re probably looking at a set that includes around 2,000 to 2,500 pieces at most – while Lattanzio’s original design looks to pack in slightly more than that top-end estimate. If there are cuts to be made anywhere to get it to fit into the LEGO Group’s budget, we reckon the woodworking table will be the first to go.

1 – A different solution for the roof

Given how quickly your eye is drawn to them, and how many fans have picked up on them throughout the A-Frame Cabin’s journey, we’re hoping the LEGO Group will keep the many Mjolnirs (or Thor’s hammers) that provide unique detail to the model’s base. What we’re not sure will stay the same is the roof, which again relies on tiles not fully applied to the studs beneath them.

Pushing those tiles all the way down would remove any sense of texture from the sloped roof, so while we don’t expect to see the same approach used in the final model, we are expecting the LEGO Group to have come up with an alternate solution – just as it did with the roof in 21325 Medieval Blacksmith.

We’ll hopefully find out more about 21338 A-Frame Cabin in the weeks and months to follow. For now, we know it’s happening, but its price, release date and whether it really is next in line are all just rumours, so take those details with caution.

Here’s a quick reminder of every LEGO Ideas set currently in production: