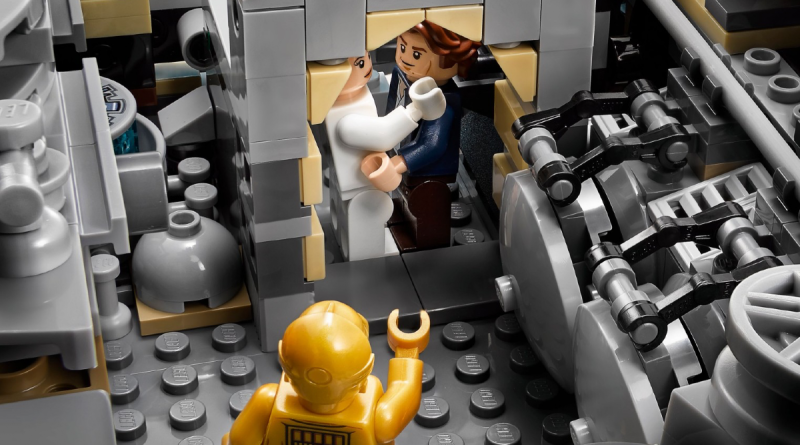 75192 Millennium Falcon is a particularly ambitious LEGO set – but it’s also more innovative than you might expect.

The LEGO Star Wars Ultimate Collector Series got a new MVP five years ago, with 75192 Millennium Falcon. This massive model combined the beloved Star Wars ship with an unprecedented level of detail, making it highly desirable for Star Wars fans.

While the set’s massive size and high price point may have pushed it out of reach for some LEGO Star Wars fans, we could still admire its innovations from afar – and there are definitely a few to pick up on. Here’s five things that 75192 Millennium Falcon did before any other LEGO set.

LEGO sets have been steadily increasing in price for several years, with the likes of 10221 Super Star Destroyer and 70620 NINJAGO City pushing the boundaries of LEGO fans. The arrival of 75192 Millennium Falcon pushed that ceiling to new heights upon its release, debuting with a price tag of £649.99 / $799.99 / €799.99.

While that’s a hefty chunk of change to spend on – well, anything, it didn’t stop the set from selling out on multiple occasions following its release. It also hasn’t stopped the set’s price from significantly increasing.

4 – The first LEGO set to include a mynock

The Millennium Falcon is a popular choice of subject matter for LEGO Star Wars, but it’s typically accompanied by minifigures rather than alien creatures. 75192 mixed that up a little by including a brick-built mynock – a flying creature encountered in the Empire Strikes Back.

Despite being one of the first aliens to appear in the franchise, this was the first LEGO set to feature a mynock – making it ideal for fans of The Empire Strikes Back. Sadly, only one was included with 75192 Millennium Falcon, although a second was included in 75245 Star Wars Advent Calendar two years later. Ironically, the Falcon itself was absent here.

Unsurprisingly, the vast majority of LEGO sets recreate a specific era of Star Wars. However, the large size of 75192 Millennium Falcon (and ongoing development of the sequel trilogy) demanded a different approach. This set includes characters from both the original and sequel trilogies, giving you significant value for money.

In addition to old and new versions of Han Solo the set includes minifigures of Chewbacca, Princess Leia, C-3PO, Rey, Finn and BB-8. The Falcon itself can also be tweaked to alter its appearance, allowing to appear in either its original or sequel trilogy forms.

There’s even a pair of porgs thrown in: appropriate, as they make their home in the Falcon as the series progresses. The inclusion of such elements help make the Falcon’s high price that little more digestible.

The instruction manual for 75192 Millennium Falcon is worth a read even if you never add the set to your collection. It includes a history of the ship, concept art and in-universe specifications. It also features an interview with the model’s designer, Hans Burkhard Schlomer.

Hans has another role to play in the set’s instructions – showing you how to pick up the finished model properly. The model is so large you need to pick it up in a specific way to avoid breaking it apart. It’s one of the oddest official product shots of a LEGO set ever released, though it’s also one of the most instructive.

Strictly speaking, this is something that 4504 Millennium Falcon could recreate. However, 75192 Millennium Falcon is much more faithful to the source material. Its minifigures are better printed, and its two interior sections are relatively cramped – capturing the romantic tension between the two of them better than prior Falcons’ more open interior layout. (It’s also the first time it’s been depicted in official product images.)

If these innovations have dispelled your last lingering doubts, 75192 Millennium Falcon can be grabbed now from LEGO.com. Don’t forget to keep up to date with all our Falcon at Five celebrations by clicking here.