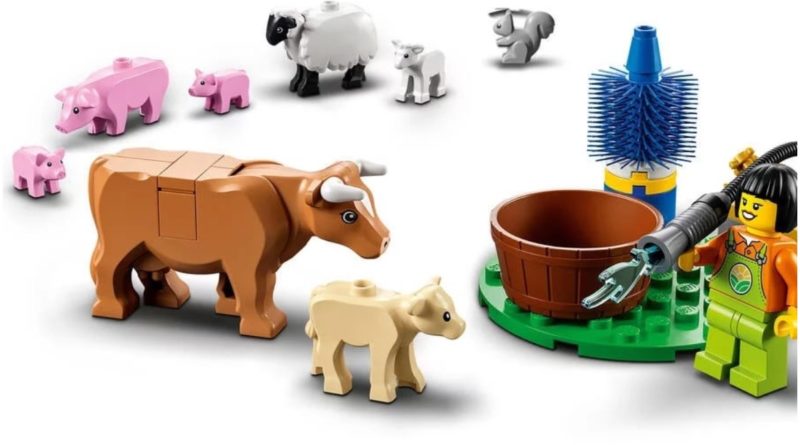 The upcoming LEGO CITY farm sets have plenty to offer both young and old LEGO fans, with a number of new elements to uncover.

A French retailer has just posted several product images of three new LEGO farm sets. Farms have been unexplored in the LEGO CITY line for a while now: the last proper CITY Farm sets appeared in 2010. Since then farm vehicles have popped up sporadically, making these new sets – 60344 Chicken Coop, 60345 Vegetable Delivery Truck and 60346 Farm with Animals – very appealing indeed.

Within this trio of sets are several new features, including:

60330 Hospital introduced a new door assembly, which allows for two doors to placed in a single frame. This naturally has a larger footprint than the standard door frame, and offers new construction possibilities for LEGO buildings.

Not to mention – as it turns out – vehicles. The same doors are used in the rear of 60345 Vegetable Delivery Truck, but they appear here in white rather than transparent blue. As such, these doors could be very useful for plumber’s vans and similar vehicles – especially as this truck’s roof doesn’t appear easy to remove.

Today’s minifigures can eat extremely well, thanks to a wide array of food elements and printed pieces. Now it seems their diet is further expanding. A trio of corn-on-the-cob elements can be seen in the vegetable patch in 60345 Vegetable Delivery Truck.

Fine details are tricky to make out, but these pieces may use yellow painting on a green base element. They also appear to be attached to a new vine piece, suitable for mounting upside-down or right side-up. We anticipate many more organic LEGO builds in the years ahead.

All gardens need a good watering can, and LEGO gardens are apparently no exception. Green watering cans appear in 60345 Vegetable Delivery Truck and 60346 Farm with Animals, allowing you to keep your plants happy.

The watering can isn’t actually a new piece; it seems to have debuted in 43202 The Madrigal House last year. However, this is the first time a minifigure (as opposed to a mini-doll) has made use of it in an official set. Hopefully more Friends tools will make the leap, especially as they offer excellent levels of detail.

Since this is a farm, there’s plenty of LEGO animals to play with. Some of them – like those in 60344 Chicken Coop – depict existing animal elements in new colours. You can now get LEGO chickens in brown, joining the white and beige ones previously available.

However, several baby animals accompany the adult animals in these sets. 60346 Farm with Animals includes new lamb, calf and piglet elements, which should allow for better play scenarios. Goats, however, remain absent from the LEGO lineup at the moment.

A new LEGO sheep can be found in 60346 Farm with Animals, and this might be the most exciting animal yet. Product photos (and the proximity of a farmer with scissors) indicate its wool can be “sheared” off.

The LEGO Minecraft theme has its own sheep, but its ‘shearing’ play feature is rather crude in comparison. This is some particularly innovative parts usage, and makes us hope sheep continue to appear in LEGO sets going forward.

All three of these LEGO CITY sets are scheduled for release on June 1. With luck, we’ll have details of international pricing before too long.