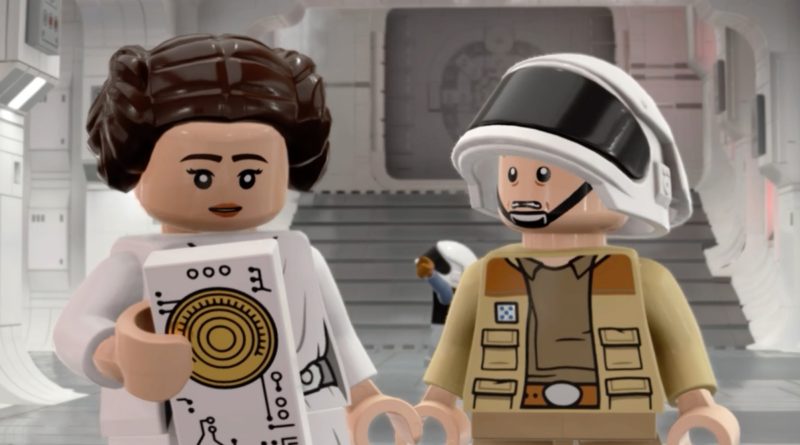 From the return of Beach Troopers to the newfound violence of C-3PO, here are five things we learned from LEGO Star Wars: The Skywalker Saga’s first level.

That’s perhaps a bit of a misnomer, because LEGO Star Wars: The Skywalker Saga doesn’t have a typical first level in the same way as previous LEGO video games: you can jump into any one of its three trilogies when you load up the game for the first time, starting with either The Phantom Menace, A New Hope or The Force Awakens.

For as much as you can call any of those ‘first’, though, it has to be Princess Leia and Captain Antilles getting the Death Star plans off the Tantive IV in A New Hope’s frantic opening scenes. It’s the sequence that first introduced cinemagoers to a galaxy far, far away 45 years ago (even if it isn’t the first level we played in LEGO form), and the first one we’ve had the opportunity to see in full from the new game.

You can read about our experiences of playing the game by clicking here, but for now, scroll down for five key takeaways from the first level of A New Hope in LEGO Star Wars: The Skywalker Saga.

Just like in the movie, one of the very first things you’ll see in LEGO Star Wars: The Skywalker Saga is a protocol droid and an astromech droid wandering the halls of Tantive IV. But wait! Those don’t look like the same droids we all know and love. No need to adjust the colour settings on your TV: a moment later, this poor duo are crushed by debris, before C-3PO and R2-D2 wander into view.

It’s a genuinely laugh-out-loud moment that (hopefully) sets the tone for the entire game ahead. LEGO Star Wars is back, and so too is its trademark visual humour.

4 – You can shoot off Stormtroopers’ helmets

Stormtroopers (and other enemies) have health bars now, which makes taking them down a little more involved than in previous LEGO Star Wars games. But if you’ve seen any trailers or footage from The Skywalker Saga already, that isn’t news. What is news is that if you shoot them enough times, you can cause Stormtroopers’ helmets to pop off, revealing the poor grunt underneath.

You know, right before you blast them completely to kingdom come.

3 – The game is packed with original voice work

Yes, LEGO Star Wars: The Skywalker Saga – like every video game since LEGO Batman 2: DC Super Heroes – features voice acting, although you can switch it off with mumble mode. But like 2016’s LEGO Star Wars: The Force Awakens, it also goes beyond copying and pasting the movie dialogue with plenty of original voice work, a lot of which you’ll experience in the first 10 minutes of the game.

Just adding in extra lines is no easy task, though: any new dialogue has to carefully straddle the line between staying authentic to the character, and seamlessly fitting the tone of the LEGO video games. In the limited gameplay we saw, TT Games has (so far) ticked that box. (Leia’s biting response to Ackbar informing her of the Tantive IV’s boarding party springs to mind, but we won’t spoil it here.)

2 – Beach Troopers are back

1 – C-3PO is way more violent than before

Not only is C-3PO now a genuinely sound choice for getting around – TT Games has given him the mobility of a regular character, rather than the slow, lumbering movement he was squandered with in the original LEGO Star Wars games – but The Skywalker Saga turns him into a relentless killing machine, too.

At one stage in the game’s first level, you’ll need to access a room full of Stormtroopers. Fortunately for us, baddies will generally ignore droid characters, considering them to be no threat. Unfortunately for them, that leaves C-3PO free to access a remote turret and wipe them all out in seconds. He’s programmed for destruction, not etiquette.