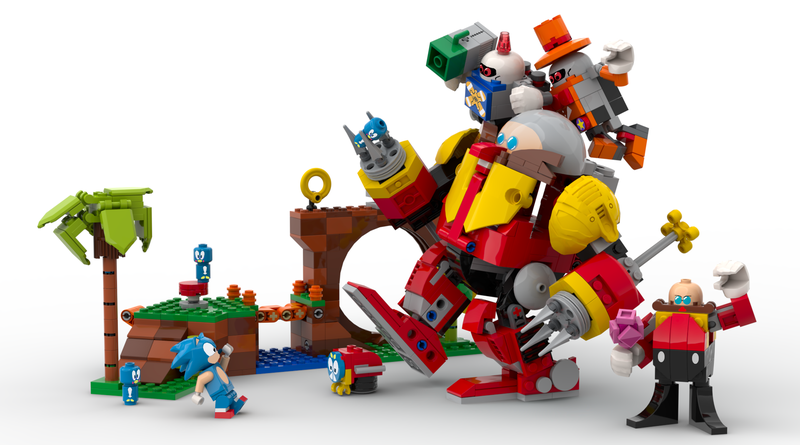 Sonic the Hedgehog will soon be seeing his own LEGO set, so here are five things we learned about the upcoming Ideas model from the Bits N’ Bricks podcast.

As a result of the most recent LEGO Ideas review, it was revealed that Sonic the Hedgehog would be getting the LEGO set treatment and to support the announcement, the latest episode of the LEGO Games podcast focuses on the upcoming model.

Included in the episode are interviews with the designer, original creator of the LEGO Ideas project and a member of SEGA, revealing some potential insight into the set. Here are five things we learned about the LEGO Sonic Mania model’s development, pitch and more.

5 – The designer of the official set

LEGO Ideas designers have a special role to play in making the theme’s sets, with them being tasked to realise the original vision of the fan designer while transforming the build into something that reaches the LEGO Group’s high standards.

For a property as recognisable as Sonic, the one chosen to recreate the Green Hill Zone in bricks was Samuel Johnson, who volunteered for the role. Samuel has been one of the minds behind other LEGO Ideas builds such as 21322 Pirates of Barracuda Bay and 21323 Grand Piano.

4 – The branch of SEGA that is helping with development

Early in the episode, Samuel mentions that there has already been plenty of dialogue with SEGA Europe to help bring their vision into the final product.

3 –The amount of involvement that the fan designer has

The LEGO Group has been in a good number of conversations with Viv Grannell, the fan designer who brought the original project to life.

As part of these conversations, she was asked whether a physical build of the set had been attempted, as some LEGO Ideas projects are created with digital software. To the LEGO Group’s surprise, parts of the model were already sitting on her desk, including the brick-built figure of Doctor Eggman. Any other details into these conversations were kept quiet.

2 – The original pitch to SEGA

Before the Sonic the Hedgehog project was decided on by the LEGO Ideas judges, they needed the permission and help of SEGA as the owner of the character. A pitch was prepared to convince the team to go ahead with Viv’s idea, with one specific aspect convincing the company of the partnership.

As revealed by Jon Choon, Marketing Director at the company, the team was taken aback by the details and special touches that were in the fan submission, all of which were thanks to Viv. It’s entirely possible that without her passion, the project would have never been greenlit.

1 – The potential future of LEGO Sonic the Hedgehog

While the upcoming LEGO Ideas set is undoubtedly exciting for fans, Jon Choon did give potential insight into what might come next for the LEGO Group and the blue blur. When asked what elements of Sonic he would like to appear in this or future sets Jon Choon responded that he’d like to see more characters, referencing the rest of the Sonic universe.

The Director of Marketing’s hopes might echo with many fans, with other iconic Sonic characters such as Tails, Knuckles and Amy yet to be realised in minifigures. Maybe one day other characters can get their moment in the spotlight, but in the meantime, here are five other zones that could make for some great Sonic Mania models.