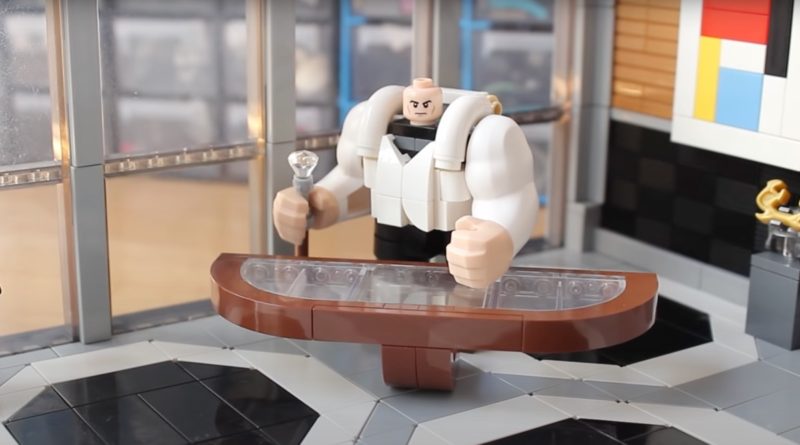 The LEGO Group has yet to give us a Kingpin minifigure, so here’s five different ways to build the classic Marvel villain in bricks.

The intimidating and inimitable Wilson Fisk made his Marvel Cinematic Universe debut in last year’s Disney+ series Hawkeye, which saw Vincent D’Onofrio reprise his role from Netflix’s Daredevil. To date, though, we haven’t had a single official LEGO interpretation of the crime boss.

And given no sets or minifigures from Hawkeye seem to be forthcoming any time soon, it’s up to the fan community to plug the gap. Fortunately, there are already plenty of different options and ideas out there for how to realise Kingpin in bricks, whether as a traditional minifigure, a brick-built bigfig or somewhere in between.

If you’re keen to put together your own Kingpin to take on LEGO Daredevil or Spider-Man (both of whom you can pick up in 76178 Daily Bugle), here’s some inspiration from across the web…

As a regular minifigure

LEGO YouTuber MiniSuperHeroesToday has put his own spin on this design from Instagram user _lego.jade_, which uses Joker’s torso and legs from 71026 DC Super Heroes Collectible Minifigures. The white hands have been swapped out for light nougat, while the head comes from an Atlantean guard in 2017’s Justice League set 76085 Battle of Atlantis.

The snarling expression feels pretty fitting, but given it’s a double-sided head that doesn’t need a hairpiece, _lego.jade_’s original Lex Luthor head would make for a more versatile minifigure. Of course, Kingpin is typically depicted as much, much larger than other characters, so you might want to dream a little bigger in LEGO, too…

As a larger minifigure

The LEGO Group doesn’t often venture beyond its standard wheelhouse of regular minifigures and moulded bigfigs, but some licensed characters do occupy that space in between, and therefore demand one-off designs – such as Harry Potter’s Rubeus Hagrid, who combines specialised torso and arm pieces with a regular minifigure head and legs.

Instagram user top_lego_creator has mocked up what that piece might look like repurposed for Kingpin, and while Hagrid’s overcoat doesn’t quite match the shape of Fisk’s suit, it’s a reasonable alternative. Of course, the major obstacle is that this isn’t a figure you can easily create using existing parts, although m1n1_br1ck appears to have had a go at repainting Hagrid with pretty good results.

As a brick-built character

If you want to give Kingpin his due in LEGO, the best way to go – at least in lieu of a dedicated bigfig, as he was represented by in the LEGO Marvel Super Heroes video games – is building him from bricks. There are plenty of takes on Wilson Fisk at this scale across Instagram and YouTube, including this one from coosey_goosey_bricks.

Inspired by 2018’s seminal Spider-Man: Into the Spider-Verse, this interpretation of Kingpin incorporates a minifigure head and bigfig hands, combining classic LEGO DNA with a brick-built body to really communicate the character’s overwhelming and imposing size. You’ll find free instructions for coosey_goosey_bricks’ build over on their Instagram page.

YouTuber hachiroku24’s brick-built bigfig, meanwhile, takes inspiration from the comic books with a classic white jacket and cane. It uses the same Lex Luthor head, but adds more organic curves – reflective of its source material – and relies on bigfig arms as well as hands.

It’s also part of a larger build that sees the crime lord take on Daredevil and Spider-Man, and it looks especially effective in that setting. Check the entire thing out (including how to build Kingpin) by hitting play on the video above.

Finally, this build by Instagram user thatlegoguywastaken uses the same head and arms as hachiroku24’s build, but combines them in a way that offers a little more articulation and expression. It’s also a clever way of manipulating that particular wedge piece to trick the eye into seeing a suit jacket, while the overall proportions feel spot on.

Any one of these LEGO Kingpin characters would segue nicely into a Marvel minifigure collection, or sit right at home in a Daredevil- or Spider-Man-focused build – at least until the LEGO Group gives us an official version. And even then, who’s to say it will be as good as any of these smart and resourceful custom builds…