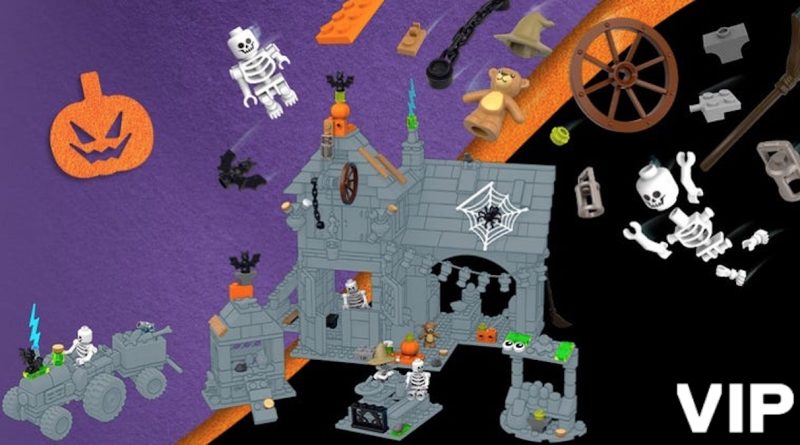 The current LEGO VIP add on pack is perfect for the spooky season and these five sets are just as perfect for a Halloween re-theme.

As depicted on the promotional artwork for the two LEGO VIP add on packs that have been widely released so far, the idea behind them is to customise another model with them, applying a Pirate or Halloween skin to the set. The advertisements for the pirate and Halloween packs use 60262 Passenger Airplane and 41721 Organic Farm respectively. The pack is currently free with purchases on LEGO.com over £50 / $50 / €50 made by VIP members.

We’ve already seen one redesign for 21335 Motorised Lighthouse using the pirate pack to give you an idea of how you could personalise any build to the theme of the Halloween GWP. Here are four sets that could work well with 40513 Halloween VIP Add On Pack, and don’t forget that 40562 Mystic Witch is still available with qualifying orders too.

One of the most recognisable LEGO for Adults models, 10281 Bonsai Tree, has been proven to suit a spooky redesign and 40513 Halloween VIP Add On Pack can get you well on your way to a similar look by hanging bones in the branches and adding a pumpkin patch to the base.

LEGO Marvel’s 76218 Sanctum Sanctorum could also work well as a base for Halloween decorations, as any modular building would. However, the magical nature of the Marvel Studios sets offers an excuse for floating spiders, skeletons and all kinds of strange adornments to the exterior. Perhaps Doctor Strange is being creative this Halloween season.

You’ve probably heard of a Christmas Tree, but a Halloween Tree could be an interesting take on the traditional decoration. Take this set and replace the baubles, stars and candles with lanterns, spiders and bats and you’ll have a unique Halloween decoration for the spooky season.

Released earlier this year, 10303 Loop Coaster is one of the biggest LEGO roller coasters ever made. Using 40513 Halloween VIP Add On Pack, you can give this ride a haunted re-theme with a few more scares than the minifigures riding it may be expecting. You may even be tempted to rig up manual moving features to have skeletons jump out at riders, and don’t forget to decorate the queue line too.