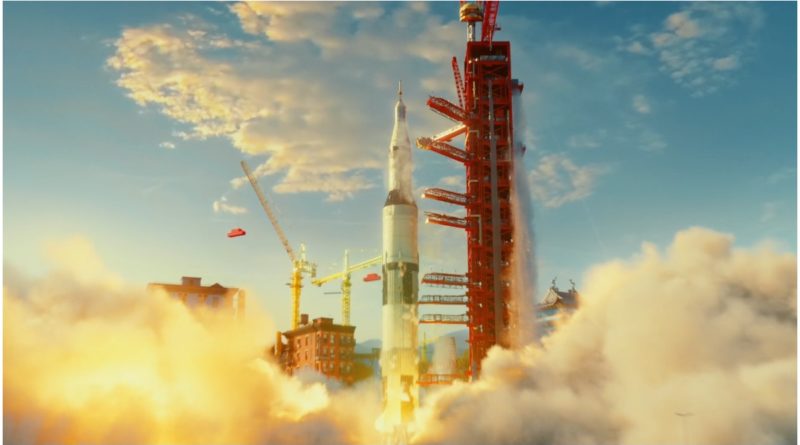 The LEGO Group’s new video shines a spotlight on a number of potential Christmas presents, and we’ve spotted some subtle nods to LEGO history as well.

Videos in the Rebuild the World campaign (like this one, and this one) blend real-world scenarios with references to LEGO characters and elements. Some references are obvious, but others reach a little further into the LEGO product range. We’ve spotted some neat nods in the most recent LEGO advert (which we discuss here) that you might have overlooked.

The reference to 60302 Wildlife Rescue Operation is obvious – it’s at the start of the video, and its beige and red colour scheme is striking. However, there also seems to be a nod to 77944 Fire Station Headquarters. The fire engine accompanying the dragon is similar in structure to the engine that appears in this model. What’s especially interesting is that this fire station is only available in the UK, as part of a short-lived pilot program.

Another reference appears to be made to 60285 Sports Car; its sleek shape and bright blue colour scheme are immediately recognisable. Look out for it as it hitches to 31119 Ferris Wheel. 60285 is another short-lived model; it’s due to leave shelves by the end of 2021. Given that 77944 and 60285 are both solid sets, now might be the time to grab them if you can.

A woman in a wheelchair during the dance party seems inspired by 60154 Bus Station. While this set has long been retired, it’s still encouraging to see nods to people with disabilities across LEGO products and marketing.

This new augmented reality theme has had a rocky start, with some mixed responses to its current incarnation. However, many sets in the range are still available and various elements of the theme appear in this new LEGO video.

LEGO character L.L.A.M.A. can be seen spinning some records, with 43115 The Boombox glimpsed behind him. The dancing construction workers are joined by a keytarist, with the instrument from 43101 Alien Keytarist in clear view.

Both the Boombox and the newest wave of Bandmates are available at LEGO.com. However, since the Bandmates come in boxes (and are only available online) getting a specific one has proved rather difficult through official channels.

Even if they’re discontinued, LEGO Collectible Minifigures are frequent stars of recent LEGO adverts. A version of the Cabaret Singer for Series 21 joins the dance party, as does Series 17’s Strongman – who is rescued from the flaming castle. Series 19’s Shower Guy can be seen floating in space at the end, too.

Even if some minifigures are missing, their accessories are not. The Yuppie’s giant mobile phone is used by one dancer, and the inflatable duck (used by minifigures like Vacation Batman) can be seen in the castle. Eagle-eyed fans can even spot a Black Falcon shield – one of the oldest factions in the Castle theme, and a recent star of sets like 21325 Medieval Blacksmith.

You surely spotted the reference to 76193 The Guardians’ Ship, and 92176 NASA Apollo Saturn V blasts off at the end as well. This rerelease of a 2017 set has won a broad fanbase, and is sticking around until the end of 2022.

However, we can also see references to 10264 Corner Garage and 10182 Cafe Corner accompanying these. The Jo’s Garage sign is clearly visible on the building to the left of the Benatar, and the hotel sign from Cafe corner is in the background of the Saturn V’s launch site. While Cafe Corner has long been out of stock, a rumoured modular hotel could be just what you’re looking for.