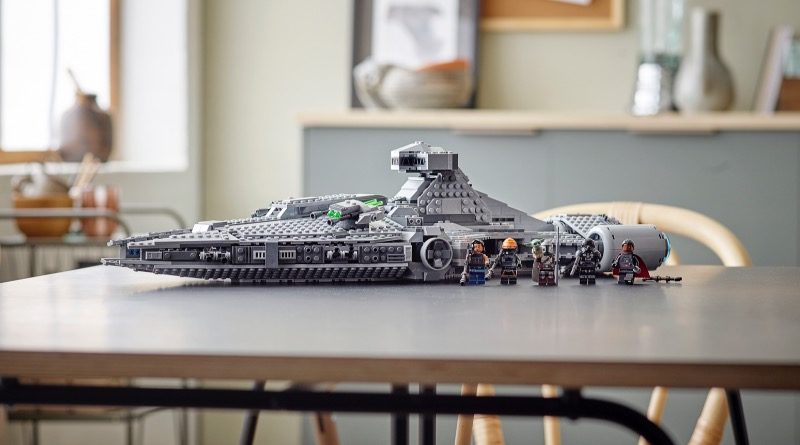 The LEGO Star Wars designers have revealed why they omitted Luke Skywalker from this summer’s flagship The Mandalorian set, 75315 Imperial Light Cruiser.

Officially revealed at LEGO CON over the weekend, 75315 Imperial Light Cruiser focuses on the finale to The Mandalorian’s second season, Chapter 16: The Rescue. And in doing so, it hits most of the major character beats from that episode, assembling a full cast of Mando, Baby Yoda, Cara Dune, Fennec Shand, Moff Gideon and even a Dark Trooper.

As you’ll know if you’ve seen that episode, though, there’s one major Star Wars character missing from the line-up: Luke Skywalker, who swooped in at the last moment to save our heroes from those unrelenting and seemingly unstoppable Dark Troopers.

Speaking to Brick Fanatics at this year’s LEGO Fan Media event, the LEGO Star Wars designers revealed that there’s a very good reason why Luke isn’t in the set: they had no idea he was even going to appear in the show.

“That’s something that they were keeping [secret],” says Creative Lead Jens Kronvold Frederiksen. “That’s also the reason why none of the toy manufacturers were able to deliver a product of The Child before [the show aired]. It was simply because [Disney and Lucasfilm] don’t share anything, because there’s such a high risk that it’s going to be a spoiler. That’s just how it is.”

Design Manager Michael Lee Stockwell also explained that the secrecy around the show’s finer details can have a huge impact on the wider assortment, as the design team figures out how best to maximise the potential minifigures across any given wave of LEGO Star Wars sets.

“Sometimes we’ll receive reference on a vehicle, but until we really know which characters are going to be associated with the vehicle, it’s difficult to decide whether or not we should commit to that vehicle,” Michael says. “So it takes a while before all the pieces fall into place, and we know whether or not we can go with one design or another.

“It’s not as though on such and such a date, they deliver all the material we need. It just drips like a faucet, a few pieces every week, and we gradually build enough information that we can put the assortment together. And believe me, we don’t know nearly as much as some people think we do in the early stages. It takes some time before all the pieces come falling into place.”

While you’ll need to add your own Luke Skywalker minifigure to 75315 Imperial Light Cruiser when it launches on August 1, it’s not as if we’ve been particularly short on them over the years. And as luck would have it, you can actually grab a Return of the Jedi version right now in 75302 Imperial Shuttle.