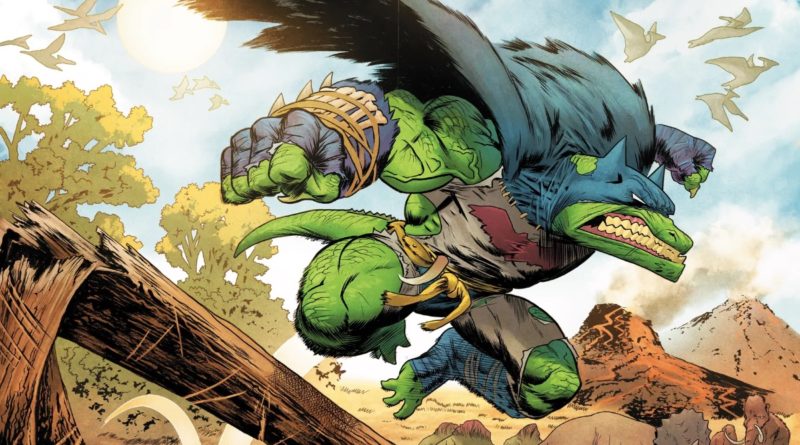 DC Comics has announced a new miniseries titled ‘Jurassic League’, and it could bring us the best LEGO DC characters to date.

That’s if the LEGO Group ever properly returns to DC sets based on the comics, but if there’s a time to do it, it’s now. Jurassic League casts the entire Justice League as anthropomorphic dinosaurs, which is exactly the kind of insanity that comic books do so well. Artist Juan Gedeon’s quote to Polygon sums it up pretty well: “I didn’t know if it was a good idea or not. I just knew I wanted to draw these creatures.”

Batman is an allosaurus; Superman is a brachiosaurus; and Wonder Woman is a triceratops. Gedeon and writer Daniel Warren Johnson are the minds behind the madness, which will debut in May as a six-issue miniseries. You can check out some of the preview artwork below, courtesy of Polygon and DC Comics.

Johnson and Gedeon have put some serious thought into the dino versions of each of these characters, too – Joker is a dilophosaurus because he’s ‘crazy, sneaky, colourful, unpredictable and dangerous’, while Superman is a herbivore because ‘he only fights if there’s no other option’. Here’s the official synopsis from DC Comics:

“You know the story: an infant escapes the destruction of its home planet and is deposited on Earth to be raised by human parents. A goddess from a lost city defends truth. A Theropod dons the visage of a bat to strike fear into evildoers’ hearts. This heroic trinity, alongside a league of other super-powered dinosaurs, join forces to save a prehistoric Earth from the sinister machinations of Darkseid.

“Wait… what? Okay, maybe you don’t know the story. So join us and bear witness to a brand-new – yet older than time – adventure and experience the Justice League as you have never seen them before!”

The last proper LEGO DC Super Heroes set not based on a movie was April 2021’s 76180 Batman vs. The Joker: Batmobile Chase, and before that the summer 2020 mini-wave of three so-so sets. But in lieu of a DC slate that’s as packed as Marvel’s – particularly with family-friendly properties – the LEGO Group could do gangbusters by returning to the franchise’s comic roots.

More specifically, its prehistoric roots. The company clearly already does big money with dinos – how else to explain the consistent and continued line-up of Jurassic World sets? – so LEGO Jurassic League feels like the next evolutionary step. Let’s hope life, uh, finds a way…