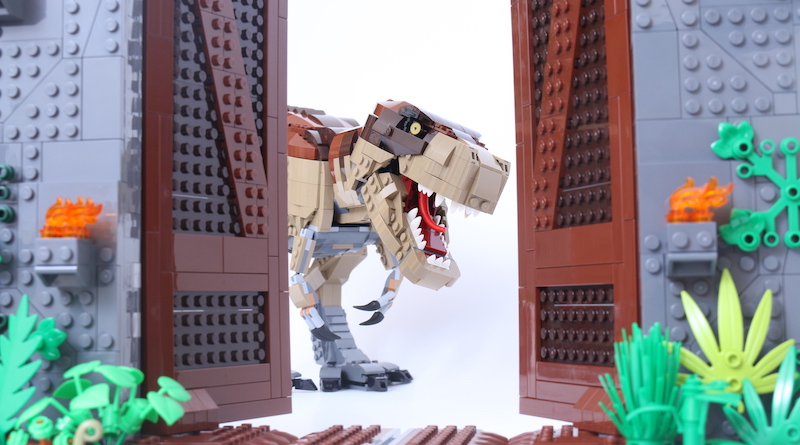 It has been a year packed with substantially-sized set releases from the LEGO Group, with it remarkable to consider what large-scale models we have already welcomed during the 10 months of 2019 so far. Right from January 1’s release of 42096 Porsche 911 RSR, this year has seen 70840 Welcome to Apocalypseburg!, 42100 Liebherr R 9800, 75252 Imperial Star Destroyer, 21318 Tree House, 42110 Land Rover Defender, 42098 Car Transporter, 10265 Ford Mustang, 75244 Tantive IV, 70839 The Rexcelsior!, 75810 The Upside Down and 71044 Disney Train and Station. Alongside these have released 21046 Empire State Building, 75255 Yoda, 10264 Corner Garage, 70425 Newbury Haunted High School and two entries from BrickLink’s AFOL Designer Program – all above 1,400 pieces, all highly detailed masterclasses in what is possible with the brick, across different themes and at different scales.

Almost all of the Direct to Consumer releases (D2C) from the sets listed above have been welcomed to wildly positive reviews. After all, we all love LEGO, and these are the culmination of what designers can create without the limitations of a budget, and serve to demonstrate just how that creativity can venture into new ground for a theme or license.

There is one set, though, also released in 2019 and very much part of the D2C line that was initially met more with a mixed reception from fans – 75936 Jurassic Park: T. rex Rampage. Coming in at 3,120 pieces, 75936 centres around the LEGO Group’s largest ever built dinosaur, both in piece count and physical size, the Tyrannosaurus Rex from the original 1993 Jurassic Park film. Capable of standing well above 25cm and coming in at 69cm long and 14cm wide, this is a dinosaur purposefully built for imposing display, to overshadow the rest of your Jurassic World and Jurassic Park LEGO collection, as only the iconic T-rex should. It is paired with the instantly recognisable and just-as-massively-built Jurassic Park gates, and six minifigures, four of whom are exclusive, including John Hammond, Dennis Nedry complete with a Dilophosaurus venom attack face and a bare-chested Jeff Goldblum. 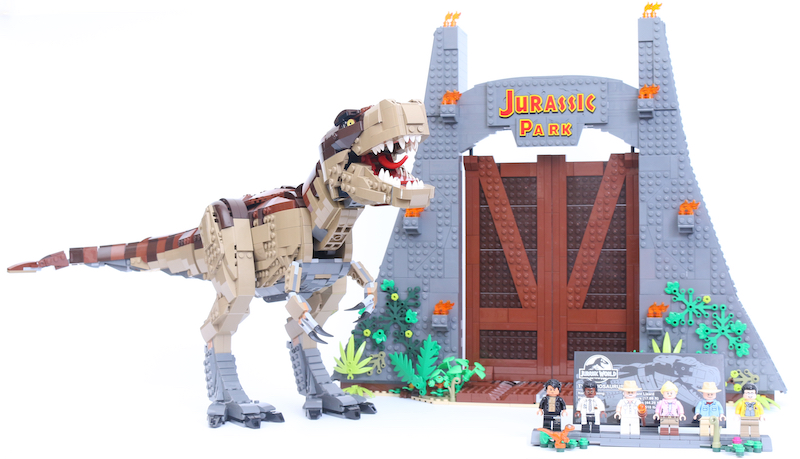 What’s not to love? With all that to consider, most reviews have agreed – this is an ultimate set for the Jurassic Park/World line, bringing something new to the build table at an immense scale. For some, though, there was initial disappointment at the set’s announcement – hope had been put in false rumours of a visitors’ centre being released, and for others, there was confusion over the rejection by the LEGO IDEAS team of similar proposals on their platform (a press release was presented in tandem with 75936’s announcement, followed by IDEAS’ further clarification on the wider issue a few months later). Discussion (perhaps filling the void left by the unusual lack of announcement-day product reviews – the LEGO Group inadvertently goofed this one, overlooking shipping out advance review copies to Recognised LEGO Fan Media), once it circled back on to the actual set, focused on the chosen scale for the T-rex and gate – had the LEGO Group actually gone too big?

Well, yes and no. This isn’t the set for those hoping for a brick-built playable dinosaur, or something to more accurately fit into minifigure scale – you’d be better served with the rest of the Jurassic Park and Jurassic World line…which in itself almost answers why 75936 hasn’t been designed for playability or minifigure scale – because everything else in the IP, across 18 System sets, has been already. 75936 scales up the building to bring forward something new. 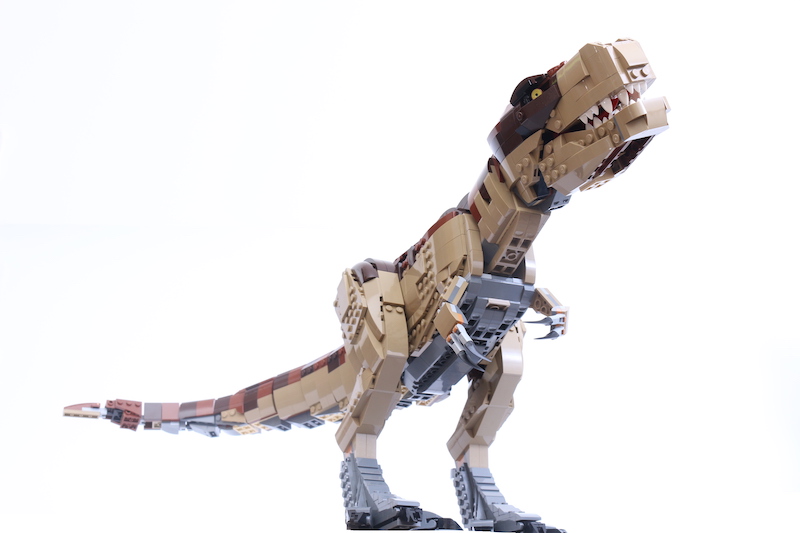 It’s a build that shouldn’t be compared to the rest of the Jurassic line – it serves a different function, perhaps for a different kind of LEGO fan. The completist will always be here, as too the avid Jurassic Park fan, as this ticks so many nostalgic boxes, thanks in part to those minifigures, and also those little vignettes built into the back side of the gate. But this set also appeals to the more mature LEGO fan, able to appreciate the artistry of large-scale building, interested in what a LEGO model like this can offer on display, more so than in play.

The aforementioned minifigures and vignettes offer a level of physical interactivity with the set – as does the gate-opening function and articulation in the T-rex’s arms, mouth, neck, hips and along the tail – but for the most part, this is something designed for prime real estate in your house or office. On display it is imposing both in size and colour, dominating the eyeline – it’s a beast of a set and it acts like one. As I wrote about in Issue 9 of Brick Fanatics Magazine, where we gave this set the front cover and an in-depth designer walkthrough feature with Mark Stafford, the first time that Graham and I saw it was in person at May’s LEGO Fan Media days in Billund. Sat just behind Mark, it immediately caught our eyes and, as we were preparing for a day of interviews, we completely lost focus, becoming those 10-year-old boys once more in love with dinosaurs and in awe at what could be built out of LEGO. It is ridiculously impressive and there are few sets I can recall over the years that have had that same punch of a first impression in person. As we were sitting down to talk Stranger Things with Justin Ramsden, we just had Jurassic Park on the mind… 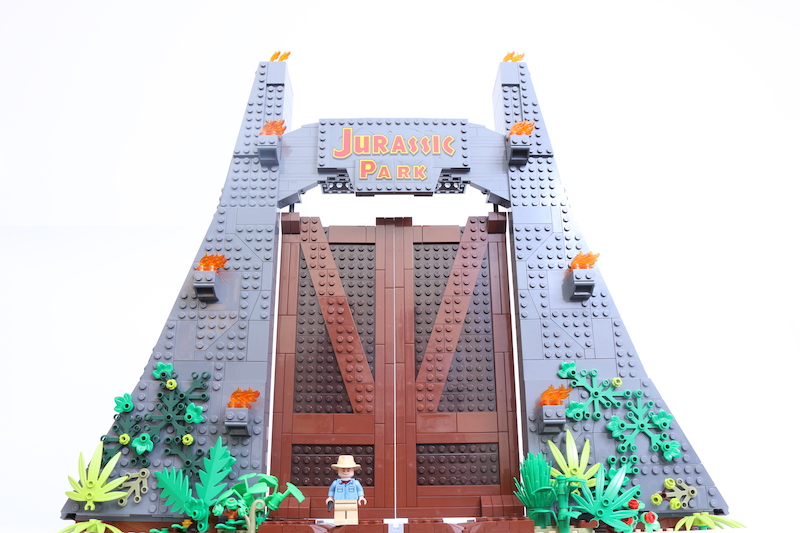 More so than most other sets, it’s important to experience this one in person, for the visual impact that it has, and indeed for the fact that the box art really does it a disservice – anyone truly on the fence about purchasing need only make the effort to catch a look in person in store to fully appreciate its grandeur. For everything about it from its colour scheme to the more intricate build details, this is a set that radiates filmic tones, at an epic scale. The gate is a marvelous design that perfectly complements the dinosaur, but, it’s very much for the background as you can’t help but scan the T-rex. Your eyes are drawn to the rows of teeth lining a huge mouth, to the eyes that have been cleverly angled and indented into the head, and then right along its thick neck and body that seamlessly transitions to a long, winding tail.

From the first time watching Jurassic Park, the scenes leading up to and then revealing the T-rex are standout in a film packed with iconic moments, scenes, characters and action. From building up anticipation to delivering with scale, noise and terror, the T-rex was the star of Jurassic Park, and all the spirit of awesome that Steve Spielberg and his team created in designing and filming it is wonderfully captured in 75936 Jurassic Park: T. rex Rampage.

The LEGO Group will already be aware of how they lost control of the conversation around this set when it announced and how the resulting conversation drew focus away from the set itself. Whether or not on time product reviews would have given the LEGO set enough breathing room to be objectively discussed outside of audience disappointment at rumours and confusion over IDEAS’ terms is an unknown. What is clear, though, is that beyond wider issues that this set may have inadvertently highlighted, the set itself is worth separate consideration all the same. And it’s a pertinent point to make in conclusion. Consider this set on its own, because there’s nothing else like it. Do that and you won’t be disappointed.

LEGO Senior Model Designer Mark Stafford speaks to brickfanatics.com Brick Fanatics Magazine about the challenges faced and details that went into designing the T-rex for 75936 Jurassic Park: T. rex Rampage at this scale…

…and also revealed a few extra details in further conversation with us, including how inspiration struck one day in the shower.

Issue 9 of Brick Fanatics Magazine features more exclusive insight from Mark Stafford, alongside some eye-catching photography of this gigantic dinosaur. 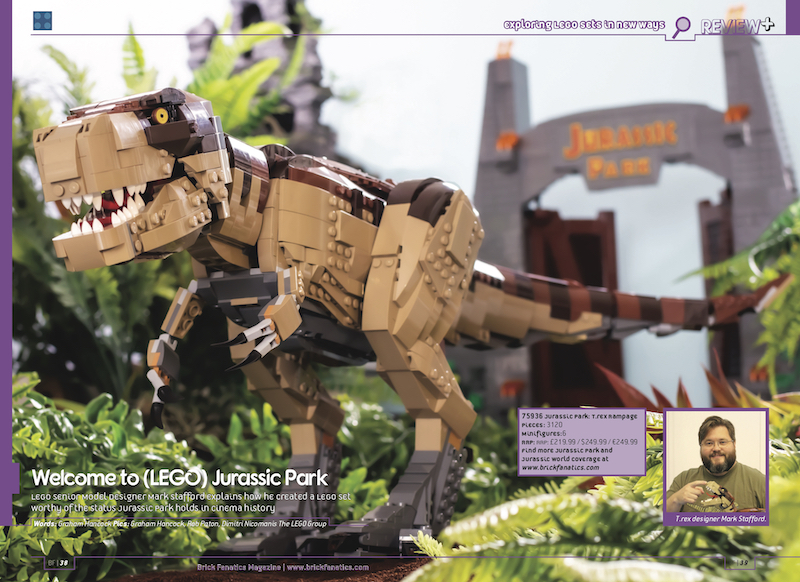