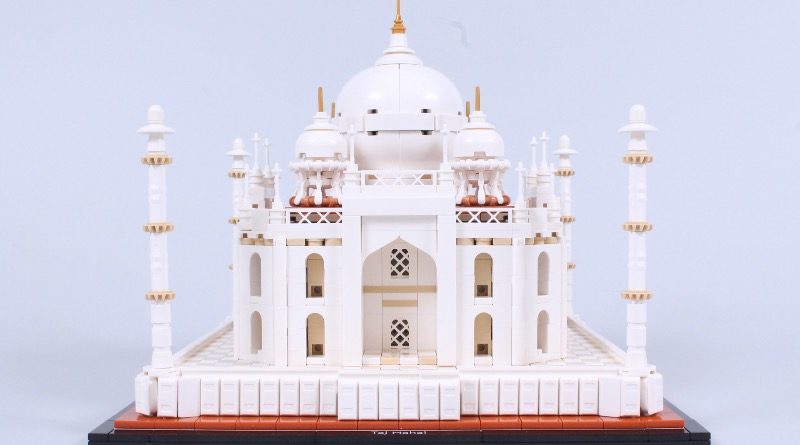 The LEGO Group scales down one of the seven wonders of the world into a more accessible, space-friendly set for 21056 Taj Mahal – but is it any more exciting to build?

We’ve already seen one enormous brick-built version of India’s marble mausoleum, deemed so good by the LEGO Group that it released it twice: first in 2008, then again in 2017, with a different product name but no other changes to speak of.

Anyone who’s spent any amount of time putting together that 5,922-piece set will tell you that it actually felt perilously close to the 21 years spent constructing the real-life Taj Mahal in the mid-1600s. That’s mainly by virtue of the subject matter, but choosing to adapt it at Creator Expert scale perhaps wasn’t the wisest decision.

Now – as it has done with so many other monuments – the LEGO Group has miniaturised the mausoleum even further for 21056 Taj Mahal, and in doing so, will hopefully solve its bigger brother’s biggest problem.

There are plenty of reasons to want to own a model of the Taj Mahal. Housed in the Indian city of Agra and originally commissioned by Mughal emperor Shah Jahan in 1632 as a tomb for his third wife, Mumtaz Mahal, the massive, marble monument is a shining symbol of its country’s culture and heritage.

But even beyond the historical significance it carries – and its status as one of the seven wonders of the world – the Taj Mahal is also hailed as one of (if not the) greatest examples of Mughal architecture ever created. That’s not a type of construction frequently seen in the LEGO line-up, even within the Architecture theme itself.

It’s predominantly for that reason that 21056 Taj Mahal stands out among the recent line-up of LEGO landmarks, which have mostly focused on examples of western design in 21045 Trafalgar Square, 21046 Empire State Building and 21054 The White House. And that sentiment is carried through to the build, which is distinct in that portfolio for good and bad.

First, the good: the Taj Mahal is far better suited to Architecture scale than Creator Expert in terms of aesthetics alone, with the existing part palette lending itself well to the spheres, towers and spires that define the Mughal style.

From the ski poles that represent the guldastas (or spires, technically pre-Mughal) to the gears that act as balconies on the four corner minarets, the model is littered with parts that – if you were coming to LEGO for the first time – would feel purposefully-designed for their specific applications here.

Some areas of the model are more specifically representative than others: the droid arms employed by the four domed kiosks that sit to the corners of the main onion dome feel like more of an artistic interpretation, while there was obviously no chance of recreating the detailed calligraphy that adorns the real-life Taj Mahal.

Still, this is a LEGO model, and for the qualities that any LEGO representation of the Taj Mahal should have at this scale, the finished display piece is a resounding success. The colours are more accurate than in the Creator Expert model, wisely eschewing that set’s odd blue baseplates; it looks far smoother, cleaner and even sturdier than its bigger brother; and it’s perhaps also the first Architecture set with a hint of interactivity.

Lift the roof off the Taj Mahal, and inside you’ll find a removable central chamber, beneath which sits the main tomb holding the bodies of both Mumtaz Mahal and Shah Jahan. Designer Rok Zgalin Kobe explains in the instructions that this feature is intended to replicate the ‘story’ of the Taj Mahal in LEGO bricks, and that it does – even if it’s a rather morbid tale to tell.

So, the bad we mentioned earlier? Well, unfortunately it’s pretty much all based around the same construction problems that afflicted 10189 Taj Mahal, in that you just can’t avoid the repetition any model of Mughal architecture – which is symmetrical by nature – would entail.

It’s less burdensome here, of course, because you’re dealing with a set only a third of the size (in both price and part count). But aligning all those 1×1 tiles is a crash course in why LEGO Art opts for round tiles; carefully arranging the ingots around the base to ensure the LEGO logo sits at the same end will make you question your life choices; and seeing a ‘2x’, ‘8x’ or even ‘33x’ symbol at almost every step of the way is more than a little disheartening.

The most egregious moments come in bags six and seven of the 10 total, which build the four corners of the main structure. Bag six asks you to put together a surprisingly involved and intricate sub-assembly, employing Architecture’s penchant for fascinating construction techniques – then commands you to do it all over again. Which would be fine, probably, if not for the fact that you know bag seven is just going to ask you to do it twice more.

It’s undeniably the most laborious part of the build, and perhaps the best argument for why the LEGO Group has otherwise mostly shied away from Mughal architecture until now. But where the 2008 model feels very much of its time in both build and aesthetics, the reward for completing 21056 Taj Mahal is at least a much more accomplished and satisfying display piece.

As you can probably guess from their name, Architecture sets focus on – well, architecture. And that means there are no minifigures included in 21056 Taj Mahal.

While the value may not be immediately felt in the set’s size, however – at least compared to some Architecture sets – you’ll definitely feel it in the build, which sometimes feels like it goes on forever. Plus, it’s nice to have a more accessible version of this wonder of the world than the now-retired 10256 Taj Mahal.

Can 21056 Taj Mahal avoid the repetition that plagued a set three times its size? In short: no. But the size of this scaled-down marble mausoleum does offset it somewhat, primarily because the final model is so much more manageable, but also because the techniques you’ll repeat over and over again are, for the most part, much more interesting.

The result is a weighty display piece that more than justifies its place in the Architecture range, making superb use of the LEGO Group’s existing part palette to realise a more distinct, fine-tuned version of the Taj Mahal than the one that’s recently retired. More importantly, it doesn’t feel like it takes 21 years to build…

Support the work that Brick Fanatics does by ordering your copy of 21056 Taj Mahal (when it launches on June 1!) using any one of our affiliate links.

How long does it take to build LEGO Architecture 21056 Taj Mahal?

You’ll need to set aside approximately two hours to put together 21056 Taj Mahal. It gets fiddly at times, and can even feel like a slog, but power through: the result is worth it.

How many pieces are in LEGO Architecture 21056 Taj Mahal?

How much does LEGO Architecture 21056 Taj Mahal cost?