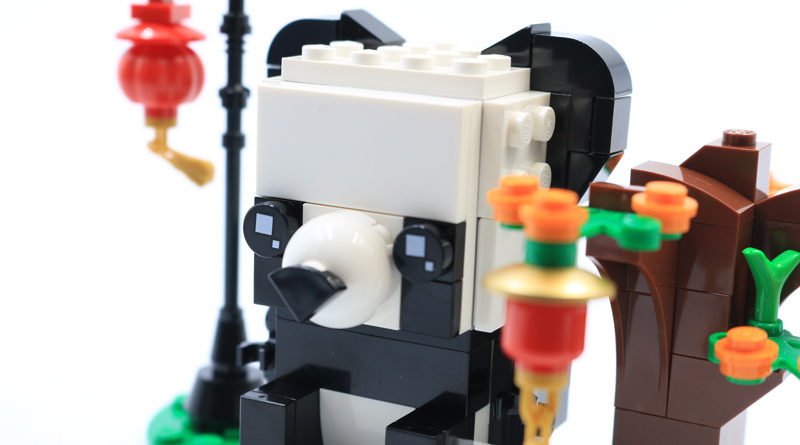 While the LEGO Group has released a number of sets inspired by the Chinese New Year festivities, LEGO BrickHeadz 40466 Chinese New Year Pandas is one of the sweetest – even if 2021 is actually the year of the ox.

In Chinese culture, the panda is a symbol for many things, but the reason the designers probably chose it is because the animal often represents good fortune – and the panda trend isn’t going anywhere any time soon. 40466 Chinese New Year Pandas manages to deliver a panda family that is ‘un-bear-lievably’ cute, and all in an enjoyably quick build.

Pandas naturally have quite a blocky shape, so are well-suited to the BrickHeadz style. This can be seen most distinctly in how the adult’s torso is mainly built up with quite a few 2×4 and 2×2 bricks, so it takes on a recognisable bear shape very quickly. In contrast, little feet are made from 1×2 bricks topped with tiles. As the panda is in a sitting position, many pieces with exposed studs on the side are utilised to achieve the different angles throughout the body. Although it might look quite simple, the techniques used keep this build interesting.

The face adds tiles and plates to a 4×4 plate to recreate the iconic markings of a panda. Symbolically, their black and white fur represents the yin and yang of balance, and the mix of pieces looks perfect, including the particularly inspired use of a white domed brick as a round snout.

Giving the baby pandas different poses makes the build more diverse and keeps things from becoming too repetitive. They’re slightly smaller than the adult, relying on more 3×3 parts. To get one panda lying down, a Technic brick with a hole is incorporated into the back, which can then connect on to the pin in its corresponding stand. Baby pandas are cute anyway, but using 1×1 bowed tiles as tiny ears and giving them little bamboo stalks definitely intensifies their adorable display value.

All three pandas come with their own stands, although the adult panda has one with extra decoration. Roof and arch bricks in brown make the trunk of an orange blossom tree, which unsurprisingly uses orange studs as flowers, and is even dotted with red minifigure-head lanterns.

40466 Chinese New Year Pandas has no minifigures included, but the charm of these monochromatic bears has been captured beautifully. Both the pandas and the Chinese lanterns also represent good luck, so 40466 is symbolically full of positivity.

At first glance, 40466 Chinese New Year Pandas appears to be good value for money. Three figures and matching stands for its price tag seems very reasonable. However, if you do the math, something doesn’t really add up: 40441 Shorthair Cats has 250 pieces and is £13.49/$14.99/€14.99; this set has one piece fewer and yet it costs more. From a price-per-piece perspective its price tag doesn’t quite make sense, and although it’s a great model, it might be worthwhile to wait for a discount.

Whether you celebrate the lunar festival or not, 40466 Chinese New Year Pandas is a wonderful model that is fun to build and looks so cute on display. It would make a perfect ‘good luck’ gift (something we all need in 2021) or as a symbol of strength on your desk as you work from home.