LEGO BrickHeadz 41610 Tactical Batman and Superman has been revealed on the new store calendar.

Another new LEGO BrickHeadz set has been shared, specifically another two pack. Rebelscum has shared images of the LEGO Store May calendar, and it reveals 41610 Tactical Batman and Superman. It looks like the characters are based on their appearance in Justice League, with the set perhaps coming out a little late to capitalise on the film’s success. 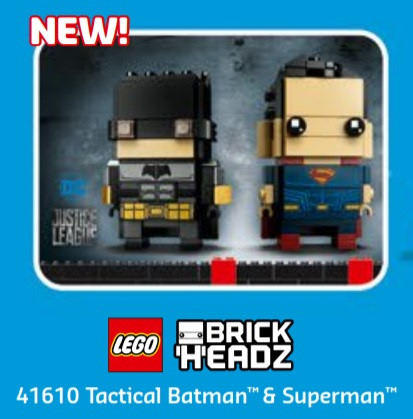 The new set is expected to launch in May, with little activity planned at the LEGO Store other than the May the Fourth weekend. Given the hype that will surround Jurassic World: Fallen Kingdom and Solo: A Star Wars Story, a quiet month is probably welcome.

41610 Tactical Batman and Superman joins a growing LEGO BrickHeadz range, that now includes sets based on Jurassic World: Fallen Kingdom, Incredibles 2 and Back to the Future. Harry Potter is rumoured to be joining the collectible line when the merchandise launches later this year.