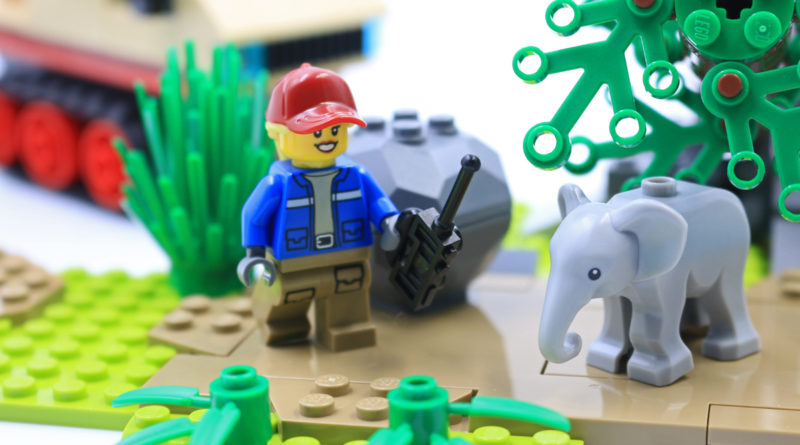 Elephants steal the show in 60302 Wildlife Rescue Operation, but there’s more to this LEGO CITY set than first meets the eye.

Adventuring out onto the savannah to help animals in need, the heroes of LEGO CITY are here to care for all creatures great and small – including the ferocious-looking crocodile. While the monkeys chill out with some bananas at base camp, there’s drama unfolding at the watering hole.

Combining nature, animal rescue, and a brand new crocodile mould in one set, 60302 Wildlife Rescue Operation offers a lot for building and role play. Is it enough to warrant a walk on the wild side with its relatively high price tag?

60302 Wildlife Rescue Operation is the perfect model to build in bitesize chunks as it’s spread across four instruction booklets, so it’s easy to take a break between them. With every element being something different it also doesn’t suffer from being repetitive, so there’s never any loss of interest when building.

Starting with the base camp, there’s a nice natural colour palette of greens and tans. Inside seems more like something from Jurassic Park though, with clinical white counters and an egg kept in a trans-blue element incubator. There’s also a microscope built to minifigure scale, which uses binoculars for the eye piece while a 1×2 round tile acts as a specimen slide.

One slightly odd design choice is having a coffee cup on the floor – monkeys on caffeine is definitely not a good idea.

Considering this set is only just over 500 pieces, things go a little awry with the watering hole. There’s not really enough pieces to do it justice, so it’s mainly comprised of large 8×16 plate elements. While this does give the landscape size, the realism takes a tumble. Each plate is connected using angled pieces, which creates hard edges, and straight lines don’t exist in nature.

There is some nice foliage greebling, including the return of the classic LEGO bush element (now made from plant plastic), and leaves on the water imitating lily pads. But when everything is connected it just looks too flat, and it’s also quite flimsy, so to move around safely the plates really need to be taken apart.

Adjoining on to the watering hole is a small cliff that hides the working function of 60302 Wildlife Rescue Operation. A Technic pin runs up the length of the tree, which can be overturned by the push of a lever. Once the tree falls, it knocks into the boulders to create a landslide. Don’t expect an Indiana Jones-style effect though, because the rocks only move a little. During play the mechanism isn’t that dramatic, and loses its novelty pretty quickly.

Thankfully, helping to populate the watering hole are the new LEGO animal moulds, and they are fantastic. The adult elephant is the same as the one in 60307 Wildlife Rescue Camp, but uses tooth elements for shorter tusks, possibly to suggest this is a female (though the tusks don’t vary much between either gender). However, 60302 Wildlife Rescue Operation is the only set in this wave to include the adorable elephant calf, which has a trunk that’s able to carry plants or fruit.

The new crocodile mould is equally impressive, improving on the 2015 version by having a Technic pin in the tail that allows it to twist back and forth. Printed eyes finish the head sculpt, and the pupils are slitted to give the crocodile a true reptilian look. Interestingly, one of the eggs is unique, and has also been printed with a baby crocodile escaping its shell. It could easily double as a velociraptor for the more dino-inclined…

To help in the rescue mission is a caterpillar vehicle that looks almost like a space rover meets an off-road truck. For a 6+ set, the design is pretty inspired. A minifigure can easily sit inside the interior, which is finished with a steering wheel and printed dashboard, while the outside has a 1×4 ridged grille element and rubber caterpillar tracks to give the vehicle its off-road appearance. Indeed, even though it says 6+ on the box, the build actually has some rather fiddly elements, from attaching the rubber treads over the wheel rims to building the helicopter.

Most LEGO sets in this age range would use moulded elements for something like a helicopter, but the one in 60302 Wildlife Rescue Operation is completely brick-built except for the cockpit element. It has plenty of realistic details, including turbine engines and a working winch mechanism (which requires the dreaded tying a knot on to a hook piece). The finished model is sturdy, and the perfect size to fly around the living room or garden savannah.

60302 Wildlife Rescue Operation really focuses on the wildlife, so there are only four minifigures included. However, they are all exclusive to this set – though some of the torso elements, like the vet design, can be found throughout this LEGO CITY wave.

There’s some great printing, including pockets and the paw-print rescue symbol that decorates the vehicles. The helicopter pilot also has a really intricate vest, and there’s a nice balance of characters and representation.

60302 Wildlife Rescue Operation retails at £79.99 / $89.99 / €89.99, making it the second-most expensive set in this wave, with a price of 15 pence per piece in the UK. This is likely due to its many unique elements and the new moulds in the set. Considering its multiple role play opportunities, and that most of it is well designed, it’s not bad value for money.

However, the main play feature of the watering hole and rock slide is lacklustre at best, which detracts from the rest of the set. As it has been on shelves for nearly a year, there are some good deals to be found and at that point 60302 Wildlife Rescue Operation is definitely worth it, if only for the animals and the fantastic helicopter.

Out of the four sets released in this LEGO CITY animal rescue range, 60302 Wildlife Operation is definitely one of the best, putting its 525 pieces to good use. It has every element needed for exciting role play, and the vehicles are substantial enough to survive even the roughest savannah.

While fans may initially be drawn to this set due to the new animals, there’s plenty here to enjoy beyond them. The simplistic landscape could also be improved by combining this set with another from the wave, like 60301 Wildlife Rescue Off-Roader, or just adding more foliage elements to make it more visually interesting.

Support the work that Brick Fanatics does by going on a safari for purchasing your LEGO City sets through one of our affiliate links.

How long does it take to build LEGO CITY 60302 Wildlife Rescue Operation?

60302 Wildlife Rescue Operation will take about an hour and 30 minutes for an adult to put together, with the vehicles taking the longest time. A younger builder will likely take considerably longer, as this set isn’t as easy as its 6+ label suggests.

How many pieces are in LEGO CITY 60302 Wildlife Rescue Operation?

60302 Wildlife Rescue Operation comes with 525 pieces, including four unique minifigures. There’s also one of the new crocodile elements, a unique hatching egg, and a baby elephant exclusive to this set.

How much does LEGO CITY 60302 Wildlife Rescue Operation cost?