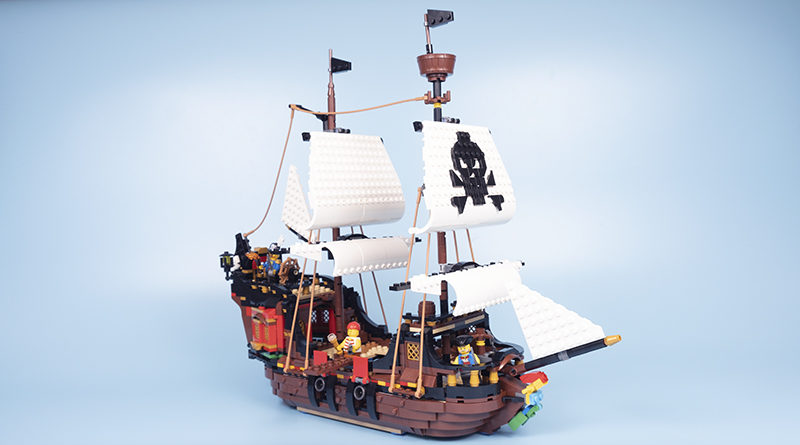 LEGO Pirates fans are a patient band of privateers. Every five or six years they get another opportunity to revisit the seven seas in the LEGO brick, but rarely is it as satisfying as the original theme that launched in 1989. LEGO Ideas delivered the ultimate nostalgia trip with a set that is also an incredible model to build in 21322 Pirates of Barracuda Bay, which is sure to delight fans of the classic theme.

But that doesn’t mean that 31109 Pirate Ship should be overlooked, because this particular vessel does something very different. It is not as overtly inspired by the classic theme as the LEGO Ideas model, it is not primarily aimed at adults and it does not use cloth sails or moulded hull pieces. This is a demonstration of how to do pirates if LEGO Pirates never existed (well, excusing the use of treasure chest, barrel and crow’s nest pieces).

How does a traditional LEGO Pirates ship get started? With large, moulded hull pieces. They make the beginning of the process more manageable, but are not really in the spirit of LEGO creativity. 31109 Pirate Ship goes down the route that the Creator theme is known for, eschewing those large pieces and instead demonstrating how the same effect can be achieved with hundreds of small elements.

The beginning of the build demonstrates how the whole process will work, with the ship built in three rough sections. Starting from a plate, slopes give a nice base to the ship before SNOT bricks are added. These allow the ship to be covered in brown tiles, with the odd plate adding some studded texture to give it a nice LEGO feel.

It’s surprising that despite this set not using the moulded hull pieces, it quickly feels like a classic LEGO Pirates building experience. That might be because the same staples are incorporated, such as the spaces for the cannons, the lower deck and the rudder.

Things are a little more sophisticated, especially for a set focused on a younger audience, when it comes to the front and back of the ship. SNOT sections using brown arch and slope elements create a curved shape. Even more than that though, the layers give the impression of wood panels, meaning that attention is being paid to creating texture as well as form.

The LEGO Group has been open in recent years about the ‘build experience’, with research and effort being put into the instructions and model development to make putting it together as enjoyable as possible. This includes removing unnecessary complications. When constructing this set, interior bricks are coloured in blue, green and red – it makes it very simple to see which end of the set new bricks should be added to.

As with the finest ships from the LEGO Group’s history, the stern of the ship has an ornate section that uses red and gold elements. Hinged walls on either side open up to provide access to the captain’s cabin, which includes a chair and desk with treasure map. It’s spot like this where it’s easy to notice how much more detail was packed into 21322 Pirates of Barracuda Bay.

For the ship’s rigging, there’s a new flex tube element in medium nougat. It does the job, but it’s a slightly strange piece and it’s debatable whether it offers anything more than traditional string does. It fulfils its purpose at least.

Building the sails themselves is fairly straightforward, with white plates adorned with black elements to create a skull and cross bones. The brick built sails are likely to be the biggest point of contention for LEGO Pirates fans, as they will contrast with the fabric sails of previous ships and visually won’t align perfectly.

That is precisely the reason though that collectors should consider this set. With a number of traditional LEGO ships released within the Pirates theme over the years – and Ideas theme paying homage – this offers a rare change of pace, demonstrating how a ship can be built without those traditional LEGO cloth sails. For the curious fan, this is well worth building, at the very least for the sake of variety.

If that beautiful ship is dismantled, fans can build either a creepy skull island or an appealing tavern using the alternate instructions. Both models are worth the time, with the tavern in particular providing something rarely visited in the LEGO range.

Had 21322 Pirates of Barracuda Bay not recently been released, with its charmingly updated classic LEGO Pirates characters, the minifigures provided here would have been more exciting.

The two crew members are unremarkable, but the captain offers some novelty. He uses the 2015 face print, but features a new skull and cross bones hat, a new torso and a silver peg leg. With how rare new pirate minifigures are, fans will be delighted to have a new sea dog to add to the collection.

LEGO Creator sets tend to be some of the best value releases in the range, but given the size of the main model in this box and the piece count, fans will be delighted by how little treasure is required to acquire 31109 Pirate Ship. It’s such good value that were it discounted, it would be worth buying twice again so the three alternate models could be displayed together…

If it hadn’t been for the launch of 21322 Pirates of Barracuda Bay earlier this year, this would have completely delighted LEGO Pirates fans. As it stands though, it is the second best sea-faring vessel released in 2020. While 21322 offers a more nostalgic experience, 31109 Pirate Ship offers something unique thanks to its more traditional brick-built methodology, and is therefore worthy of being in every buccaneer’s collection – as long as they already own 21322 Pirates of Barracuda Bay.

31109 Pirate Ship is available now at at LEGO.com. You can help support Brick Fanatics’ work by using our affiliate links.