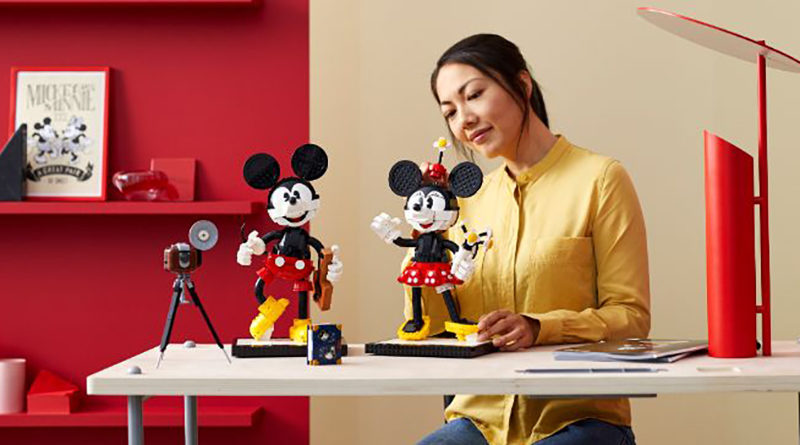 Well this is different! After three incredibly appealing LEGO Disney sets for adults, all of which were perfectly calibrated to get die-hard Disney dweebs drooling, the LEGO Group has moved away from minifigure scale for 43179 Mickey Mouse and Minnie Mouse Buildable Characters.

The newly announced 1,739 piece set builds two figures of Disney’s two most famous characters, Mickey and Minnie Mouse. The pair have turned up a few times in the last few years, as minifigures in 71040 The Disney Castle, a bit squarer as LEGO BrickHeadz and based on their very first appearance in 21317 Steamboat Willie.

While hardcore Disney fans might have preferred another theme park based set to expand their world, large scale figures of these icons is still a nice concept. The challenge that the designers must have had is deciding how to depict them – after all, Mickey and Minnie have been illustrated and animated in many different ways over the years.

In recent years, Disney has been releasing Mickey Mouse shorts that are inspired by the earliest adventures of Mickey and friends. The stylised animation presents the characters In a way that is quite different to the way they have otherwise been depicted since the 1980s, both in the characters’ look and personality.

It seems that the LEGO Group have followed this design for these statues, with round bodies and thin limbs. The printed eyes are also based on this look. Because the animation is 2D, the heads do not quite capture the look of Mickey and Minnie in the shorts as well as the bodies do. The characters look fine, but they do not have the ‘wow’ factor fans hope for, which is perhaps because the animation style is so hard to capture in three dimensions.

Given the many different looks that Mickey and Minnie Mouse have had over the years, it makes sense for the LEGO design team to have opted for a stylised look. It may have been wiser to go more stylised though, maybe even deviate from the animation completely and come up with a fresh take on the duo. Those who know the characters from other media than the shorts might not find them cute enough.

Depicting such familiar characters as LEGO builds must have been a challenging task, especially doing so in a way that makes for a fresh model, and this set may yet look better in person. Based on these images though, it looks like the LEGO Group is releasing an acceptable model in 43179 Mickey Mouse and Minnie Mouse Buildable Characters – but not one that blows expectations and minds as 71040 The Disney Castle did.