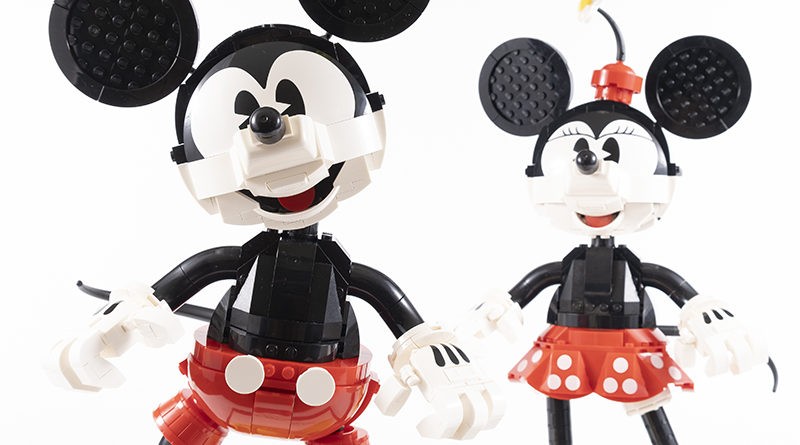 Disney’s most beloved characters stand side by side, as they have for more than 90 years, in LEGO 43179 Mickey Mouse & Minnie Mouse Buildable Characters

71040 The Disney Castle launched in 2016, marking the first time that the LEGO Group had released a Disney set for adults. It has proved popular among fans thanks to the way it perfectly captures the silhouette of the actual Walt Disney World location at an impressive scale thanks to its 4,080 pieces. While less iconic, 71044 Disney Train and Station accurately captures its theme park inspiration at minifigure scale.

This time around, it seems that the LEGO Group is seeking a broader audience than theme park enthusiasts. Moving away from minifigure scale, 43179 Mickey Mouse & Minnie Mouse Buildable Characters offers the opportunity to build two statues of the characters that are over 30cm tall. As the best known, most multi-generational characters in the Disney pantheon, it’s a set worthy of Mickey and Minnie’s status in pop culture.

Over the almost century long life that Mickey and Minnie have had, their designs have evolved and developed. They have  been presented across a variety of media – feature films, animated shorts, television specials, theme park content and much more. For this set, the designer seems to have been most influenced by the Emmy award winning Mickey Mouse animated series that launched in 2013, which in turn is influenced by the early Mickey Mouse shorts such as Steamboat Willie.

Putting the almost 2,000 pieces of this set together is – to borrow a word from the LEGO Group’s marketing catchphrase – a joyful experience. A favourite Disney album playing in the background is optional, but recommended. The building switches from the usual LEGO experience of constructing intricate, carefully calibrated interior sections with typical elements to putting together unusual pieces in original ways to capture the unique shape of these icons.

A small but important delight in the set is how the bases for the figures are constructed. To make them look like film cells, the aeroplane window elements have been used with 35315 Glass For Frame 1X2X2 in a new colour, which when lined up give the perfect aesthetic. Practically, the bases balance the figures out, carefully holding their feet in place so they don’t topple over as they would were they free standing; visually they give the vibe that Mickey and Minnie have popped out of a film reel.

The parts used in the set are incredibly inventive. Given the scale that the designer was working at and that the majority of the statues are smooth, it must have been a case of raiding the parts library to see what would work at this scale. In the case of Minnie’s dress, a car windscreen and sloped elements have been given new decoration to capture the flowy shape. As for Mickey’s shorts, the familiar tub turns up in red, and the uninitiated would have no clue that it was never intended for this purpose. The black Space helmet for the noses is too perfect, looking much better than it sounds like it would.

6305216 is a new element for this set, a curved tube that uses a Technic axle connector. Its invention seems entirely justified, as it is hard to imagine the curves being captured as smoothly any other way. It allows the characters to have the springy, animated feel that they do in the Mickey Mouse series, that would have looked too rough and rigid with a solution that required more individual elements.

There are many more examples of where a part is used in a way that fans will not have seen before, but it would be a shame to spoil any more here. Suffice to say, this set demonstrates a certain kind of LEGO creativity that AFOLs have been practicing for many years.

There is attention to detail throughout this set, starting right down at Mickey’s chunky, oversized yellow shoes. All the way up the bodies, the proportions and shaping match the way the animated characters have been represented in the aforementioned animation, with the ears on the heads scaled to create the unmistakable Disney silhouette.

Given the ingeniousness of the parts usage throughout the model, it is perhaps a shame that a brick-built solution was not used for the character’s faces. The printed elements do look excellent though and a perfectly scaled to the proportions of the builds.

The team behind this set have captured not just the design of the characters, but as importantly their personalities. Mickey looks as if he is about to come to life, ready to take a jaunty step, while Minnie is striking a typically elegant pose.

Even without the accessories, these two characters look great stood together. Given the black, white, red and yellow though, the designers clearly felt some splashed of other colours would help complete this duo. The banjo, photo album, camera and flowers are all built in a wonderfully exaggerated Disney animation style that fits with the two figures.

Displayed side by side on a shelf, these characters can’t help but bring a smile. While many fans adore minifigures and models scaled for them, this is a reminder that something different can be equally delightful, especially when it is such a novelty. By evoking the personalities as well as the literal look of the duo, the designers have come up with something that is in contention for the best LEGO character set ever. The LEGO Group continue to impress this year, as 43179 Mickey Mouse & Minnie Mouse Buildable Characters is an easy set to whole heartedly recommend.