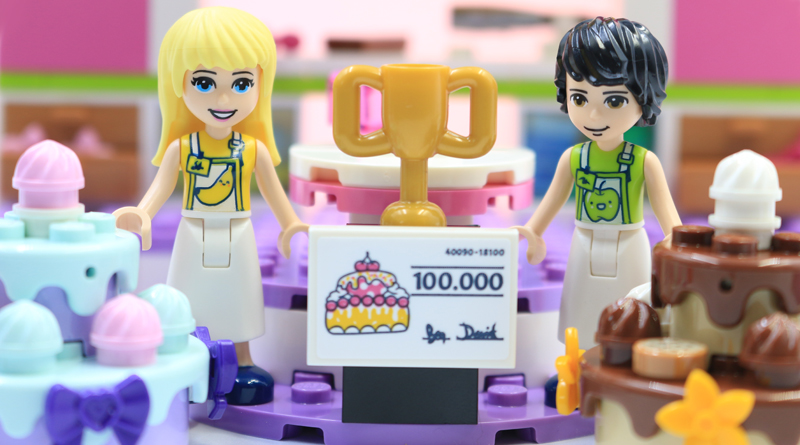 It is time to have The Great British Bake Off, Cupcake Wars or any other televised food contest with LEGO Friends 41393 Baking Competition

From local fêtes and school fairs, to shows on television such as the Great British Bake Off in the UK or Cake Wars in the USA, baking competitions are unbiquitous. Everyone has helped out in the kitchen at some point, whether whisking brownie batters or pinching ingredients for a tasty nibble, so 41393 Baking Competition is extremely relatable, but is it a sweet treat to build?

While both kitchen workstations are built in exactly the same way, they are thankfully not that repetitive as the appliances included for each are different. Stephanie has a brilliantly designed blender that uses an upturned transparent case, whilst David’s rolling pin is made from a Technic tube with a bar through the middle creating the handles. Another neat aspect that separates the two are the different colours used, reiterating the fact that this is a competition with opposing teams. Obviously LEGO food is also included, along with kitchen utensils for both Friends mini-dolls – and a fire extinguisher in case flambéing goes wrong.

In front of each workstation is the cake that each character is baking, and these use some very interesting new elements. Alongside the typical 1×1 icing swirls are 2×2 and 4×4 circular plates with an icing drip effect moulded around the edges. What use these have outside of culinary concoctions is anyone’s guess, but it’s likely the LEGO designers will find ingenious places for them in other sets.

Between the two workstations is the main podium for the judge and what might not be immediately apparent, but is a fantastic piece of design, is that the curved arches recreate the outline of an actual cake. Shelves are stacked with even more role-playing accessories, whilst the two refrigerators open up the age-old debate of whether or not eggs should be kept in the fridge. One annoying thing about this part of the build though is how small and fiddly everything is to put into place, which younger fans may find frustrating.

The cherry on top for difficulty is the spinning LEGO wheel crowning the podium – eight stickers need to be neatly placed and their order is not shown in the instruction booklet, but rather on the box-art, which is very confusing.

All three mini-dolls are unique to 41393 Baking Competition, and this is only the second appearance for both Lillie and David in the LEGO Friends theme. The printed apron torsos are really detailed, including even the buckles on the shoulder straps and tiny name badges. Lillie looks a bit fancier than her 41379 Heartlake City Restaurant debut, with pearl-gold accents on her shoes and chef’s whites.

41393 Baking Competition is an extremely engaging LEGO Friends set that is interesting to put together but will also satisfy fans as a finished build, with plenty of details to enjoy. The best part is there’s no risk of flour being sifted everywhere, nor any washing up required afterwards.

41393 Baking Competition is available now at LEGO.com. You can help support Brick Fanatics’ work by using our affiliate links.