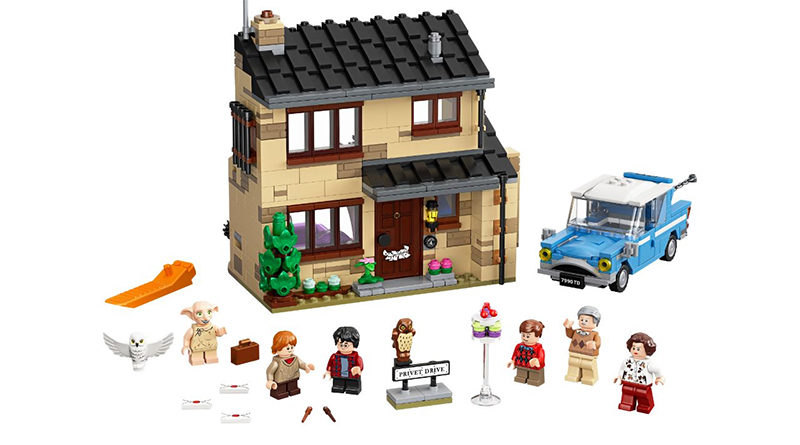 New LEGO Harry Potter sets are on the way, with new characters to collect, locations to recreate and even creatures to build – Brick Fanatics shares first impressions on these upcoming releases

So far the LEGO Harry Potter theme has offered sets chronologically, film by film, for fans to enjoy. However, the LEGO Harry Potter sets coming later this summer break that trend better than Ron Weasley broke his wand. Thankfully there are no slugs in sight and this wave is the most varied yet.

What, or rather who, immediately stands out the most is 75979 Hedwig because she’s like nothing that has come before in the theme. Hedwig might not have magic, but she’s almost as famous as Harry himself, and this display model looks to include some functions that will really portray the owl’s character, particularly the rotatable head with those striking yellow eyes.

Owls and letters is of course how the Harry Potter saga began, and for the first time in eighteen years, Privet Drive is back in the brick. Not only that but 75968 4 Privet Drive is also the first time fans can get all of the Dursleys as minifigures, making this a must-have set for Potterheads. Inside looks to have some great details, including Harry’s cupboard under the stairs and what could be printed on the tiles in the bedroom – spells, the Daily Prophet or maybe photographs?

This year actually seems to be the year for wizarding homes, with the Weasley’s crooked house having a major upgrade since its 2010 incarnation. The designers have managed to angle the floors of 75980 Attack on The Burrow perfectly and the build is sure to use some interesting techniques, especially for the different windows, to recreate the ramshackle aesthetic of the building. It does appear a bit cramped on the inside, but that actually suits the Weasley home.

Following on from 75945 Expecto Patronum (review) are two more adorable LEGO patronuses that use completely new moulds in 75966 Hogwarts Room of Requirement. Hermione’s otter and Luna’s hare look incredible, although 75966 missed the opportunity to include some play feature to actually make the patronuses appear as if they were flying through the air. Will it be possible to incorporate this set with the rest of Hogwarts Castle? Hopefully yes, and the instructions will be fans’ equivalent of the Marauders Map, explaining the entire layout.

On the topic of of Hogwarts Castle, the wizarding school is getting yet another extension, so fans better forget using the dining table for eating, or the shelves for books, because attaching 75969 Hogwarts Astronomy Tower onto the rest is going to create a massive display. 75969 is adding some much more unusual locations from Harry Potter and the Half Blood Prince, including Ravenclaw Tower and Professor Sprout’s greenhouse – complete with venomous tentacula plants. Professor Horace Slughorn is also making his minifigure debut and the use of LEGO pumpkin pieces as the Chinese lanterns decorating his party is inspired.

Out of this fantastic wave though, there is one set that is definitely going to divide opinion – 75967 Forbidden Forest: Umbridge’s Encounter. That huge figure of Gawp, Hagrid’s younger brother, is clearly inspired by the giant Ant-Man from 76051 Super Hero Airport Battle, and hopefully those exposed ball-joints and Technic pins won’t look as obvious in real life. Certainly Gawp’s expression is extremely sweet, perfectly capturing his innocent nature, and the 1×1 bowed tiles as little ears look very cute.

Just when fans think the LEGO designers have pulled the last trick out of their magic hat, along comes a new wave of sets to cast a spell over fans – and a hex over their bank accounts. As muggles with no access to time-turners, fans will have to patiently wait until June for the next LEGO owl delivery of these appealing look Wizarding World sets.