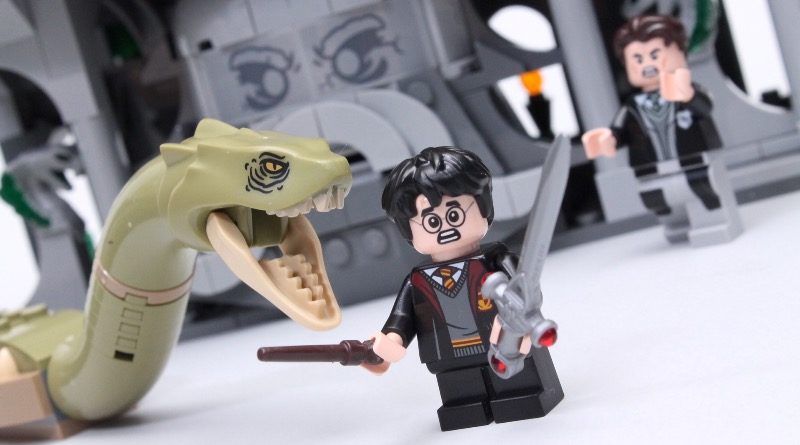 The LEGO Group finally updates a pivotal Harry Potter location in 76389 Hogwarts Chamber of Secrets – but with one eye firmly on 2001, can it live up to the theme’s recent legacy?

In what at first glance seems like a bizarre move, this summer’s Harry Potter sets have effectively pushed the great reset button on the huge Hogwarts display we’ve all been working towards since 2018. Instead, the LEGO Group has delivered a brand new take on its modular approach to the wizarding school, while at the same time celebrating the 20th anniversary of the very first wave of Harry Potter sets from 2001.

While that’s bad news for those of us knee-deep in the likes of 75954 Hogwarts Great Hall and 75948 Hogwarts Clock Tower, the trio of Hogwarts sets that combine across this summer’s wave could prove to be the perfect jumping-on point for fans just embracing the wizarding world.

That places a lot of pressure on 76389 Hogwarts Chamber of Secrets to succeed, because if this long-awaited modern take on the home of the Basilisk fails, you might find this summer wave of sets all too easy to pass up altogether…

Probably the first thing that jumps out at you from the latest batch of Hogwarts sets (beyond those sand green roofs, which ape an aesthetic now two decades old) is just how rigid and boxy they are. That’s a very deliberate design choice, because it’s exactly what allows 76389 Hogwarts Chamber of Secrets to combine with both 76386 Hogwarts: Polyjuice Potion Mistake and 76387 Hogwarts: Fluffy Encounter in a wider Hogwarts display.

It’s not the only means by which those sets could have combined, however – the previous few years of Hogwarts models have been content to simply sit side-by-side, joined with Technic pins – and it represents a pretty risky move on the part of the design team. After all, building around inflexible dimensions could easily lead to a repetitive, restricted experience.

Thankfully, that’s not what’s happened at all. Yes, you’re essentially building a series of stackable boxes, but there’s enough variety between them and inside them that you never really get bored. And much like in the Modular Buildings Collection, placing those levels on top and alongside one another is just really satisfying.

It does mean there’s a real compartmentalisation to 76389 Hogwarts Chamber of Secrets’ build, however, which would have benefited massively from multiple instruction manuals to allow simultaneous construction. As is, it at least facilitates natural breaks in the build – even more so than the numbered bags.

Beyond its new approach to modularity, the other major departure in 76389 Hogwarts Chamber of Secrets from the Hogwarts sets that have come before is in its aesthetics, which purposefully call back to the classic Harry Potter line-up from 2001 and 2002.

Those waves of sets combined into an enormous, sprawling Hogwarts display – one we might one day reach again if the LEGO Group reverts back to its previous format from 2022, or even sticks with this one – but lacked the detail and sophistication of modern-day sets.

76389 Hogwarts Chamber of Secrets straddles the line somewhere between 2001’s 4709 Hogwarts Castle and 2018’s 75954 Hogwarts Great Hall, though obviously leans much closer to the latter than the former. (The roof is brick-built, for one.)

It does mean that the exterior detail we’ve come to expect from the renewed Harry Potter line isn’t entirely replicated here, nor the authenticity and scope of those recent sets – we get yet another Great Hall as part of 76389 Hogwarts Chamber of Secrets, for example, but it’s not a patch on 75954.

Instead, the real joy to be found in those sand green roofs and Big, Ugly Rock Pieces (or BURPs) that comprise most of the base is in how they celebrate classic designs – but that will only really matter to you if you’re of a very particular age, which is to say if you played with those original Harry Potter sets as a kid.

If you didn’t, the beauty of 76389 Hogwarts Chamber of Secrets is mostly on the inside. Flip the set 180 degrees, and you’ll be met by an interior that happily lives up to modern Hogwarts sets within the space available to it.

Hallmarks of those models – from the new candle piece to flags, stickered details and frogs (so many frogs) – litter every corner, filling every available nook and cranny across the aforementioned Great Hall, the Defence Against the Dark Arts classroom, Gilderoy Lockhart’s office, the astronomy tower, and the Chamber of Secrets.

That detail is almost to a fault in some regards, though, because while there are plenty of characters to populate those rooms (as we’ll touch on later), you’ll find that most of the play in the bottom half of the set actually happens beyond the confines of the model itself.

The box art hints at as much, with minifigures positioned adjacent to the castle, but there’s really just not much room at all in the Chamber of Secrets, with the bulk of the structure dedicated to the Basilisk’s entrance through the buildable statue.

It’s a neat feature, disguised in a removable sub-assembly – but between that and the snake statues either side of it, you’re really left wanting for a more expansive play area, matching the one created by 2002’s 4730 The Chamber of Secrets.

That would likely have required a dedicated, standalone set for the chamber, however, and would therefore have been very tricky to incorporate into the recent Hogwarts sets in a way that didn’t require a tonne of extra BURPs, platforms and grey bricks.

You can see why the LEGO Group went this way, but it doesn’t make it any less disappointing that in a £130 set – and nearly 20 years after the last one – you’re still getting a pretty small Chamber of Secrets. And in that sense, it may be the one place the new modular approach falls down, because it restricts just what the LEGO Group might otherwise have been able to do with this location.

It’s a relief, then, that what is there is superb: the buildable statue has plenty of LEGO charm, requiring just two stickers for the eyes; the circular entrance covered in stone snakes feels authentic to the movie; and this is a much-improved Basilisk compared to the one in 75954 Hogwarts Great Hall, even if it is still a little too small.

A set of this size commands a minifigure selection to match, and in that department, 76389 Hogwarts Chamber of Secrets definitely delivers – and then some. A total of 10 characters (plus Goldemort) are included to populate its various rooms (although as mentioned, there’s some difficulty placing them in the chamber itself), and they run the gamut from the obvious to the obscure, while also encompassing all but one Hogwarts house.

That means there’s a great opportunity to flesh out your student population, with the first-ever minifigures of both Colin Creevey and Justin Finch-Fletchley representing Gryffindor and Hufflepuff respectively. Any other Ravenclaw would probably have been preferable to yet another Luna (unless it was Cho) – as would a new ghost instead of another Nearly Headless Nick, even if this one does glow in the dark – but you can’t win ‘em all.

76389 Hogwarts Chamber of Secrets also deserves praise for bringing together characters previously difficult to come by, whether because they were in expensive sets (Gilderoy Lockhart) or random books (Tom Riddle). Throw in another brilliant Dumbledore variant and a deep cut in Professor Sinistra, and you’ve got the makings of an almost perfect minifigure selection. Plus, those Cornish Pixies genuinely are perfect…

76389 Hogwarts Chamber of Secrets is the most expensive minifigure-scale section of Hogwarts to date since the Wizarding World theme re-emerged in 2018, but it builds into a set that feels far more substantial – and therefore far better value – than the likes of 75969 Hogwarts Astronomy Tower.

That’s partly due to how much it expands horizontally as well as vertically, but it’s also by dint of the boxy, modular approach that benefits its expansion, 76386 Hogwarts: Polyjuice Potion Mistake. The end result might not share the same detail or scope as the previous Hogwarts sets, but it’s tough to argue with the way this year’s Potter sets update and redefine the combinable sets of 2001.

There’s a lot to be said for 76389 Hogwarts Chamber of Secrets’ new approach to the wizarding school. Moving and rearranging the castle’s rooms (when combined with the two smaller sets in this wave) feels satisfying, and it hasn’t come at the cost of detail or variety.

What it has come at the cost of, though, is a set that can truly do justice to the Chamber of Secrets. Beyond sliding the minifigures in (which can only really happen when you add 76386 Hogwarts: Polyjuice Potion Mistake) and slithering the Basilisk through the stone statue’s mouth, all the action actually happens adjacent to the model itself.

But if that’s our only criticism – and really, it is – then you can still chalk 76389 Hogwarts Chamber of Secrets up as a success. It feels simultaneously authentic to both the movies (through its interior detail) and the charm of the original 2001 wave (through its colour scheme, external aesthetics and modularity), and in that sense feels perfectly pitched as a 20th anniversary set.

How long does it take to build LEGO Harry Potter 76389 Hogwarts Chamber of Secrets?

Expect to spend roughly three hours assembling 76389 Hogwarts Chamber of Secrets. Some of that will be spent applying stickers, but none of them are truly difficult.

How many pieces are in LEGO Harry Potter 76389 Hogwarts Chamber of Secrets?

76389 Hogwarts Chamber of Secrets contains 1,176 pieces, among which are a decent handful of glow in the dark elements (including an entire minifigure in Nearly Headless Nick).

How big is LEGO Harry Potter 76389 Hogwarts Chamber of Secrets?

With all rooms clipped together, 76389 Hogwarts Chamber of Secrets stands tall and wide, measuring 40cm in either dimension, and comes in at 11cm deep. That’s before you start adding on rooms from the expansion sets…

How much does LEGO Harry Potter 76389 Hogwarts Chamber of Secrets cost?