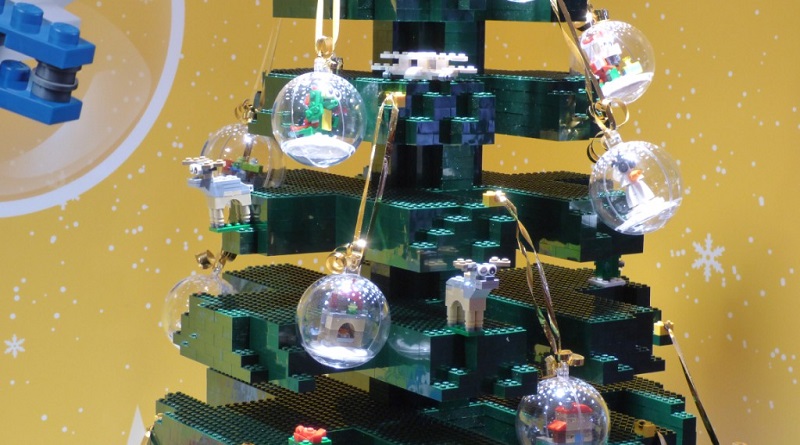 With the Christmas shopping season underway and LEGO Overwatch due to launch in the new year, Brick Fanatics speaks to Marius Lang, the LEGO Group’s Head of Marketing for UK and Ireland

Each year, the toy industry gathers in central London for DreamToys, an opportunity to remind everyone that the year’s biggest holiday is on the way and that there is a wide selection of toys available that might belong under the Christmas tree. Brick Fanatics finds just such a tree built using LEGO bricks at the 2018 event, with five LEGO sets underneath it – all selected by the DreamToys committee as some of the best products available during this festive season.

“We are very proud to see the five products as part of the DreamToys list,” says Marius Lang, the LEGO Group’s Head of Marketing, UK & Ireland. “We have LEGO City, then Harry Potter – which is doing incredibly well – with two sets, 75954 Hogwarts Great Hall and 75955 Hogwarts Express. We have Jurassic World, which was a big thing in the market this year, dinosaurs always do well with kids. Then you have our minifigures range – it is a very special year. For the 40th anniversary, being nominated in the collectibles category is great.”

It is clear that Harry Potter is a big deal this year – wandering around the various displays, many of the toy companies attending have wizarding products available. “Harry Potter, since it came back to LEGO in August, is doing so well for us – adults, kids, they are all very happy to see the iconic characters come back in brick form. We are so excited with the Great Hall making it into the top 12.”

From the LEGO City theme, 60195 Arctic Mobile Exploration Base has been selected by the Dreamtoys committee, which Marius is also pleased about. “It’s not only about the IPs. City continues to do really well in the market, it is one of our key strongholds. So is LEGO Friends. We actually do have two LEGO Friends products in the top 40 year to date.” The figures he refers to are from NPD data, that tracks toy sales – 41335 Mia’s Treehouse and 41333 Mia’s Mission Vehicle are the two sets from the Friends theme that have performed the best this year.

Looking beyond the 2018 range, talk naturally turns to LEGO Overwatch. “We are very excited to come with a new IP proposition, which is kind of different IP proposition,” Marius says. “There are lots of fans out there. We believe it’s a fantastic opportunity because it is a good story about a group of heroes wanting to make the world a better place, fighting for the greater good. There are characters, there are fantastic places, there are very compelling storylines and we really believe with LEGO it will be a great building experience bringing some of those to life. So we are really excited with this to come, it will be available in the UK very, very soon.”

It is the first time that the LEGO Group has taken a video game and released LEGO sets based on such source material. In the past, even the Angry Birds theme was based on the film adaptation rather than the game itself. Has the LEGO Group intentionally looked at this medium for inspiration?

“It’s all about the passions. Whenever we think about a new product, or when we think about a new collaboration with a partner, we really ask kids and parents what they think. If we see that it gains traction with them, it is something we will consider. Overwatch went through this process and we have seen a lot of passion for this, similar to kids being into TV content or movies, they are also into games. They want to build and live these worlds beyond the video game and LEGO is a really great place to start.”

Returning to the purpose of the event, the marketing expert explains why it is important that the LEGO Group focuses on gift giving. “Christmas is a really special time for us as a company. It is a time when parents, the dads, the mums and the kids can play together. We believe that LEGO is a very special toy that enables families coming together, building something, being creative together, imagining stories.”

With the products getting a push through the DreamToys list, and new themes such as Overwatch to look forward, there is plenty of building, creating and imagining to be done in the months ahead.