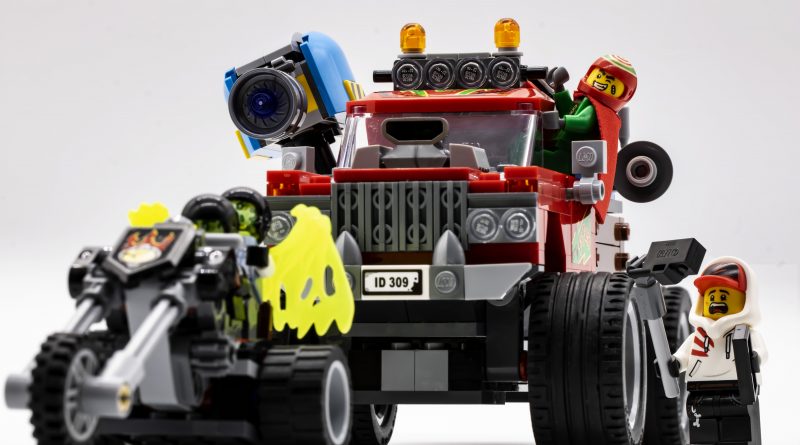 LEGO Hidden Side 70421 El Fuego’s Stunt Truck offers up fans a monster truck for a monstrous theme, but is it the beast that fans are looking for?

Jack and Parker may be LEGO Hidden Side’s main ghost hunting duo, but they are not the only residents who are standing up against the spectral menace that is haunting the fictional town of Newbury. School caretaker Douglas Elton dons a crash helmet to become his alter ego, courageous stunt man, El Fuego. 70421 El Fuego’s Stunt Truck gives fans the chance to build El Fuego’s customised ghoul grabbing monster truck as well as a terrifying trike to chase down. The set also includes four minifigures – Jack and El Fuego along with biker gang members Dwayne and Joey.

The main appeal of LEGO Hidden Side lies in the beautifully designed real world objects and settings cleverly combined with paranormal, spooky elements. Usually a simple twist of a cog, or a pull of a lever will transform an everyday object into a ghoulish alternative. Fans expecting the same with 70421 El Fuego’s Stunt Truck might be a little disappointed. Neither the trike nor the stunt truck have any transformative abilities or any hidden ghostly additions, they are in effect just two straightforward vehicles, so compared to the other sets in the theme this feels a little underwhelming.

The chopper style trike that belongs to Dwayne and Joey is built using a Technic frame, the construction of which feels very simple and a little bit basic. Using stickers for the extra detailing as opposed to printed parts don’t really help matters and the overall look is gappy and somewhat lacklustre. The finished design feels far too squared off in places. Finally, the colour scheme, while being fairly accurate, is just a bit bland too. It is a very disappointing build.

The build for the truck starts off a little more encouragingly with some rare parts used, including metallic silver 1×2 plates with door rail and trans red 1×1 half tiles. Unlike the previous trike build this is a far more enjoyable experience. The front begins to take shape fairly quickly and uses a nice mix of 2×2 slopes and 1×2 sloped tiles to create the front wheel arches. Stickers are used at the front on a 4×2 tile and a 4×2 panel to add some nice detailing.

While the build for the main body might be simple, the detailing that is added on the front, bonnet and roof look really effective and once again utilise nice parts usage. The front grille is built from a 1×6 plate with 1×1 plates with teeth and 1X2 wedge with stud notches. 1×1 teeth are further used as detailing on the bonnet creating a mean and fierce look. The front engine looks great and the detailing on the roof is equally as good using a mix of 1×2 brackets with trans clear 1×1 round tiles, 1×2 wedges with stud notch and trans-orange 1×1 bulbs. Even the wing mirrors, made from 1×1 tiles with clips and pan handles are an effective use of parts.

El Feugo may be a stuntman but he is a ghost hunter too. His stunt truck comes armed with all the latest demon destroying technology. A giant cannon is attached one side and a radar dish onto the other. There is a Technic play feature built underneath the truck that causes the front to tip forward. It works well, but it’s a little hard to work out what it is supposed to represent, raising the question, what’s the point?

Strange play feature aside, once finished the truck does look really good. It’s suitably big and bulky and the ghost busting equipment looks really cool. Packing it all onto the flat-bed on the back makes good use of the space and it feels authentic that all the equipment would be placed here.

Of the four minifigures in 70421 El Fuego’s Stunt Truck, all but Jack are exclusive. As well as his usual printed 1×2 phone accessory, Jack is also armed with a camera and a selfie stick. He comes dressed in his white torso and dual molded hoodie variant and while it is an exceptional minifigure, it would be nice to see some variation in this wave.

El Fuego has the same outfit as Douglas Elton wears in 70425 Newbuy Haunted High School (review), but this time wears his stunt helmet too.

The two bikers are definitely the best of the minifigures. Their ‘Hares of Havoc’ printed biker outfits are both really well designed and very fun. Their legs are equally as well printed but it is a slight shame that only Dwayne has two facial prints. When possessed, Joey sprouts giant demonic wings – a true ‘hell’s angel’. Dwayne’s beard transforms from short and well kept to long and straggly – and it’s a vibrant shade of yellow green too. He comes armed with two yellow green flintlock pistols, exclusive to this set.

This a tricky set to review. On one hand it offers up great play value as both the ghosts and ghost hunters are well represented. On the other, the two builds are slightly disappointing when compared to other sets in the theme. El Fuego’s Stunt Truck is a decent enough model but it’s not enough to elevate the set. There are far more appealing Hidden Side releases in terms of play value, display and fun, so this is perhaps one to avoid, at least at full price.