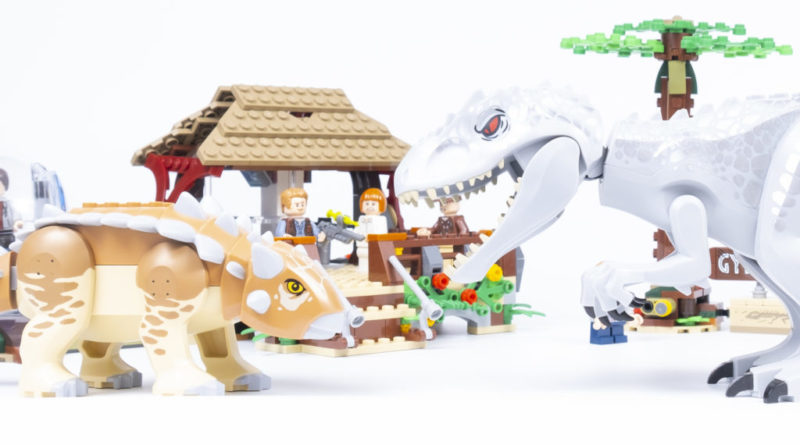 Is there anything for fans in LEGO Jurassic World 75941 Indominus rex vs. Ankylosaurus aside from the brand new Ankylosaurus?

Jurassic World arrived in cinemas back in 2015. Since then, the Gyrospheres have appeared in several LEGO sets, but never with the attraction as it appeared in the film. The human hamster balls turned up in 75916 Dilophosaurus Ambush and 75919 Indominus Rex Breakout, then again in 75929 Carnotaurus Gyrosphere Escape, for the first time with an appropriate launching function.

75941 Indominus rex vs. Ankylosaurus recreates the ride in a way that is pretty faithful to the movie, incorporating a loading area, launch ramp and signage. The main attraction of the set though is the brand new Ankylosaurus and a second opportunity to get the Indominus Rex.

It’s perhaps unsurprising that this would serve an inspiration for a LEGO set. Outside of the dinosaurs and characters, the icons of Jurassic Park are the jeep and the Ford Explorer. In the case of Jurassic World, the dinosaurs – and maybe the main island walkway – are the most memorable parts. Given that LEGO sets seek to be action orientated, the Gyrospheres are the closest the film has to the cars from the 1993 film.

The set builds a sturdy platform, a place where guests queue to wait to ride a Gyrosphere. There’s a shack component to it, where an operator can sit and take tickets. A propeller makes for a great turnstile. This really is though, as it sounds, the least exciting part of a ride.

Where things get more interesting is with a simple but effective launching mechanism for the ball. A tilting launcher allows it to be dropped, which sends the sphere down a section of roller coaster track, with a flex tube guiding it towards the exit – at that point it rolls across the table, ready for the enclosed minifigure to observe dinosaurs from.

The Gyrosphere uses the same elements it has done for five years, cleverly allowing minifigures to stay upright as it rolls along – it remains great fun.

A second model in the set is the signage for the ride, which features stickers that match the movie perfectly. There are trees either side of the sign, which are held in place with a Technic pic – it can be removed to represent dinosaurs sending them crashing to the ground.

This is a set that doesn’t contain any rule-breaking or original build techniques (although the use of robot arms to hold railings in place deserves a mention), but doesn’t need them. For the scale chosen, it accurately represents the Jurassic World ride entrance with a little creative licence used to make for an elegant build.

What feels off about this set is the timing. While Jurassic World smashed the box office in 2015 like a dinosaur smashes visitor vehicles, few people remember it terribly well. The bits they do remember are not about the logistics of how visitors board the rides, leaving the majority of this set redundant. The launcher and Gyrosphere itself are relevant, but the big waiting area feels bland. This would have made more sense as a set that tied in with the film’s release rather than one arriving several years later.

While not characters in the strictest sense, the dinosaurs are definitely the stars of this set – and fans will be buying it for the Ankylosaurus. At this rate, some of the earlier dinosaur moulds will look really dated, as this new beast is perhaps the LEGO Group’s best yet.

Ankylosaurus manages to retain the classic shapes and stylings that make LEGO animals so LEGO, including eight studs on top. The spikes that run from the head, all the way down to the tail, match up well with the way the creatures were depicted in Jurassic World. Printing adds nice detail to the dinosaur, with the slightly animated looking eye design used again.

Indominus Rex is the same mould that appeared in 75919 Indominus Rex Breakout, with entirely new printing a new grey-and-silver colour scheme. New arm elements for the creature fit in better with the usual dinosaur aesthetic. The mould is good and the new colour scheme feels a bit closer to the film than the original, although still not a precise match.

Zach and Gray appear again for the first time since 2015, both offering decent recreations of their characters. Zach in particular has the perfect hair piece this time around, with both minifigures likely to jog a builder’s memory of the film characters.

Owen and Claire are back in this set, with Claire getting a new design that represents her buttoned-up suit. A Jurassic World employee minifigure has a great torso featuring a lanyard and the park logo on his back.

With how expensive LEGO Jurassic World sets are, collectors would be forgiven for thinking that the LEGO Group is genetically engineering these dinosaurs rather than making them from plastic. While the Gyrosphere launcher is fun, the main building is this set is bland and forgettable, so the dinosaurs can be the only justification for getting it. Whether £89.99 or $99.99, the price tag is too high for a set that fans really only want for the Ankylosaurus.

The LEGO Group has seemed to struggle with Jurassic World movie based sets. It’s a franchise about dinosaurs escaping from dinosaur enclosures and running rampant, but fencing doesn’t make for super compelling building toys. In this case, the design team can’t be faulted for looking at a ride from Jurassic World and going for a faithful recreation – but the movie design is so dull that it translates to a dull model.

While the building part might not live up to much, the new Ankylosaurus is excellent, so dinosaur collectors will feel compelled to add it to their collection despite the hefty price on this set. Those who missed the first Indominus Rex release will also be pleased to get a shot at the genetically manipulated beast. As with the films themselves, this set is all about the dinosaurs.

75941 Indominus rex vs. Ankylosaurus is available now at at LEGO.com. You can help support Brick Fanatics’ work by using our affiliate links.